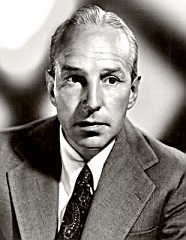 Suspense (1942-1962) aired “Double Ugly” on August 28, 1947 as its 260th episode out of well over 900, almost all still in circulation. As we have noted in many of the previous episodes showcased here, Suspense was one of the top shelf radio shows in all of radio, for CBS spared no expense when it came to production, scripts, musical scores, the quality of its stories, and the top Hollywood (and later tv) talent it drew to the Suspense studio. When Suspense aired its final show in September of 1962, it was generally acknowledged that the Golden Age of Radio was dead, having given up the ghost to the new medium of television. During its decades-long run, however, famed actors such as Jimmy Stewart, Cary Grant, Humphrey Bogart, Lucille Ball, Olivia de Havilland, and many others jumped at the chance to appear on Suspense, as did the star of this episode, Lloyd Nolan (1902-1985). Nolan appeared in many films over his long career (as well as making any number of appearances on top-ranked tv shows), playing both good guy and bad guy (often the good guy as a cop or working with the FBI), and was respected by all who knew him. Of genre interest, he appeared in one of the most famous Outer Limits episodes of all time, the Harlan Ellison story “Soldier” (adapted from his 1957 story “Soldier from Tomorrow” from Fantastic Universe, October 1957) which aired on September 19, 1964. The photo below shows Nolan (as philologist Tom Kagan) with actor Michael Ansara (the lost, time-traveling soldier Qarlo Clobregnny). 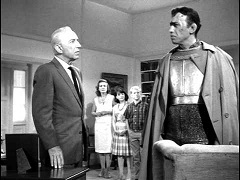 As for “Double Ugly,” it is not your usual horror story, the sort we will be running for the next few weeks in the run up to Halloween. The horror here is of a more insidious kind, though just as evil and deadly. Lloyd Nolan plays his part to perfection, in a role all of us have at times been able to identify with–if not perhaps as totally as the Matthew character here (at least we hope not). Suffice it to say that “Double Ugly” is a compelling drama, perhaps even more so given its morbid nature. It tells a story not easily forgotten, a disturbing look into the seldom explored psychological wasteland of the “Double Ugly.”

{Scared as they might have been from listening to “Double Ugly” in late August of 1947, all of mom’s little monsters nevertheless gathered at the corner newsstand for a soda and a good hour thumbing through their favorite SF magazines, a few of which are shown below. Astounding continued its never-miss monthly schedule, which aside from a glitch during 1932-33, remained unbroken since its debut issue in January of 1930. Thrilling Wonder Stories (1936-55) had several publication schedules throughout its history, but in 1947 was bi-monthly. And old, reliable Weird Tales (1923-54) kept to its long-running bi-monthly schedule in 1947, publishing its usual variety of unusual tales with cover credits in the issue below given to none other than Seabury Quinn and Clark Ashton Smith.} 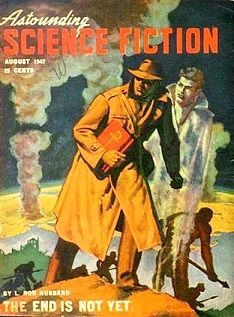 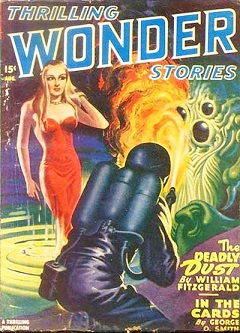 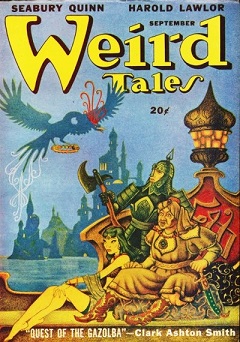