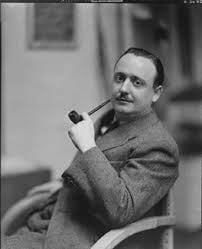 As noted in the introduction to many of the 40+ episodes of Suspense presented here over the past ten years (our last being in October of 2018), it was one of the most well produced, written, acted, and critically acclaimed of all radio shows during the Golden Age of Radio, many a film star jumping at the chance to perform in an episode, among them Cary Grant, Orson Welles, Jimmy Stewart, Susan Hayward, Vincent Price, Charles Laughton, Loretta Young, Peter Lorre, and Rita Hayworth. After many another radio show had gasped its last during the 1950s, Suspense finally closed shop in September of 1962 whereupon radio historians proclaimed the Golden Age of Radio dead, television having become the medium of choice in America.

As for “Cabin B-13,” it tells the story of a whirlwind romance with the newlyweds on a honeymoon cruise. All seems well at first, but when the husband is briefly separated from his gushing bride things turn dark, for he disappears–along with the couple’s room, the title’s cabin B-13–and the bride learns that there never was a cabin B-13, for the number 13 is a superstitious one and no cruise ships number any of their rooms with that number. So we have a missing husband with no record of his existence even after records have been checked and no one spotted him with his bride while boarding the ship, a non-existent cabin, and a frantic young wife who might be crazy. What’s going on here? What can account for all of these strange anomalies?

Suspense aired an earlier version of “Cabin B-13” starring Ralph Bellamy on March 16, 1943. This November 9, 1943 reprise stars Philip Dorn and Margo. The story proved so popular it aired again in December of 1943 as a stand alone production and not an episode of Suspense, and was eventually given its own show under the same name, running from July of 1948 to January of 1949 as a replacement show for Arthur Godfrey’s Talent Scout. The written script was published in the May 1944 issue of Ellery Queen’s Mystery Magazine, and in 1953 the film Dangerous Crossing (starring Michael Rennie and Jeanne Crain) was based on the story, though obvious liberties deviated from the written version. [SF aficionados will obviously recognize Rennie as the alien Klaatu in the 1951 SF classic film The Day the Earth Stood Still.]

{The genre pulp magazines helped keep the unpleasantness of World War II from weighing heavy on the minds of America’s youth, so once again we find the neighborhood gang enjoying their cathartic trip to the neighborhood newsstand where they would fill in gaps in their ever-growing collections. fantastic Adventures (1939-53) was one of several magazines where anything went, no matter how outlnadish the concept or situation, as long as it made for a colorful, page-turning excursion into the fantastic. It was a monthly through the August 1943 issue, then went bi-monthly with the October issue. The December issue below was its second bi-monthly issue and the tenth overall for 1943. The Phantom Detective (1933-53) was popular among genre fans in part due to its hero wearing a mask (as did counterparts the Shadow, Green Hornet, and even the Lone Ranger, emphasizing their mysterious nature) though its stories were grounded in the detective/crime genre. It was a bi-monthly in 1943 but managed to squeeze in a 7th (March) issue before going entirely bi-monthly. Startling Stories (1939-55) was a long-standing favorite and while not noted for its literary merits (even among SF/F magazines of the time), it managed to publish some of the most beloved stories by the biggest names in the field. It was a quarterly in 1943, though the issue below wrapped around the end of 1943 into 1944. It went on sale in December of 1943.] 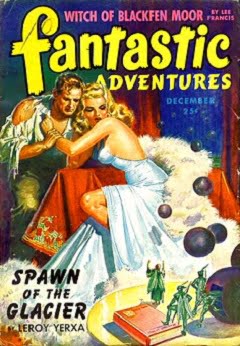 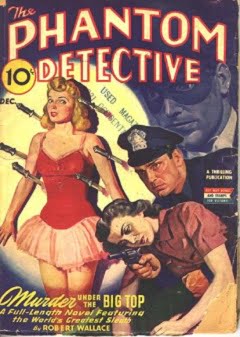 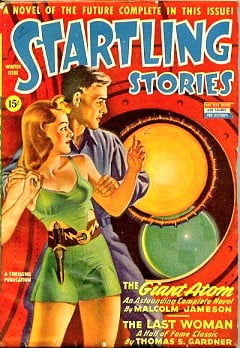