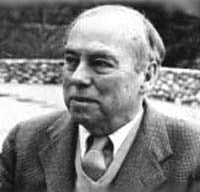 Suspense  (1942-62) aired John Collier’s famous story “Back for Christmas” on December 23, 1943 as its 71st episode. John Collier (1901-1980, photo at right) enjoyed seeing a number of his clever, many times dark or supernatural stories adapted for radio and television. This particular story was adapted thrice over a number of years for Suspense, and was a featured episode of the Alfred Hitchcock Presents television show, airing on March 4, 1956. It was also included in his third collection from 1943, The Touch of Nutmeg and More Unlikely Stories. As to one of its future adaptations, we actually ran one (not starring Peter Lorre) back on December 21, 2013, a new adaptation that aired on Cristmas Eve of 1947. It was a fine episode, make no mistake, but this earlier 1943 treatment starring none other than Peter Lorre (1904-1964) adds a measure of creepiness that I believe you’ll find hard to top.

Cribbing from one of our previous Collier radio adaptations:  John Collier’s monumental collection of dark, smartly written tales, Fancies and Goodnights, would win the second-ever International Fantasy Award (1951-1957) in 1952, beating out The Day of the Triffids (2nd place) by John Beynon Harris (aka John Wyndham), and Ray Bradbury’s The Illustrated Man (3rd place).

“Back for Christmas” is yet another of his devilishly clever tales, as a man schemes to commit the perfect murder for ill gotten gain (and a new, younger wife), only to receive a message from the person he has murdered and…any more would surely spoil the holiday surprise. “Back for Christmas” originally appeared in the October 7, 1939 issue of The New Yorker and we invite you to listen to this fine adaptation, for how better to put a smile on your face than to enjoy a murder during the festive holiday season.

{A scant two days before Christmas of 1943, and thanks to some early Christmas money from grandparents, the neighborhood elves found themselves at the corner newsstand to spend some of their holiday booty on even more magazines for their swiftly expanding collections. Doc Savage (1933-49) filled the bill when it came to fast-paced adventure from familiar to faraway lands across the globe, and it never failed to disappoint. It was a monthly in 1943. Street & Smith’s Detective Story Magazine (1915-53) was one of the most consistent and reliable of the mystery/crime/detective pulps and its longevity was visible testimony to the quality of stories it offered generations of readers. It too was a monthly in 1943. Super-Detective (1940-50), while not one of the major players and having been revived in 1940 afer a multi-year hiatus, nevertheless relied on tried and true formulaic storytelling with a gritty edge to attract an audience. And as with many of the detective (and other) pulps, it almost always featured a female in distress on its covers. It never really held to a regular schedule for long and in 1943 managed 8 issues.] 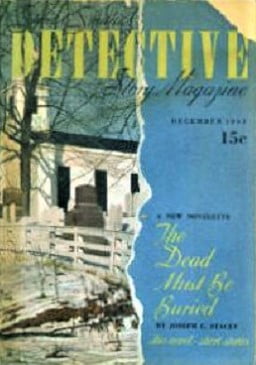