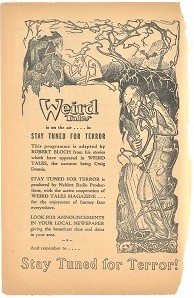 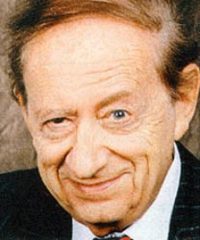 [Editor’s note: This week I am pleased to have the opportunity to offer something special and rare for our Old Time Radio audience. Thanks to the efforts of Golden Age of Radio historian Karl Schadow we present a pair of recently made public (2019) episodes of Stay Tuned for Terror, a program whose shows were written by the master of terror, Robert Bloch, which he adapted from his own previously published stories in early pulp magazines such as Weird Tales, Strange Stories, Fantastic Adventures, and others. The complete 39 episode syndicated series was originally broadcast, as best anyone can determine due to air dates differing widely from market to market, some time in the 1945-46 time frame.  What makes these episodes especially noteworthy is that they are the only ones (to date) to have survived, all other scripts and transcription discs having been lost long ago.
I’d like to express again my thanks to Karl Schadow for his work on this special project, including the historical research for the article below, for securing permission to use the photographs of Berle Adams, Johnnie Neblett and Angelyn Orr, and that of Robert Bloch and his three year-old daughter Sally Francy, with special thanks to Ms. Francy for use of the photograph. So sit back, turn down the lights, make yourself comfortable, and get ready to Stay Tuned for Terror.]
STAY TUNED FOR TERROR
by
Karl Schadow
How did this audio surface after some 75 years since its initial broadcast? David Lennick states that he had obtained the transcription discs from the S. W. ‘Spence’ Caldwell firm in Canada. Caldwell was one of the distributors of the program during the 1940s and 1950s. The discs had not been returned to their original U. S. source (possibly Berle Adams or then current DJ Rush Hughes who handled sales for Adams) and fortunately they had not been tossed into the dumpster. During the early 1980s, David along with a partner had listed the two episodes of Stay Tuned for Terror in an OTR catalog. It is surprising that someone had not purchased these and shared them during the past decades with others in the OTR community. In June of 2019, David posted the audio of both episodes on his Lennick’s Lacquers Facebook page. They were then picked up by Max Schmid who played them during his OTR show on WBAI-FM. The audio is now being widely circulated on the web. The quest continues for additional audio and the ever-elusive scripts. Robert Bloch noted that he did not retain any of the scripts nor audio. Thus, the two episodes presented here are extremely rare recordings.
To the voluminous chronicles documenting the short stories, novels, television and screen plays of one of the Masters of science fiction and horror, Robert Bloch (photo top right), currently added is the work of his most famous radio series, Stay Tuned for Terror. Though this entity has been described by the writer in both Out of My Mind and autobiography (Once Around The Bloch), recordings and scripts have eluded researchers, thus curtailing a detailed account of its history. However, audio (as noted above) of two tales, “Lizzie Borden Took an Axe …” (Episode #27) and “The Bogy Man Will Get You” (Episode #37) is presented here to thrill radio horror fans and Blochophiles.
During the past few years, this author has written extensively on this venture in both Blood ‘N’ Thunder (#46, Winter/Spring 2016, Murania Press) and most recently in The Old Radio Times:  http://www.otrr.org/FILES/Times_Archive_pdf/2020_05%20SeptOct.pdf
This particular discussion of Stay Tuned for Terror will feature a brief history of the program including comments on the two circulating installments. 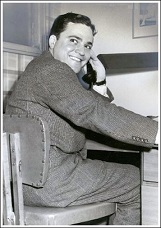 Though various pulp stories of Robert Bloch had been adapted for radio during the mid 1940s, these etherwaves versions were not his craftsmanship. The initial performance of “Yours Truly–Jack the Ripper” occurred January 7, 1944 on the Kate Smith Hour as transformed by Ken Crossen. Although for several years Bloch had a desire to pen his own horror series, this particular broadcast may have prompted him to revisit this passion. The goal was achieved upon collaboration with fellow Milwaukeean, radio actor/announcer James Doolittle. Their creation took them to Chicago where they were able to negotiate with radio packager Johnnie Neblett (president of Neblett Radio Productions) and talent agent Berle Adams (photo at left, courtesy Curt Ladnier) (providing the financing) for a transcribed, syndicated series of thirty-nine, 15-minute episodes. The recording sessions took place at the studios of radio station WBBM during the early months of 1945. Publicity in trade publications had commenced in January of that year with the program first broadcast on WMAQ (also in Chicago) the following May. During the next several years the series was beamed by stations in the Continental U. S., Canada and Hawaii. (At right, 1950 print advertisement, for CJOC, Lethbridge, Alberta, courtesy Arlene Balkansky.)

As many of the scripts were groomed from previous yarns in Weird Tales, the magazine also provided publicity for the series including full page advertisements with artwork by Boris Dolgov (ad at top left). Additionally, Bloch provided this quote in THE EYRIE section of the magazine’s July 1945 issue: “I am very grateful to WT for giving me this opportunity to tell readers about this coming threat to their eardrums … ” However, not all of the scripts were adapted from Weird Tales, seven were remodeled from other periodicals, among them “The Strange Flight of Richard Clayton” (Amazing Stories, March 1939), “Almost Human” (Fantastic Adventures, June 1943) and “It Happened Tomorrow” (Astonishing Stories, February 1943). The last two tales were broadcast under the altered monikers of “The Man Who Hated Machines” and “The Heart of a Robot” respectively. These science fiction thrillers were joined by the occult shockers “Soul Proprietor” (Weird Tales, November 1945) which Bloch’s fellow fiction writer Fritz Leiber praised as the program’s: “… most effective tale…”, and “The Secret of Sebek” (Weird Tales, November 1937). Note that the former was published after the recording of the radio series was completed.

Several of the episodes are members of this unique category (of future publication) including the two for which there is extant audio, “Lizzie Borden Took an Axe …” (Weird Tales, November 1946) and “The Bogy Man Will Get You” (Weird Tales, March 1946). James Doolittle using his stage name Craig Dennis stars in both of these installments with Angelyn Orr the leading actress. (Photo at left: Johnnie Neblett and Angelyn Orr, shortly after their marriage in December of 1945. Courtesy of Larry Zdeb.) Don Doolittle is the announcer who also doubles as Louis in the latter, with Elmira Roessler portraying his wife. The organist who receives credit (with Dennis) in the closing announcements is Romelle Fay, one of Chicago’s pre-eminent musicians. Her rendition of Tchaikovsky’s “Swan Lake” (personally chosen by the program’s writer) is superb. Former Lights Out director Howard Keegan was the helmsman in the control booth.
In addition to modifying the original titles of some stories, Bloch also altered the characters for broadcast purposes. In the Lizzie Borden tale, he devised new names for the radio incarnation which were retained in the pulp version. Note that this story was based on an actual event interwoven with a supernatural theme. This is the same situation for the most reputable drama of the series, “Yours Truly–Jack the Ripper” (Episode #20).
In addition to the recently released audio, there is another newsworthy item regarding Stay Tuned for Terror. In his biographical works of the author, Randall Larson noted that eight stories from the canon could not be assigned to known published sources—of any format. That such a group of dramas created especially for radio exists (both scripts and audio of this group continue to elude researchers) is extraordinary; sporting such titles as “The Hands of Loh Sing,” “Grandfather’s Clock” and “The Man Who Raised the Dead.”
A 1945 issue of the fanzine, Chanticleer contained a parody of the program written by the horror luminary himself. It is an amusing tale not fit for broadcast. In another fanzine from that era The Acolyte, Bloch describes his heavy workload of: “regular duties” (at the Gustav Marx advertising agency], the radio series and also his young daughter Sally, who is seen below on her father’s lap at age three. Today, she is his biggest fan. Help Sally and all of us by promoting Stay Tuned for Terror and keeping your eyes and ears open for anything related to this program. 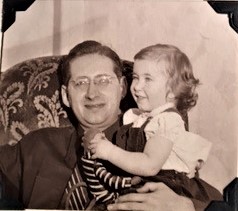 {Below is a sampling of Weird Tales issues where Robert Bloch stories made the cover, and were subsequently dramatized as episodes of Stay Tuned for Terror.} 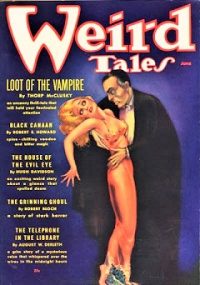 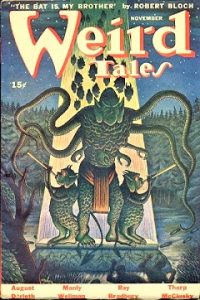 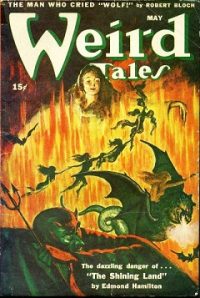 {And here is the cover of the first issue of Strange Stories, dated February 1939. Bloch also adapted his story in this issue for an episode of Stay Tuned for Terror.} 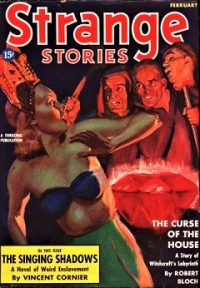