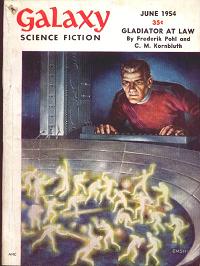 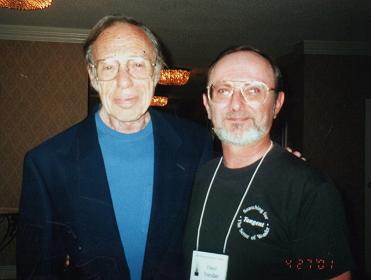 X Minus One aired Robert Sheckley’s “Something for Nothing” on April 10, 1957. It originally ran in the June 1954 issue of Galaxy. This is probably the fourth or fifth Sheckley (1928-2005) X Minus One radio dramatization we’ve showcased, and there are more to come, making his stories some of the most often adapted on classic radio’s premier SF program, which ran from 1955-1958.

Where William Tenn’s classic “Child’s Play” featured a child’s toy kit from the future being misdelivered to the present, Sheckley’s tale involves a “wishing machine” called a Utilizer being sent from the future to the present, but with the theme 180 degrees in opposition to that of  “Child’s Play.” With his trademark cleverness and wit, Sheckley shows us a man who is given a tool to grant his every wish–a house, then a palace, then a change of scenery…and even immortality. With wry social commentary at the heart of this story–as was the case with much of his best (and trademark) fiction–Sheckley once again reminds us that there really and truly is no free lunch in life–as one man discovers in one of the sharpest (and most fitting) shock endings I’ve come across in quite awhile. How would you react if you were given free housing, free health care, and anything you could possibly desire by some external agent, and then…but you’ll have to listen to Sheckley’s wonderfully conceived and pointed “Something for Nothing” yourself. The last thing I want to do is give the ending away–for free.

(Photo above right: Robert Sheckley and yours truly, April 21, 2001, during the Los Angeles Nebula Awards weekend. Sheckley was named SFWA Author Emeritus that year. It was an honor to have met him, as he passed away a few short years later on December 9, 2005.)