The New Adventures of Sherlock Holmes (1939-47) aired “The Strange Case of the Iron Box” on New Year’s Eve, December 31, 1945. During this incarnation of Sherlock Holmes on radio (the first coming in the early 1930s and the last running to 1959), Basil Rathbone and Nigel Bruce reprised their Universal studio film roles of Sherlock Holmes and Dr. Watson for close to 220 episodes. Afraid of being typecast–and following the cancellation of further Holmes films–Rathbone wanted out of his radio role. Though the show’s sponsor at the time, Petri Wines, offered him a generous bump in compensation if he would continue, Rathbone declined. Following his final episode as Holmes at the end of May 1946, the Holmes character was played by popular British actor Tom Conway (who was superb), with Bruce staying on until the series end in 1947. For several years during this series (including this episode), scripts were written by the team of future F&SF co-founder Anthony Boucher (1911-1968), and Denis Green. Boucher, a diehard Holmes fan, would pen the outlines of scripts and Green would supply the details. They worked well together and the show flourished. This episode is special in that it is prefaced by Anthony Boucher’s wife, Phyllis (1915-2000), who runs through a typical production day from first script readings and changes, to two live productions, one for the East Coast audience, a lunch break, and then the late production for the West Coast audience. A rare treat.

“The Iron Box” employs an oft-used setting in old time radio, one which revolves around people (usually relatives) gathered in an old mansion as the patriarch of the family is near death, and the possible inheritors of the will are gathered to learn what bounty, if any, has been bequeathed to them. As in many a science fiction tale reworking a standard theme where the author tries to find some angle not yet explored, so too in this mystery setting. Worked to death and in so many variations over the years, what could scripters Boucher and Green bring to this Sherlock Holmes tale? Suffice it to say and without giving any spoilers, it involves the fact that the titular iron box supposedly holds some sort of great wealth, but there’s a catch to when it can be opened and the contents discovered. The catch is the new angle brought to a standard trope, and a rather interesting one it is. But as can be expected with a Holmes tale, there is more afoot than meets the eye so be prepared to learn not only the contents of the iron box, but a behind-the-scenes deception that makes “The Iron Box” even more intriguing. Happy New Year.

{With sleuthing and Sherlock Holmes fresh in mind the neighborhood gang made one final journey to the corner newsstand in 1945. Crack Detective (1938-57) was a bi-monthly in 1945. New Detective (1941-53) also promised dangerous thrills, and was a bi-monthly in 1953. In mid-1953 it would undergo the first of several name changes that would lead it to surviving into 1971–though by the late 1950s the focus would begin to alter dramatically, eventually resulting in more of a men’s magazine with an emphasis on adventure stories laced heavily with sex, a feature the covers portrayed with many a scantily clad woman (or group of them) featured prominently and in (almost) all of their natural glory. Popular Detective (1934-53) began as a monthly but scaled back in 1938 to a bi-monthly, a schedule it faithfully maintained through 1945 and until its demise.} 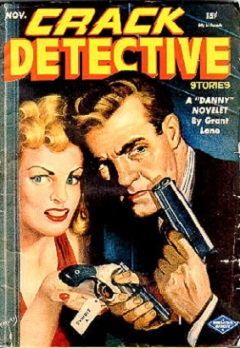 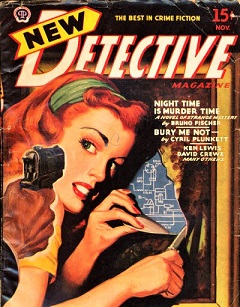 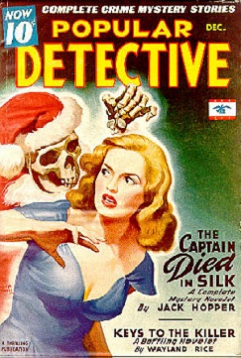