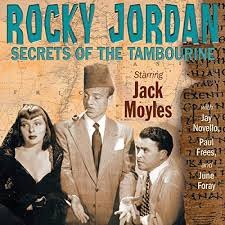 Rocky Jordan (1948-1950) aired “Red Stands for Blood” on February 13, 1949. This is the tenth Rocky Jordan episode we have showcased since 2011 and the first since July of 2019. Borrowed from a previous introduction for the benefit of new listeners unfamiliar with the Rocky Jordan program, here are the basics of the show’s background. Rocky Jordan ran from October 21, 1948 through September 5, 1950 and starred Jack Moyles as Rocky Jordan. There were several iterations of the show, the first of which aired in 1945 under the title A Man Named Jordan. Only two episodes of this early precursor are known to still exist. This version was set in Istanbul, Turkey but was otherwise the same as its successor. An attempt to revive the series with famed Hollywood actor George Raft aired for one season from 1950-51. A couple of half-hearted attempts were made at further revivals in 1955 and ’57, but none of these fifteen-minute episodes survives. 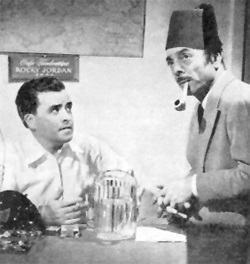 Rocky Jordan was modeled on the classic, much revered movie Casablanca, which premiered in New York on November 26, 1942 and then in general release on January 23, 1943. Casablanca starred Humphrey Bogart as Rick Blaine, the American exile who ran Rick’s Cafe Americain in Casablanca, Morocco, an unallied country during world War II located in northwest Africa and bordering the Mediterranean Sea. Rocky Jordan is set in Cairo, Egypt, in northeast Africa, said country also bordering the Mediterranean. Rocky calls St. Louis home (but was chased abroad by his enemies), whereas Rick hailed from New York; both are intimated to have shady pasts. The counterpart to Rick’s Cafe Americain is Rocky Jordan’s Cafe Tambourine, not far from the “mosque Sultan Hassan,” (photo top right) where Rocky finds himself routinely involved with “crime, mystery, and beautiful women.” Much like Rick’s Cafe Americain which is set during WW II, Jordan’s Cafe Tambourine, while set a few short years following the war, is a magnet for all ethnicities and types, from the respectable to the rogue. 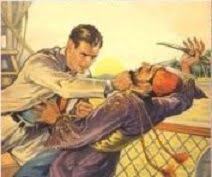 “Red Stands for Blood” begins innocently enough, with a call inquiring if the Tambourine would be available to rent for an evening. When asking the caller for the details Rocky is asked to meet the caller at a certain address to talk it over. His radar up, Rocky nevertheless makes the trek through Cairo’s narrow, winding streets to the caller’s address in a run down part of the city, where he learns that indeed the query about renting his cafe for an evening has been a ruse. Turning down the offer to bodyguard something precious and potentially dangerous, Rocky leaves the man’s room only to hear shots and turn to see the man he had just spoken with fall to the floor dead. But he also gets a glimpse of the murderer, which only deepens the mystery after Rocky calls in Sam and Greco, who inform him that the description of the murderer is that of a man dead for two years. Things get sticky when the expected beautiful woman appears that night and threatens Rocky’s life with a dangerous looking pistol pointed in his direction, and there’s that dead murderer skulking about after Rocky as well, trying to threaten him off as witness to the murder he committed, or else. So listen now to learn what everyone is after, why they believe Rocky has it, and what lengths they will go to in order to relieve Rocky of it–including murder. Espionage, international intrigue, a beautiful woman, and murder. How does Rocky somehow find himself in the middle of all these nasty messes? These questions are exactly what Sam Sabaaya asks Rocky when he finds him at the eye of another murder where “Red Stands for Blood.”

{Though the freezing walk to the corner newsstand in February of 1949 was a bone-chilling one, the neighborhood gang was well rewarded with their selected pulp magazines that month. Astounding SF (1930-present, now Analog) offered a most intriguing cover arrangement along with the cautionary message that maybe humanity wasn’t ready for the stars. Along with the cover story by “Will Stewart” (a pseudonym for Jack Williamson), there were stories by Eric Frank Russell, Henry Kuttner & C. L. Moore, John Christopher, and a couple of others less well known. Astounding held to its solid monthly schedule in 1949. Startling Stories (1939-55) was on its game with the issue below, for it featured what would become a minor classic in Henry Kuttner’s short novel “The Time Axis,” which was illustrated by the incomparable Virgil Finlay. Among others there were also stories by John D. MacDonald, Murray Leinster, and L. Ron Hubbard. What an issue! Startling Stories was a bi-monthly in 1949. Thrilling Wonder Stories (1936-55) produced a classic issue with its February 1949 offering, for it ran what would become one of, if not the most famous of A. E, Van Vogt’s shorter works, his novella “The Weapon Shops if Isher.” This famous collector’s issue also held stories by Noel Loomis, Ray Bradbury, James Blish & Damon Knight, Sam Merwin Jr., Margaret St. Clair, Murray Leinster,  and last but not least, Theodore Sturgeon. I can’t imagine what this issue would be worth to serious collectors today. TWS was a bi-monthly in 1949.] 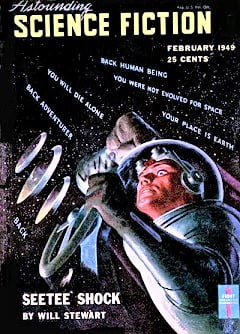 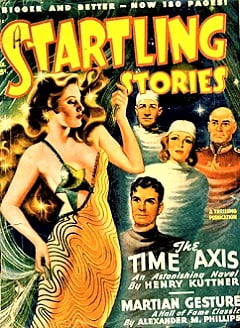 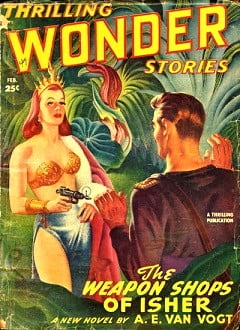