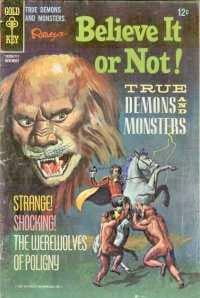 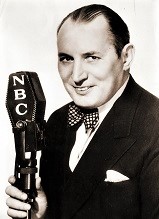 Ripley’s Believe It or Not (1930-1948) aired “Lightning Brings Girl to Life” on October 28, 1947. One would think that after 18 years of weekly, and at times bi-weekly, broadcasts that more than a miniscule few would have survived, but alas, unless others have been discovered in recent times, only a scant 25 remain, some of the 15 minute variety and others at a full-blown 30 minute length. More’s the pity, for tens of millions of fans over nearly 100 years have been fascinated by the oddities Leroy Robert Riley (December 25, 1890-May 27, 1949) brought into their homes, via the original newspaper comic strip (Ripley was foremost a cartoonist), short films, many a book collecting his curiosities, or later the television shows.

This is but the second episode of this program we have showcased, the only other from almost a year ago, on August 11, 2018. We therefore repeat the fascinating introductory highlights of Robert Ripley’s life and the various incarnations of his life’s work that have made him famous to this day. And please note that his legacy continues, for on June 9, 2019 the Travel Channel debuted the first in a new hour-long series of Ripley’s Believe It or Not! shows hosted by none other than Bruce Campbell. The shows are scheduled for 9 PM Eastern on Sunday nights with repeats during the week at various times.

Ripley was a sports enthusiast and cartoonist in his early years. Indeed, he played semi-professional baseball and by all accounts was good at it. If not for an injury, he might have played for the New York Giants. When stuck for a column once, and at the last minute and on deadline, he quickly came up for a one-off filler he called “Champs and Chumps.” It proved so popular that he was asked to do more of this oddball sort of feature. It evolved rapidly into “Ripley’s Believe It or Not!,” and we know the rest of the story. William Randolph Hearst paid Ripley $100,000 in 1929 to write for his King Features syndicated newspapers, which at that time was a fortune (and not bad by today’s standards either), and no less than Warner Bros. paid him a gargantuan $350,000 at about the same time for a series of short film features. This allowed Ripley to indulge his “hobby” as an amateur anthropologist and travel the world, collecting, drawing, filming, photographing, and writing about all of the things he would bring home to America–the entrepeneur in him brought to full flower. One could write volumes about the jovial Robert Ripley and spend weeks if not months poring over his photos and written exploits from all over the globe, but a few highlights will have to suffice us for now.

Sold his first cartoon to Life magazine in 1908.

December 1922 he takes his first trip around the world, cataloging everything in his journal.

In 1926 he becomes the New York handball champion.

July 1929 sees his first installment of Ripley’s Believe It or Not! in William Randolph Hearst’s newpapers nationwide. The feature would eventually end up in over 300 newspapers in 33 countries.

1933 sees the first of what would be many museums devoted to objects Ripley has accumulated from his world travels. They were named “Odditoriums” and they spread like wildfire in many cities across the country, eventually being erected in a number other countries as well, such was their worldwide appeal. The first such Odditorium premiered at the 1933 World’s Fair in Chicago (photo below). 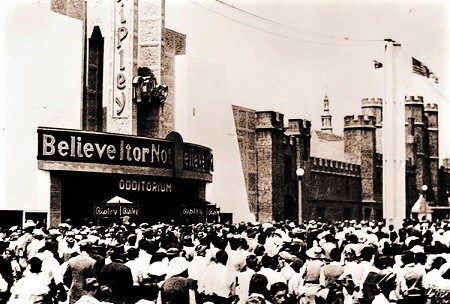 In 1934 Ripley does the first radio show simulcast around the world and uses numerous translators for different countries receiving the broadcast.

1937: Peanuts creator Charles Schultz (age 15 as Ripley’s assistant) sees his first published drawing for Ripley’s Believe It or Not!.

In 1946 Ripley purchases a Chinese junk.

1947 saw Rip purchase his third home, this one in West Palm Beach, Florida.

1948 marks the final episode of the long-running radio show and a gala party is held in New York City. Ripley is now interested in television.

May 27, 1949 Ripley dies of a heart attack shortly after, and while on the set of, the 13th telecast of his new TV show. 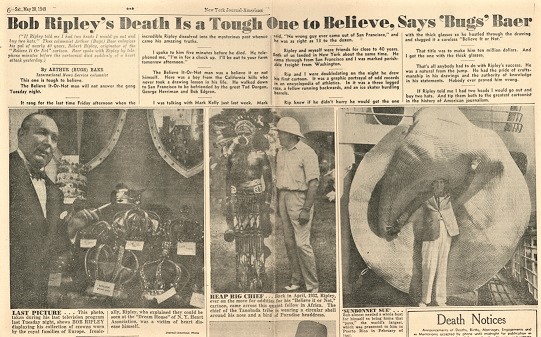 {Below: A scary example from Ripley’s travels — The world’s largest anaconda (hopefully not hungry).} 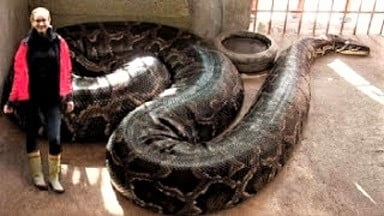 This episode, “Lightning Brings Girl to Life,” is of the 15-minute variety and relates several stories concerning reports from listeners about the strange effects of lightning on people or objects, and begins then the longer title tale, an emotionally heart-wrenching story of a young girl who, declared dead with a damaged skull from a fall, was miraculously brought back to life by a lightning strike while in her coffin and moments before being lowered into the ground forever. Unbelievable, you say, electricity bringing someone back from the dead? Well, remember the original 1931 b&w classic horror film Frankenstein, if you doubt the power of lightning!

As all good Dimension X and X Minus One radio fans know, Ernest Kinoy (1925-2014) and George Lefferts (June 18, 1921-    , photo below from 2011) adapted previously published SF stories for these programs and wrote a few of the original tales themselves. What fans of these two SF series may not know is that George Lefferts also wrote Ripley’s Believe It or Not! episodes, including the one you are about to hear. Believe it, or not.