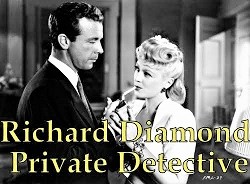 Richard Diamond, Private Detective (1949-52) aired “The Blind Man and the Cop Killer” (aka “Cop Killer”) on February 26, 1950 as its 43rd episode of some 141 original episodes. This is only the fourth Richard Diamond episode we’ve presented, the first being from early November of 2019, and the second and third from June and July of 2020. Due to the popularity of the trio of earlier shows I thought it might be a good idea to treat Diamond fans with another, especially since it’s been close to a year since the last one. Therefore–-for newcomers to the show and those wishing to refresh their memories–-I reprise in slightly abbreviated form our earlier historical sketch of the program and its recurring characters.

The show originally aired over NBC stations, then ABC, and then finally in 1953 by CBS, but all of the CBS shows were repeats from the 1950-51 season, thus some old time radio sites list the show’s run as going into 1953. Richard Diamond (starring film icon Dick Powell, 1904-1963, photo above right) was an ex-cop turned private detective who maintained good relations with his ex-boss and police lieutenant Walter Levinson (played by

Ed Begley [1901-1970, photo at left], probably most recognizable as juror #10 in the classic 1957 film Twelve Angry Men, and father to actor Ed Begley, Jr.). Diamond’s girlfriend, Helen Asher, was played by Virginia Gregg (1916-1986, photo below with Powell), who went on to have many film and television roles (including the Twilight Zone episode “The Masks” which aired March 20, 1964). The character of Richard Diamond–-and the radio program itself–-was the brainchild of Blake Edwards (1922-2010), perhaps best known for writing and directing the Pink Panther movies, as well as directing other fine films such as Operation Petticoat (1959), Breakfast at Tiffany’s (1961), and Days of Wine and Roses (1962). Blake’s private detective Richard Diamond didn’t exactly fit the standard mold people were used to, as typified in the novels of Dashiell Hammett and Raymond Chandler. While he could wisecrack with the best of them, he was also suave and sophisticated and tough as nails, living the high life in New York City when not found visiting the swank penthouse apartment of his girlfriend, Helen Asher. Being a well-seasoned song and dance man due to his many early movies where he inevitably ended up singing, Dick Powell was the perfect choice to play Richard Diamond, especially after his smashing success in 1944’s Murder, My Sweet. Audiences loved Powell as Diamond, so much so that the show’s popularity warranted its own television counterpart. It starred David Janssen (1931-1980) and ran from 1957-1960. Janssen, of course, is best remembered for his iconic role as Dr. Richard Kimble in the classic TV series The Fugitive (1963-67). 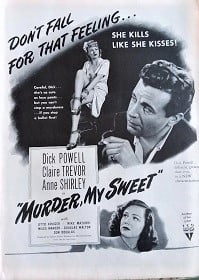 Dick Powell’s breakout film (briefly mentioned above) was 1944’s noir classic Murder, My Sweet. Based on Raymond Chandler’s detective character Philip Marlowe from his 1940 novel Farewell, My Lovely, the film was released with the book’s title but audience reaction was tepid at best, the feeling being that the title wasn’t dark enough and audiences assumed it was just another of Powell’s many light romances he had been making since the 1930s (30+ such roles from 1932-1939), in which he played handsome young men who wooed women with his boyish good looks, musical ability, and crooning voice. Getting older, and desirous of more mature roles that fit his middle aged demeanor, he convinced the powers that be to give him the role of Marlowe from Chandler’s novel. It was quite a gamble but Powell pulled it off admirably and the film is now recognized as a noir classic. When the film was released in late December of 1944 with the novel’s title and proved unsuccessful at the box office, it was quickly retitled Murder, My Sweet and re-released in February of 1945 in St. Louis with much better results. The box office and critical acclaim following the film led to several other noir films of note with Powell in the lead: Johnny O’Clock (1947, in which he played a detective), To the Ends of the Earth (1948, crime noir), and Pitfall (also 1948, film noir where he starred as a bored insurance agent who falls in love with the wrong woman).

“The Blind Man and the Cop Killer,” as one might surmise, has Diamond in determined pursuit of the sort of killer regarded as the lowest of the low, the kind despised as a “Cop Killer.” 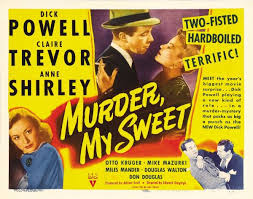 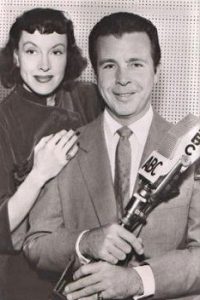 {“Cop Killer” aired on a Sunday night in 1950, which meant the next day after school the neighborhood gang would head directly for the corner newsstand to spend the change burning holes in their pockets. Astounding SF (1930-present, now Analog) was an automatic purchase, even though most of the gang was in the mood for detective magazines given the Richard Diamond episode they had immersed themselves in the night before. Astounding SF held to its never-miss-a-beat monthly schedule in 1950. Famous Fantastic Mysteries (1939-55) was always welcome whenever an issue appeared. It specialized in reprints of classic or very early fantasy stories, many of which appeared in various non-genre pulp magazines before there were official science fiction or fantasy magazines. Stories like those by H. Rider Haggard, featured on the cover below, were great reading and perfect reasons to add these treasured classics to one’s collection. While a bi-monthly, it managed but 5 issues in 1950. 15 Mystery Stories (1932-50) began as Dime Mystery Book Magazine, but switched its name and focus after only 10 issues. With its October 1933 issue it became Dime Mystery Magazine and turned its focus to that of a “weird menace” magazine. This proved a profitable decision, for the magazine ran under its new title for close to 17 years, until its first 1950 issue, at which time it would again be renamed, this time as 15 Mystery Stories. Alas, this change didn’t help sales and only 4 more issues would see publication, the magazine folding with its October 1950 issue. As with Famous Fantastic Mysteries, while a bi-monthly it managed but 5 issues in 1950.] 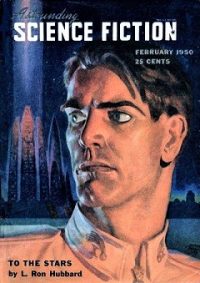 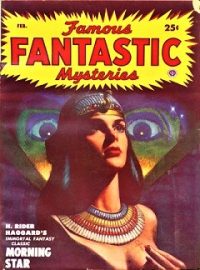 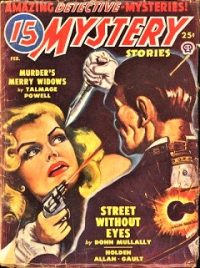