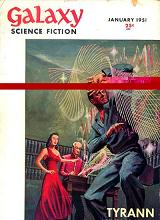 From last month’s series of ghosts, vampires, zombies, and the supernatural, we return now to the stark reality of space and the exploration of the Moon. Frank M. Robinson’s “The Reluctant Heroes” appeared in the January 1951 issue of Galaxy Science Fiction. X Minus One dramatized it for radio on December 19, 1956. It deals with the psychological effects of a prolonged stay on the moon, and the personal sacrifice only a certain breed of astronaut can be expected to endure (or not). Added to the personal human drama is the larger issue concerning the lengths to which a government might go to insure a moon colony’s stability and survival. It’s not a pretty picture, and “The Reluctant Heroes” also deftly portrays the sacrifice of conscience one man makes for the perceived overall good of the colony, revealing that there is more than one reluctant hero in this well-executed tale.