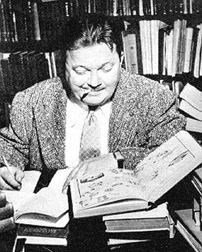 Quiet Please (1947-49) aired “Rain on New Year’s Eve” on December 29, 1947 as its 30th episode. Episodes were written and directed by Wyllis Cooper (1899-1955), who was also responsible for one of early radio’s most acclaimed horror shows Lights Out (1934-47). After the first year or two, and having established Lights Out as a winner, Cooper left radio for Hollywood and turned the show over to radio wunderkind Arch Oboler. While in Hollywood, Cooper is most noted for the screenplay of Son of Frankenstein (1939), the third in the Frankenstein series (behind Frankenstein {1931} and Bride of Frankenstein {1935}) and the last to feature Boris Karloff as the monster. While not the best of the Frankenstein movies, it did feature Basil Rathbone as Baron Frankenstein (grandson of the original Dr. Frankenstein), and introduced Ygor (played by Bela Lugosi) as the deformed blacksmith who had survived a hanging for the crime of graverobbing, and as a result now shuffles along as a hunchback.

Cooper’s format for Quiet Please was quite different than the idea behind Lights Out. While the latter was more splashy and gory and came to be known (and loved) for its grisly sound effects, Quiet Please went in the opposite direction. Cooper relied on his scripts to tell the story and many OTR historians now praise the solid writing, even though production values were quite minimal. Often there were only three characters, with narrator Ernest Chappell (1903-1983, photo at left) having a part while at the same time narrating story details directly to the audience. There was also no music score to speak of, only the ubiquitous organ riffs so prevalent in early radio. Script and story were everything.

This brings us to “Rain on New Year’s Eve,” and a perfect horror tale in stark emotional contrast to the gay festivities surrounding this annual celebration. A hardworking writer is having problems finishing his poor man’s Frankenstein script before deadline (which is midnight on New Year’s Eve). Working for his insufferable B-movie director who is never satisfied (remember that Cooper worked in Hollywood as a writer), the writer and director differ on how many monsters the film is to have. Our writer insists on one main monster while the director now calls for a rewrite with no less than three monsters. One thing leads to another in their back and forth, but in the end it is decided that this monster only manifests and kills in the final hour of each year, so the script’s real horror is compressed–for dramatic effect–to a single hour. Sounds like a dandy twist to an old theme, right? A monster appearing once a year for but an hour in which to wreak its death and destruction–or to be thwarted by the hero. I won’t spoil the reveal by giving away the ending, but remember that the director has given the hapless writer till midnight on the 31st to complete the screenplay, for money would be lost if shooting were to be delayed by even a day. Cooper also includes an inside joke as mention is made of Son of Frankenstein. (A brief note: The sound quality is not the best in this episode–nor is it on several other Quiet Please episodes, unless expensively digitized and remastered–but the occasional brief periods of scratching or background fuzz do not critically impair the overall listenability.)

“Rain on New Year’s Eve” is the perfect, low-key little horror tale for those not going to wild parties or gatherings on New Year’s Eve, or for baby-sitters watching over small children while parents are out partying till the cows come home. One bit of advice though, and I urge those at home curled up on the couch or in a comfortable over-stuffed chair to take it–do not listen to this radio drama between 11 PM and midnight, for as certain as it is that the sun will come up in the morning, there will be murders during this final hour of the year. And who knows for sure who will commit them? So lock your doors and windows, and don’t be afraid if, between 11 PM and midnight, strange noises are heard in the house. It’s probably just the house settling, or a tree limb scraping a window in the night breeze. Or perhaps just the “Rain on New Year’s Eve.”

{The neighborhood gang, to a boy (they’d met only one girl at the corner newsstand buying an SF pulp and that was some time ago), wondered if they would be left at home with the high school-aged babysitter they disliked (they were old enough to stay home alone!) on New Year’s Eve, or if mom and dad would stay home. Either way, they were taking no chances after listening to this Quiet Please episode and would buy magazines to immerse themselves in on New Year’s Eve, magazines filled with tales of heroic adventure, stories to allow them to forget radio dramas of darkness and monsters. Lucky for them, it was a fine month for the pulps and among their choices were Astounding (featuring “Aesop,” a future classic and one of Cliff Simak’s City stories), Thrilling Wonder Stories with a cover story by none other than Henry Kuttner, and who could turn down Planet Stories with a cover like that?} 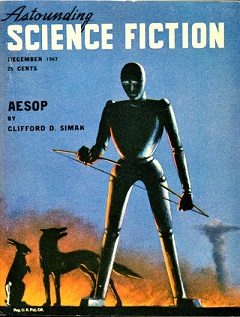 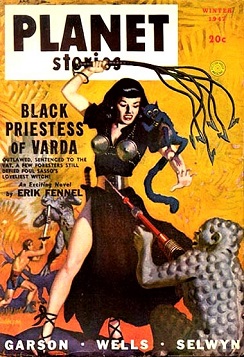 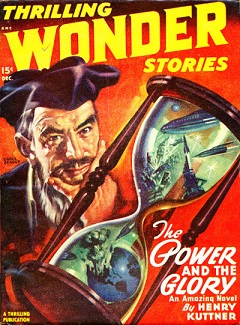