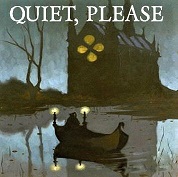 Quiet, Please aired “Adam and the Darkest Day” on November 7, 1948 as its 73rd episode. The show ran for two years (1947-1949) and was, according to some accounts, the best overall horror/science fiction radio series. It was written by Wyllis Cooper (1899-1955, photo at right), the man who created another of old time radio’s greatest horror/drama shows, Lights Out (1934-1947), and who also wrote the (more or less mediocre) screenplay for the film Son of Frankenstein (1939). It is estimated that there were 106 scripts or broadcasts and between 89-99 episodes in circulation. Unfortunately, many of them exhibit poor audio quality, having been reproduced from old 78 rpm records.

To be honest, I’ve had doubts as to whether to run this episode at all, but decided to do so for several reasons. While the audio quality is good (one of the few that are), and while just about everything about it is poor, it provides valuable contrast in which to judge quality old time radio dramatizations–whether from adapted stories or original scripts–for this show or any other OTR program. Wyllis Cooper and Quiet, Please produced far better shows, securing a solid reputation among historians and fans down through the years. The takeaway from this show is that it echoes many of the concerns about our wise (or not) use of atomic weapons prevalent in the years following the first atomic bomb dropped on Hiroshima a scant three years earlier. Aside from that, the writing is poor, the main character is dumb (due to the script), and the science is ignorant and laughable even for 1948. And I don’t even want to hint at the ending. Suffice it to say that the storyline is about the aftermath of a nuclear apocalypse. The place is Chicago, on the shores of Lake Michigan. We are given a survivor who, on one hand, leads us to believe from what he says that it is a long time after the event (“Steel? We used to have steel,” or something to that effect), but then we see him crawling out of his hiding place for the first time and him wondering if anyone else is alive–as if the atomic bomb that hit Chicago was a recent event. He then finds two other survivors (one a learned scientist, the other a woman named Emily–and since his name is Adam we have a lame Adam and Eve/Emily tie-in), and they soon find that Earth has been knocked out of its orbit and is receding from the sun. Earth, these three, and all of the mutated fish in Lake Michigan are now headed for the icy darkness on the outskirts of the solar system, where they will certainly perish. But then we learn there is a modicum of hope after all because of another example of poorly reasoned science that may save them, changing their course and directing them back toward the life-giving warmth of the sun. It stretches credulity to the breaking point. And then we are presented with another twist out of left field to end the tale, and this I will not offer. I want you to experience it for yourself, as I wish to share my suffering equally among you, evil soul that I am.

In the broadest general outline “Adam and the Darkest Day” recalls the superb Fritz Leiber’s “Pail of Air,” which we showcased as our second OTR episode way back in June of 2009. “Pail of Air” first saw print in the December 1951 issue of Galaxy, and aired on X Minus One in February of 1956. Both feature Earth ripped from its orbit into the cold depths of space with a few survivors to tell the tale, but apart from this one would be hard pressed to find two more divergent stories resulting from the same basic catastrophe. For those wishing to compare and contrast these two episodes, you can find “Pail of Air” here. Wyllis Cooper’s story aired three years before Leiber’s saw print. Maybe Leiber listened to Cooper’s tale and decided to write his own, but with a much more mature approach? We’ll never know for sure, but it is fun to speculate, and in this case to compare and contrast.

{After listening to this depressing Quiet Please episode a change of mood was in order, so the neighborhood gang made fast for the corner newsstand to raise their spirits with tales of adventure and the future. Astounding SF (1930-present, now Analog) was monthly in 1948 and a must have. This issue showcased Part 2 of 4 of A. E. van Vogt’s now classic The Players of Null-A. Fantastic Novels (1940-41 & 1948-51) featured reprints of classic early novels, both SF and Fantasy, and reprinted many of A. Merritt’s classic fantasies along with work by Murray Leinster, C. L. Moore & Henry Kuttner, Ray Cummings, and others. Counting both runs of the magazine it published but 25 issues, 20 in the 1948-51 run, which at that time was a bi-monthly. Planet Stories (1939-55) was always good for colorful adventure escape stories, ripe for malleable imaginations and was a quarterly in 1948.} 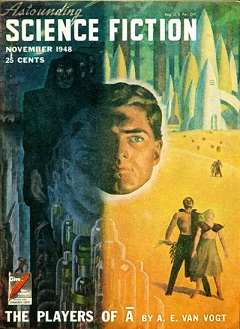 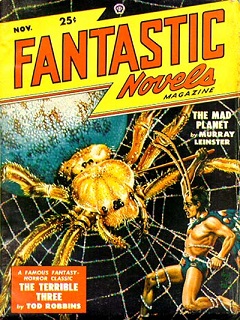 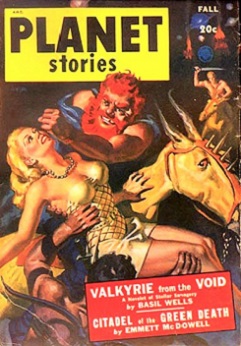