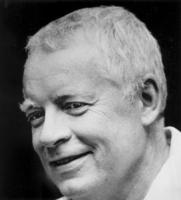 Algis Budrys’ (1931-2008) “Protective Mimicry” saw print in the February, 1953 issue of Galaxy Magazine, and was dramatized for radio by X Minus One on October 3, 1956. Full of wit, wry humor, and wise-cracking, hard-boiled detective patois (Mickey Spillane is even briefly referenced in a one-off bit of dialogue), it tells the tale of a United Galactic Federation Treasury Agent who must track down counterfeiters. The trail leads him to the sweltering, forest-swamp world of Deneb XI where the counterfeiter is definitely not of the usual garden variety. Note that Budrys was ahead of his time when his agent/detective must also resolve the mystery of how the wily counterfeiters got around forging the “electronic patterns” embedded in the fake fifty-credit notes.

A. J. Budrys was rightly regarded as one of science-fiction’s most highly respected critics, having a long-running book review column in The Magazine of Fantasy & Science Fiction, as well as in other magazines. Among his several novels, Who? (1958) and Rogue Moon (1960) are perhaps his most influential and highly regarded works, and, by many accounts, regarded as classics, though his later novels, Michaelmas (1977) and Hard Landing (1993) were well-received as well. He devoted the last several decades of his life to the highly influential Writers of the Future contest, providing inspiration and guidance to new writers, the contest giving birth to many of today’s recognized names.

While America was at peace following the recent Korean “conflict,” but with the Cold War with the Soviet Union and the Joseph P. McCarthy senate hearings focused on ferreting out Communists (or Communist sympathizers) inside the U.S. on its mind, SF readers took respite in the pages of their favorite SF magazines and pored over stories such as Damon Knight’s “Stranger Station” (The Magazine of Fantasy & Science Fiction, December), and Michael Shaara’s wise, insightful story about electoral politics, “2066: Election Day” (Astounding Science Fiction, December).

Galaxy Magazine sponsored X minus One and used the show’s national listening audience to good effect. At the end of this episode the host announces that the first 2,500 listeners to write their name and address on a postcard and send it to the magazine, would receive a free issue. How times have changed over the intervening 53 years.