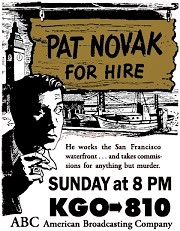 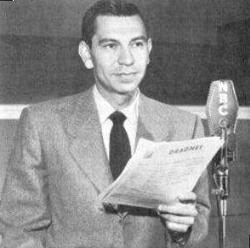 Pat Novak…for Hire (1946-49) aired “Fleet Lady” on March 6, 1949. The show ran from August 22, 1946 through January 4, 1948, at which point it took a hiatus and then resumed from February 13, 1949 to June 26, 1949. The number of total episodes varies slightly, but it is estimated that about 100-104 were produced, of which only about 25 have survived. It starred Jack Webb (1920-1982, photo at right) as Pat Novak, and for many episodes Raymond Burr (1917-1993, of Perry Mason and Ironside tv fame; photo lower left) as Inspector Helmann, and Tudor Owen (1898-1979, photo lower right) as “Jocko” Madigan, Novak’s mentor, now best friends with distilled spirits. The show was set on the San Francisco waterfront where Novak ran a boat shop on Pier 19, and from out of which he would take cases on the side. The show broke new ground in what had become the era of film (and radio) noir, that type of novel (and subsequent Hollywood film) pioneered by Raymond Chandler, Dashiell Hammett and others, the school of what became known as that of the “hardboiled detective.” The type of tough PI or detective personified by the likes of Sam Spade, Philip Marlowe, Mike Hammer and others permeated the silver screen and gave rise to countless radio dramas, totally saturating the airwaves, and were noted for their characteristic “Chandleresque” dialogue. Jack Webb and the

two men with whom he worked most closely (Richard Breen and William P. Rousseau) had a different take on this type of story with Pat Novak…for Hire. What made their show different and wildly popular was that while telling their stories straight, they amped up and exaggerated the wise-cracking tough talk of Novak as well as the banter of the characters in each episode–to the point of humorous parody. In fact, some labeled this “new” noir dialog as Webb-esque. And it worked. Here are some examples from several shows with at least one showing up in this episode:

“She stood leaning there for a minute, the sort of a girl who moves when she stands still. She had blonde hair. She was kind of pretty, except you could see somebody had used her badly–like a dictionary in a stupid family.”

“She was in her 30s and pushing 40 hard enough to bruise it. But she looked good standing there in the doorway, long and lean enough to make a greyhound turn in his card. She was wearing green lounging pajamas, and you’ve seen bananas in looser skins.”

“When she said ‘good luck’, you knew she was just being polite and didn’t mean it anymore than the hangman when he tells you to watch your step.”

“Hellmann, you ought to rent an idiot. The heavy thinking’s too much for you.”

“Sooner or later you get burned, and it doesn’t make any difference whether you’re a man or a mouse. Because down in the waterfront, in San Francisco, they build the traps both ways… Down here, if you reach out to help a panhandler, the guy’ll take your arm and hand you back the dime… I rent boats and deal any place that’ll give a good trade-in on a second-hand soul.”

You get the idea. And each episode is littered with these philosophical kernels of street wisdom, or more often over-the-top (sometimes quite silly) similes, though some are priceless.

Jack Webb was a busy man in the 1940s and 50s as a producer and writer, above and beyond the several shows in which he starred. A few of his more notable shows–in the same hardboiled detective vein–were Jeff Regan, Investigator (1948-50), Pete Kelly’s Blues (July-September 1951, set in Kansas City and with a nod to Webb’s love of jazz), and of course Dragnet (1949-57). Note that each of these shows in one way or another and for a shorter or longer period of time, overlapped with another of Webb’s shows. Following his earlier efforts which took aim at the “Chandleresque” mode of dialog, with Dragnet Webb played it straight all the way down the line. His no nonsense, clipped dialogue and matter-of-fact presentation became iconic and translated into the tv version of the show quite well. Webb was so dedicated to law and order and the police ethic that to make Dragnet as accurate as possible he sought LA police advice and consulted with them regularly, studying their methods first hand, befriending many of them through the years of the tv show. When Webb died at the age of 62 in 1982, Los Angeles Police Chief Daryl Gates retired badge number 714, the number worn by Webb’s character Joe Friday on the tv show. Webb has two stars on Hollywood’s Walk of Fame, one for his TV work and one for Radio.

“Fleet Lady” has Novak involved in investigating a horse racing scheme gone bad. Of course there is murder, deception, and a beautiful woman involved along the way. How could it be otherwise? And be on your toes for the square peg in the round hole comparisons, for they hit you with almost every line. I think you’ll enjoy this typical example of Pat Novak…for Hire. 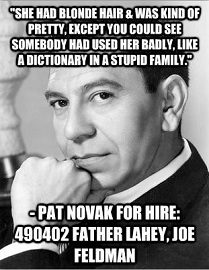 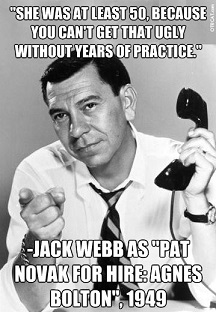 {Not even brisk, chilly March winds could keep the neighborhood faithful from gathering at the corner newsstand in 1949 to peruse the magazine racks for their favorite pulp magazines. As always, Astounding (1930-present, now Analog) was a sure bet with its engaging stories and solid monthly schedule. fantastic Adventures (1939-53) was mostly a monthly except during the war years, and with the September 1947 issue until its last in March of 1953 returned to a monthly schedule. Super-Detective (1934-1950) had an erratic schedule throughout its run of 80 issues, seeing anywhere from 2 to 9 issues in any given year. The issue below, March of 1949, would be the first of 9 featuring a Comics Section accompanying its stories, the 9th of which being the July 1950 issue. It folded with the next issue, cover dated October 1950, with no cover reference of any kind about a Comic Section.} 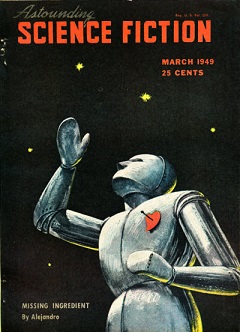 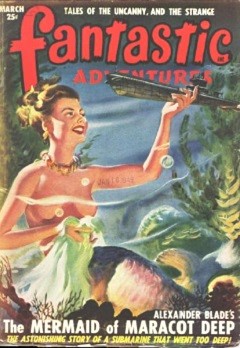 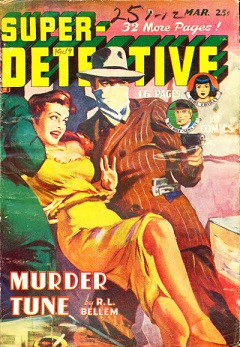