Nightbeat (1949-52) aired “The Devil’s Bible” on July 24, 1950. This noir “detective” show featured film–and later TV–star Frank Lovejoy as Randy Stone, the nightbeat reporter for the fictional Chicago Star newspaper. This episode revolves around a seminal occult work known variously as The Devil’s Bible, The Black Gospel, and the Codex Gigas–and really exists (see photos). Cursory research reveals that the dark tome–running to some 310 pages and weighing 165 lbs.–is made from approximately 600 donkey skins. Published in 1513 and condemned by the Church, its spells, incantations, and Prayers to Satan are sandwiched between actual books of the Bible.

Our story here begins with the murder of the rare book’s owner, the book’s disappearance, and how our nightbeat reporter/detective Randy Stone runs across its blood-stained resting place in a pawn shop, where the somewhat shady owner mistakes him for the person coming to claim it–for the price of $50,000! What has Stone stumbled into, how does the appearance of a strange man claiming to be Dante Alighieri figure into this deadly mystery, and how many will die attempting to acquire this legendary book of evil? The only way to find the answers is to listen to Randy Stone’s first person account of the story of “The Devil’s Bible.”

[Note that the script writer of “The Devil’s Bible” seems to have taken some “artistic” liberties in regards to the actual appearance of the book, as can be discerned when compared to these actual photos.] 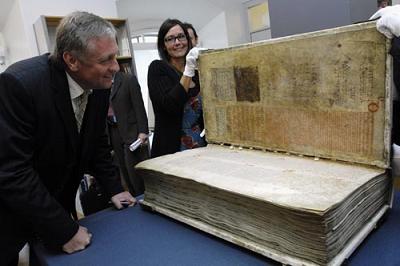