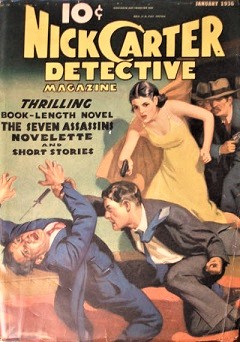 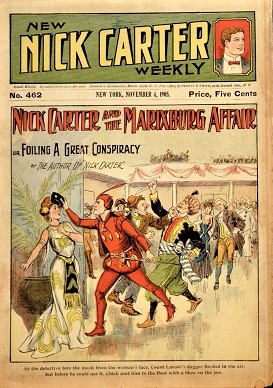 Nick Carter, Master Detective aired “The Devil’s Left Eye” on January 4, 1948. This is only the 7th Nick Carter episode we’ve run since 2009, the last being this past June. Carter’s history is long, covers numerous media, and is one of the more fascinating we’ve come upon. To crib from one of our earlier entries for new listeners, Nick Carter on radio ran a respectable twelve years, from 1943-1955, but the famous detective’s history begins much earlier. During the post-Civil War era known as Reconstruction, a short story featuring Carter appeared in an obscure fiction paper (The New York Weekly) in 1886 (predating the first Sherlock Holmes story by two years). The publisher was none other than Street & Smith, a fledgling, struggling publishing firm which would later become the most dominant pulp magazine publisher in the world. Among its later titles would be Astounding Science Fiction (now Analog), the only magazine from Street & Smith to survive the pulp magazine crash of the 1950s. Nick Carter Magazine ran for 40 issues, from March 1933 to June 1936, the final six issues slightly retitled as Nick Carter Detective Magazine. While the magazine had folded, its long-running character still lived, for in 1939 Hollywood picked up the movie rights and produced three “B” Carter films starring noted actor Walter Pidgeon (who later would star in the classic 1956 SF film Forbidden Planet). A mere three years later, Nick Carter would rise from the dead yet again in his own radio series, Nick Carter, Master Detective. The show’s producer and often the writer, Sherman “Jock” MacGregor, would enlist some of the best writers in the business to script Carter’s episodes, including Robert Arthur and David Kogan of Mysterious Traveler fame, the creator of The Shadow, Walter Gibson, and none other than legendary SF author Alfred Bester (one of which Bester-written episodes, “Chemical Chickens,” we ran in March of 2014 here). Lon Clark played Nick Carter throughout its 12-year run, ably supported by first Helen Choate and then Charlotte Manson (who plays Patsy in this episode) as Nick’s intelligent, perky secretary Patsy Bowen. Other mainstay characters included Police Sergeant Matty Mathieson, young newspaper reporter Scubby Wilson, and scruffy old veteran of the crime game Waldo McGlynn. (Photo above right:  Charlotte Manson and Lon Clark, 1946.) 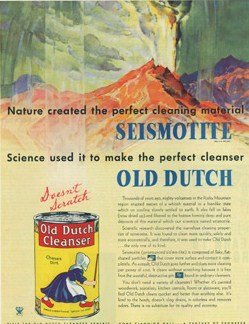 Virtually forgotten today, Nick Carter predates Dashiell Hammett’s Sam Spade, Raymond Chandler’s Philip Marlowe, and was originally inspired by the real-life exploits of private investigator Allan Pinkerton. In this episode, it’s a murder-puzzle worthy of Sherlock Holmes-level observation and deduction. We have a wealthy old gentleman (an antique gun collector who has also brought at great expense a whole room directly from an old Scottish castle and made it into his living quarters on the 23rd floor of a skyscraper) who has somehow been shot to death from an antique flintlock rifle while it rests firmly nestled in its display mount. Knowing the difficulties in arming and firing a three-stage weapon like a flintlock–with no one present to initiate the process, much less aim and pull the trigger–is but one of the mysteries to be solved in this ingeniously contrived murder mystery. So listen now to Nick Carter, Master Detective and “The Case of the Devil’s Left Eye.”

And though this episode is as much SF as any Sherlock Holmes adventure (i.e. not much), one of the show’s sponsors has a product with a decidedly pulpish SF sounding name (which is chuckle-worthy to modern sensibilities). The sponsor is Old Dutch Cleanser and it touts its main ingredient as Seismotite. The ad pictured at right is from 1934 and this radio episode is from 1948, so it looks like Old Dutch Cleanser and Seismotite were enjoying a pretty good run. You just never know what you’ll run across while listening to Old Time Radio.

{Following this Nick Carter, Master Detective episode, the neighborhood junior detectives couldn’t wait to get to the corner newsstand so they could ravage the stacks of pulps to find more adventures involving Good Guys vanquishing the Bad Guys, playing armchair sleuths through the pages of their favorite magazines. Black Mask (1920-1951) was the king of the detective magazines and had been for decades, so was eagerly grabbed up. It was a bi-monthly in 1948. Startling Stories was also a bi-monthly in 1948, and though playing detective was all the thing at the moment, the allure of a Startling Stories cover (and with stories by Hannes Bok and Edmond Hamilton) it was impossible to resist. Detective Story Magazine (1915-1949) had the honor of being the first pulp magazine devoted exclusively to detective fiction. In fact, and quite coincidentally, its first issue, dated October 5, 1915, continued a Nck Carter serial left hanging after Nick Carter Weekly had just folded. It would run for 34 years and publish 1,057 issues, around half of its life–and in the early years was published as a weekly, an astonishing accomplishment.} 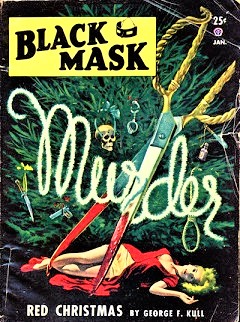