Nick Carter, Master Detective (1943-1955) aired “Murder in the Crypt” on August 2, 1943 as its 17th episode out of a total of 722. Though new episodes are discovered from time to time, only about 139 are known to be in circulation at this time. This is only the 10th Nick Carter episode we’ve run since 2009, the last being in February of this year. Carter’s history is long, covers numerous media, and is one of the more fascinating we’ve come upon. To crib from one of our earlier entries for new listeners, and slightly tweaked with new material, Nick Carter on radio ran a respectable twelve years, from 1943-1955, but the famous detective’s history begins much earlier. During the post-Civil War era known as Reconstruction, a short story featuring Carter appeared in an obscure fiction paper (The New York Weekly) in 1886 (predating the first Sherlock Holmes story by two years). The publisher was none other than Street & Smith, a fledgling, struggling publishing firm which would later become the most dominant pulp magazine publisher in the world. Among its later titles would be Astounding Science Fiction (now Analog), the only magazine from Street & Smith to survive the pulp magazine crash of the 1950s.

(Cover above left from the October 1934 issue of Nick Carter Detective Magazine. Photo above right, Walter B. Gibson [1897-1985], legendary writer for The Shadow magazine, also wrote scripts for several radio shows as well, including this episode of Nick Carter.) 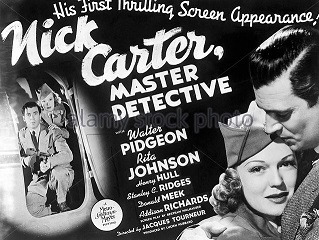 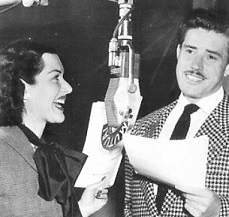 Nick Carter Magazine ran for 40 issues, from March 1933 to June 1936, the final six issues slightly retitled as Nick Carter Detective Magazine. While the magazine had folded, its long-running character still lived, for in 1939 Hollywood picked up the movie rights and produced three “B” Carter films starring noted actor Walter Pidgeon (who later would star in the classic 1956 SF film Forbidden Planet).* A mere three years later, Nick Carter would rise from the dead yet again in his own radio series, Nick Carter, Master Detective. The show’s producer and often the writer, Sherman “Jock” MacGregor, would enlist some of the best writers in the business to script Carter’s episodes, including Robert Arthur and David Kogan of Mysterious Traveler fame, the creator of The Shadow, Walter Gibson, and none other than legendary SF author Alfred Bester (one of which Bester-written episodes, “Chemical Chickens,” we ran in March of 2014 here). Lon Clark played Nick Carter throughout its 12-year run, ably supported by first Helen Choate  (photo at right with Lon Clark) until mid-1946 and then Charlotte Manson as Nick’s intelligent, perky secretary Patsy Bowen. Other mainstay characters included Police Sergeant Matty Mathieson, young newspaper reporter Scubby Wilson, and scruffy old veteran of the crime game Waldo McGlynn.

From Nick Carter’s beginnings in 1886 through his final radio show in 1955, Carter would change with the times; from clean-living detective (actually, at the beginning of his career, Nick was a private investigator and consulting detective to the police department, much like Sherlock Holmes, and did not work as a police detective), master of disguise, to anti-espionage agent, to the bane of mad scientists or the defender of scientists beset by crooks, Nick Carter has enjoyed one of the longest surviving, most popular runs in various media for over 100 years, for when his radio show ended in 1955 he would resurface (yet again!) in a series of James Bond-type paperback novels in the 1960s which ran into the 1990s, quite a few of them written by women. Virtually forgotten today, Nick Carter predates Dashiell Hammett’s Sam Spade, Raymond Chandler’s Philip Marlowe, and was originally inspired by the real-life exploits of private investigator Allan Pinkerton.

“Murder in the Crypt” centers on Anubis, ancient Egyptian Jackal-headed god, one of whose purported duties was as protector of the dead. When a museum guard is found murdered and others claim to have actually seen Anubis walking around the large crypt, Nick Carter gets involved. And of course there’s the dead king’s treasure that many seek, and which Anubis must guard as well. Can Anubis actually defy the centuries and be alive to defend the king’s tomb? Or is something more sinister (but believable) behind the accounts of his living presence? And will the fabulous treasure finally be found, or is it too a mere fabrication meant to enhance a myth? Only by listening to “Murder in the Crypt” will the answers become clear.

{Easily swayed by what they may have just heard on the radio and having already bought their supply of SF pulps for the month, the neighborhood gang gathered on the corner to make yet another trip to the local newsstand for more detective and/or police tales in the general vein of Nick Carter. Dime Detective (1931-53) filled the bill quite nicely, with mayhem and murder and at least one damsel in distress a normal occurrence. It was a monthly in 1943. Popular Detective (1934-53) would run much the same fare as Dime Detective and others in the same genre that proliferated at the time and held its own for almost as many years as Dime Detective before the pulp purge of the 1950s sucked it under the publishing waters along with many others. Note that E. Hoffmann Price (1898-1988), a familiar name to genre pulp lovers and a one-time collaborator with H. P. Lovecraft, is featured at the bottom of this issue’s cover. Popular Detective was a bi-monthly in 1943. Ten Detective Aces (1928-49) was just as hard-boiled as any of them, began publishing earlier and lasted nearly into the 1950s like its companions here. It was a monthly in 1943.} 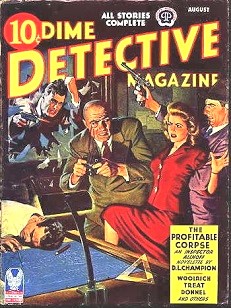 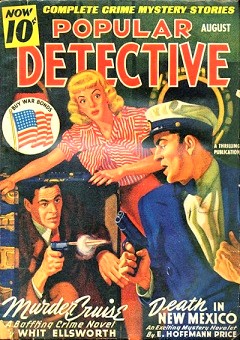 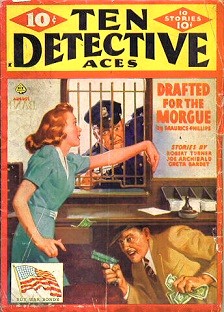