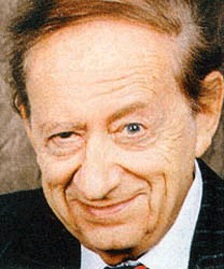 Mystery Playhouse aired Robert Bloch’s “Yours Truly, Jack the Ripper” on February 27, 1945. Bloch (1917-1994) saw his now famous short story originally published in the July 1943 issue of Weird Tales (cover at left). Much has been written about Bloch over the years, with most people aware of his written contributions to the horror genre, and of course the fact that Alfred Hitchcock adapted his novel Psycho for the silver screen in 1960. What is far less known is that Bloch wrote for radio in the 1940s, adapting 39 of his own stories for a radio series now lost. Airing from Chicago radio station WMAQ from May through August of 1945, the show was titled Weird Tales’ Stay Tuned for Terror. Following is an excerpt from the historical recap of the series by one of the most thorough and trusted Old Time Radio sites I am aware of, and use often while doing research. From The Digital Deli Too: 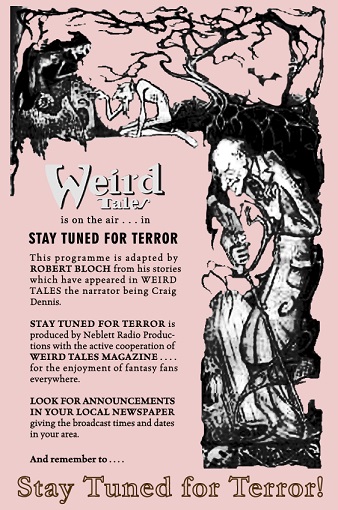 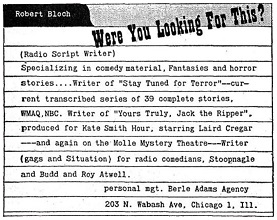 “Stay Tuned for Terror may very well be as mysterious as it’s author’s fiction. Often referenced, and cited for its famous author’s scripts, Stay Tuned for Terror remains one of those elusive programs from The Golden Age of Radio which has yet to surface in circulation. Golden Age Radio collectors can be fairly certain that its recordings survived either as transcriptions or privately recorded episodes. Robert Bloch’s early writing successes and wide popularity in the horror genre virtually guarantee that any number of his horror fiction fans would have at least recorded the run from Radio.
“Stay Tuned for Terror arose during one of the more prolific early periods of Robert Bloch’s writing career. Some friends and acting acquaintances had suggested that his short horror fiction pieces would likely be well received over Radio. Ultimately it was his friends Berle Adams, a theatrical and writer’s agent, Johnny Neblett, a sportscaster and actor, and James Doolittle, an actor, that sat down with Bloch over a period of a few weeks in the Fall of 1944 to attempt to put together the radio program.
“Bloch prepared 39 short stories with accompanying radioplay scripts, Johnny Neblett formed his first production company to produce it, and Bloch’s friend Howard Keegan–director of many of the Lights Out productions–signed on to direct the program. Neblett and Berle Adams persuaded Weird Tales magazine to provide a tie-in to the magazine and promoted the new program as Weird Tales’ Stay Tuned for Terror, so as to leverage Bloch’s considerable fame and popular success with that print publication.
“The program was recorded at the WMAQ Studios in Chicago over a period of 13 weeks, recording three episodes per day, one day each week. Bloch reportedly attended all of the recording sessions, commuting from nearby Milwaukee. Accounts vary over when the program first aired. We have contemporary provenances from WMAQ’s Summer 1945 run which account for all 39 scripts. We are not aware of any other proof of the program airing any earlier.”

It is speculated that if any of this “lost” radio series is ever recovered it might come from a Canadian source, as the series was picked up in Canada (ad above left). We hope someone comes across a set of the original transcriptions, or that perhaps one of Bloch’s many fans of the era might have made a personal copy of each episode. What a truly historic find that would be! Above right is a Billboard ad from Bloch’s agent from June 9, 1945, pimping Bloch’s talents, one of which was as a gag writer for radio comedians.

In the meantime, enjoy this adaptation of Robert Bloch’s imaginative interpretation of the infamous Jack the Ripper saga from Mystery Playhouse (1943-1952). None other than Peter Lorre sets the stage as host. Also note that the story itself is only around 23 minutes long. The remaining 6 minutes are given over to a preview of an upcoming The Saint episode, which can be skipped or listened to, as you wish.

{After listening to this scary episode of Mystery Playhouse in the cold February of 1945, the neighborhood gang couldn’t wait to meet at the corner drugstore the next day to warm their bones in front of the magazine shelves along the wall, where they would eagerly paw some of their favorite magazines, a few of which are shown below. At this time Astounding was still on its standard monthly schedule, Planet Stories was quarterly, and Weird Tales was bi-monthly. Of passing interest to longtime fans is that Leigh Brackett is featured on the Planet Stories cover, and Edmond Hamilton is featured on the Weird Tales cover. They would marry on the last day of 1946, December 31st, and would remain together for the rest of their lives. Ed passed away in February of 1977 and Leigh in March of 1978. Also worthy of note is the cover story for the February Astounding, written as by Lewis Padgett, the name being one of several pseudonyms used by the most famous husband and wife writing team in SF history, Henry Kuttner & C. L. Moore. Kuttner and Moore married in 1940 and would become good friends with Brackett and Hamilton. Kuttner would die of a heart attack in 1958, and Moore, ravaged by Alzheimer’s, died in 1987.} 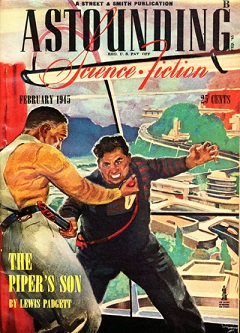 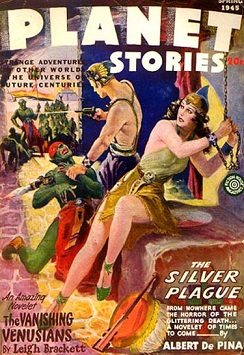 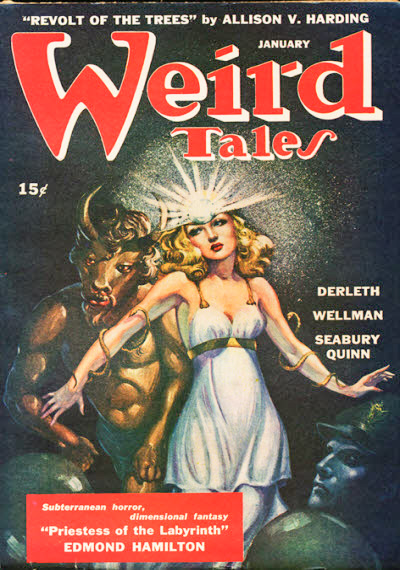