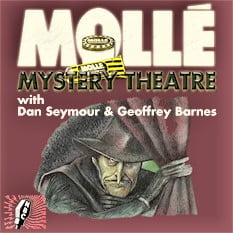 Mollé Mystery Theater (1943-48) aired “The Gioconda Smile” on June 19, 1945 as the 90th of its estimated 237 episodes from this five-year run, of which only 73 are known to be in circulation. It would exist under several name changes for another six years or so, and would switch from its original network, NBC, to CBS (1948-51), and then ABC. Its glory years as a first class mystery show are acknowledged as those comprising its original incarnation at NBC (i.e. 1943-48).

“The Gioconda Smile” was written by Aldous Huxley (1894-1963, author of Brave New World-1932) and was first published with four other stories in the collection Mortal Coils (1921). With Huxley writing the screenplay, it was made into the 1948 film A Woman’s Vengeance starring Charles Boyer, Ann Blyth, Jessica Tandy,and Sir Cedric Hardwicke.

“The Gioconda Smile” is a little bit satire, a little bit double murder, and tells of the situation a certain Mr. Hutton finds himself in when three women (one a younger woman, one his wife, and one an older woman) profess their love for him, and what a pickle he soon finds himself in. He can’t run, he can’t hide, so what’s a poor fellow in his situation supposed to do? I’m not sure I have the answer, but I do know that I don’t think I’ve ever run across the twist ending this story provides. 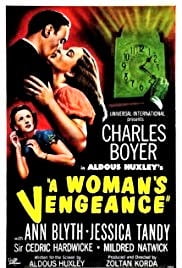 {The nearby newsstand was crowded the third Saturday in June of 1945 with the neighborhood gang enjoying the first weeks of their summer vacation. Astounding SF (1930-present, now Analog) always sold quickly and was one of several “must” picks for the gang. It was a monthly in 1945. fantastic Adventures (1939-53), whether its stories were light or dark in tone, always exhibited a free-wheeling imagination that was hard to resist. It was mostly a monthly but got hit hard during the war years and only produced five issues in 1945. Speed Mystery (1934-46) had undergone many name changes over its existence but finally settled on the current one until its death in 1946. It too produced only 5 issues in 1945.] 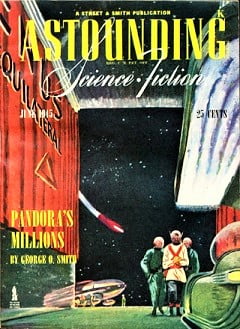 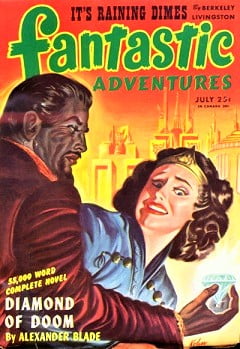 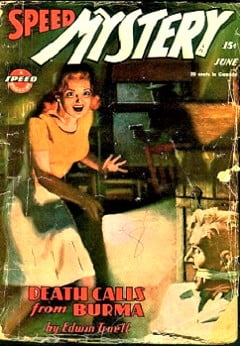