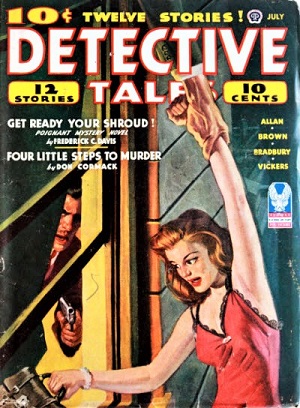 Mollé Mystery Theater (1943-48) aired “Killer, Come Back to Me!” on May 17, 1946 as one of its estimated 237 episodes, of which only 73 are known to be still in circulation. It would exist under several name changes for another six years or so, and would switch from its original network, NBC, to CBS, and then ABC. Its glory years as a first class mystery show are acknowledged as those comprising its original incarnation at NBC (i.e. 1943-48).

“Killer, Come Back to Me!” was written by Ray Bradbury (1920-2012) and first appeared in the July 1944 issue of Detective Tales (cover at left). This excellent radio adaptation features the incomparable film star Richard Widmark (1914-2008, photo at right*) in the leading role of a cheap hoodlum with delusions of grandeur who assumes the role of a dead gangster while taking up with the crook’s almost as delusional girlfriend, who is strong-willed and is as mixed up as they come. Thus, Bradbury gives us a made in heaven pair of psychological cripples whose fate is foretold, with the only mystery being how and when it will catch up to them. The acting is superb, the action non-stop, and the high energy musical score maintains the tension from start to finish, all combining to give proper due to Bradbury’s original story. It’s not everyday we get to hear one of Bradbury’s noir detective tales adapted for radio, and this marks a welcome addition to his science fiction and dark fantasy tales which have gotten all the attention over the years.

*This photo of Widmark is from the 1947 film noir classic Kiss of Death, in which he plays the utterly despicable and depraved gangster Tommy Udo, a performance that would define his early career. His performance is not only memorable for its depiction of a sociopath, but for the maniacal laughter that haunts the mind of anyone who has seen the film…and which one can note foreshadowings of in his desperate pleadings near the end of “Killer, Come Back to Me!”.

{Highly impressionable, after listening to “Killer, Come Back to Me!” the neighborhood gang couldn’t wait to head for the corner newsstand and read of more tales of gangsters and the Good Guys who fought them and their evil ways. Black Mask (1920-51) was a legendary must-buy, and though a bi-monthly for all intents and purposes, did manage to squeeze in a 7th issue in 1946. Detective Tales (1935-53) must have been doing something right to enjoy a lengthy run of almost 20 years, forced to finally fold during the pulp magazine crash of the early 1950s. In 1946 it was a monthly. Super-Detective (1940-50) had gone through several name changes before settling on this current one, and managed to hold its own for a decade before giving up the ghost. It was a bi-monthly in 1946. As with the dozens of detective, police, and mystery pulp magazines throughout the decades of the 1930s-50s, covers always seemed to feature the staple images of dames, danger, and guns, and the issues below were no different. The formula worked.} 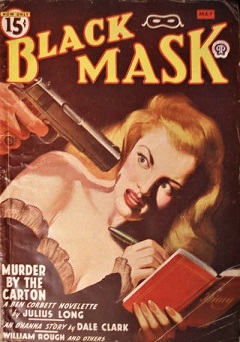 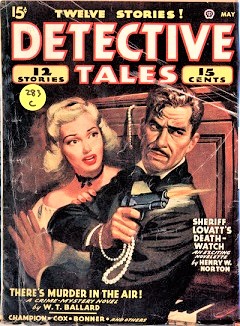 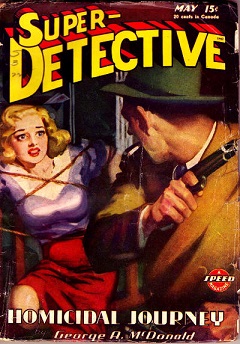