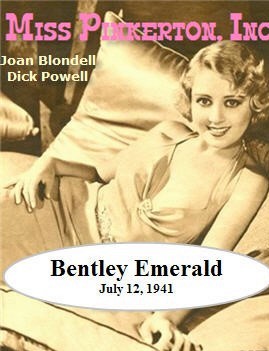 Miss Pinkerton, Inc. recorded “The Bentley Emerald” on July 21, 1941 as its audition/debut show. Accounts vary, including whether or not the show aired any further episodes or if any were even made. In any case, this is the only existing episode, which is kind of a shame because the chemistry and witty banter between the stars of the show (Joan Blondell and Dick Powell, photo at right) shows a lot of promise as a charming new detective show–and one of but a few with a woman as the lead character–in this case the owner of a detective agency.

The vast majority of these weekly Old Time Radio shows are squarely in the science fiction, fantasy, or horror genres. From time to time and to begin with I relaxed this self-imposed mandate to include straight mystery, adventure, or detective/P.I. shows because I favor these particular genres along with the SF/F/H genres. A crackling good adventure story on the high seas or some other exotic locale appeals to me, as does a good mystery, and especially the noir detective thriller, and I hoped others would appreciate them as well. I’ve also run a number of them because they were written by recognized SF authors who wrote for several old time radio shows, a prime example being Alfred Bester. Since this past December I have showcased five shows involving detectives or sleuths of various kinds:  Nick Carter, Master Detective, The Saint, Bulldog Drummond, The New Adventures of Sherlock Holmes, and most recently Candy Matson in early March.While looking at the numbers recently it became obvious that there was a noticeable hit spike whenever I ran one of these detective, investigator, or sleuth programs outside the SF genre.Whether from the novelty of listening to something different (i.e. outside the SF/F sphere), or because SF/F fans also like detective-type stories in general, or whether those frequenting this page each Saturday (and throughout the week) are simply OTR fans in general and not necessarily fans of any specific old time radio genre, the facts were in–these shows were popular.

The popularity of Candy Matson‘s debut episode (“The Donna Dunham Case”) led me to want to run another of her adventures, but it would have been too soon for another one even though the characters had grown substantially from the first episode and had become even more interesting. Fortunately, I ran across the episode for this week, which also features a female as the star–and two famous Hollywood actors in the lead roles. Joan Blondell (1906-Christmas day, December 25, 1979) stars as Mary Vance, a young college graduate going for her law degree, who has just inherited a detective agency from her deceased uncle. She knows nothing about the agency or detective work, and though the detective agency has built up a respected name for itself she plans to sell it. Through coincidence, and while on a train, she makes the aquaintance of one Dennis Murray, a Sergeant on the police force. Murray is played by renowned film actor Dick Powell (1904-1963). Their initial meeting does not go well, as witty insults are traded to good effect. It seems Murray is not used to a woman studying to be a lawyer and Vance takes umbrage. This thread runs throughout the episode as Vance, to prove Murray wrong, decides not to sell the detective agency and instead becomes involved in the case he is working on, suitably titled “The Bentley Emerald.” Nothing remarkable about the plot here, as a famous emerald is stolen while on display and several interested parties are all suspect. How it plays out is the fun part, as both Murray and Vance are, in one way or another, victims of their own scheming, which unknowingly places each of them in harm’s way. And it gives one a smile to see the battle of the sexes work itself out, and just how Vance determines to show herself an equal–by her decision to let her actions speak for themselves, one of which is to finally accept her role as the head of a detective agency rather than grump at the injustice of it all and accept her situation as something she can do nothing about. And in 1941. She is yet another woman showing her drive, intelligence, and independence in 1940s radio (there were a fair number in films of the era, too), much like the Candy Matson character would display eight years later in 1949. Good stuff.

Joan Blondell had a long and respected film career (though she worked in vaudeville and on Broadway before film), one of her later films of note being the 1965 classic The Cincinnati Kid, starring Steve McQueen, Edward G. Robinson, Karl Malden, Ann-Margret, and others. Blondell played Lady Fingers, the experienced poker dealer at the big card game between McQueen and Robinson.

Dick Powell began his career in film in the early 1930s and grew into leading roles primarily as the handsome young romantic lead–with a voice, for he also became known as quite the crooner, singing in many of his early films. His big break, and a film that would change his life and circumstances forever, came in 1944 with the now noir classic Murder, My Sweet, which was based on Raymond Chandler’s 1940 novel Farewell, My Lovely. Powell played Chandler’s hard-bitten detective Philip Marlowe, the first time the character would appear on screen (the second time Marlowe would appear in film would be in the 1946 adaptation of The Big Sleep, where Humphrey Bogart starred as Marlowe–and as a SFnal note of interest, The Big Sleep would be co-scripted by none other than William Faulkner, Jules Furthman, and some unknown lady author by the name of Leigh Brackett.). No more light, romantic roles for Powell, but now a tough guy leading man for which he would come to be known for the duration of his career.

Coincidentally, at the time of this episode of Miss Pinkerton, Inc., Joan Blondell and Dick Powell were man and wife. Their marriage lasted eight years, from 1936-44. 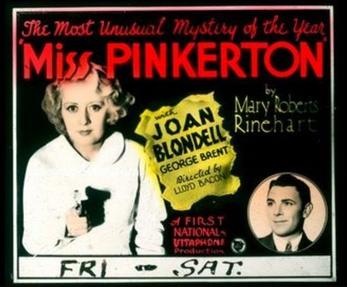 I sometimes run across the most interesting facts and sidelights when putting these OTR shows together, and this episode is no exception. It turns out that there was a Miss Pinkerton film as far back as 1932. And guess who starred in it? That’s right, Joan Blondell. It was based on a 1932 fixup novel by Mary Roberts Rinehart (1876-1958). The lead character was one Hilda Adams, a nurse who found herself involved in solving mysteries–a crime-solving nurse. It was the police department who would label her as “Miss Pinkerton.” Nine years later we have this radio audition episode of Miss Pinkerton Inc., though this time nurse Adams is now Mary Vance, a crime-solving detective agency owner (albeit new and untested). There is a clear connection here, with Blondell the lead in both the film and radio versions, and of course the virtually identical titles. The reason so little is known about the show or its history is still up for grabs, and at this point in time only some dedicated radio historian might hold the answers–or not. Why did the show not proceed after its eminently acceptable audition? Possible answers (some obviously more likely than others) range from a copyright dispute, some other legal entanglement, or one or both of the stars signing a more lucrative film contract and were thus unable to commit to this radio series for the long term (not unheard of). Bumped from its projected time slot for reasons only some network executive could make, and then not picked up at a later date? The mystery behind this single, lone episode–a show with talented leading actors and the retooling/updating of a well received film which was originally adapted from the novel by a respected and prolific author–poses more questions than it provides answers, and so the story surrounding the early demise of Miss Pinkerton, Inc. must ironically and fittingly remain shrouded in mystery.

As a final bit of (rather well known among aficionados) trivia:  Mary Roberts Rinehart (with co-author Avery Hopwood) wrote the 1920 play The Bat. It was a commercial and popular success and ran for nearly 900 performances in New York alone. Filmed three times since then, the most well known to horror fans is 1959’s The Bat, starring Vincent Price and Agnes Moorehead. Bob Kane, credited as the creator of Batman, acknowledged the strong influence of Rinehart’s play for his inspiration.

[Below left: Joan Blondell as Lady Fingers in The Cincinnati Kid – Below right: Dick Powell as Philip Marlowe in Murder, My Sweet, aka Farewell, My Lovely] 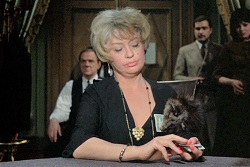 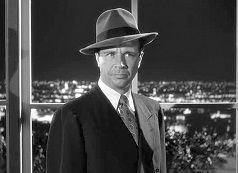 [Below: In 1926 Joan Blondell entered a beauty contest and won to become Miss Dallas, taking home the $2,000 prize–a small fortune in those days. In her early Hollywood years of the 1930s she quickly garnered the title of blonde bombshell. At 5’3″ and measuring 37-22-36, James Cagney, with whom she would appear in six films, quipped: “She has the most beautiful ass in Christendom.”] 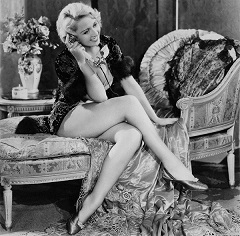 {July of 1941 saw the neighborhood gang drawn to the corner newsstand to quench their insatiable pulp magazine appetites. It was the middle of summer vacation, the United States had yet to enter WWII, and all was right with the world. Gangster and detective films were catching their attention at the local theater and on radio and would compete with their number one love of the SF magazines. Astounding offered its usual monthly offerings of quality science fiction, and with the July issue it hit a home run with Robert Heinlein’s now classic “Methuselah’s Children.” One of the gang picked up The Green Ghost Detective, and almost too late for this would be its final issue. Begun in 1940, it lasted but 7 issues and went through several name changes, the final name change occurring with this last issue. Street & Smith’s Detective Story Magazine (though it too went through many name changes since its origin in 1915) enjoyed a tremendous run and closed shop in 1949. An attempted revival in late 1952 lasted but 6 issues and the first pulp magazine fully devoted to detective fiction finally gasped its last with its September 1953 issue. In 1941 it was a monthly, though from 1915 to August of 1917 it was bi-weekly, and then from 1917 through September of 1932 it held to an astonishing weekly schedule. Such was the popularity of this venerable detective pulp magazine.} 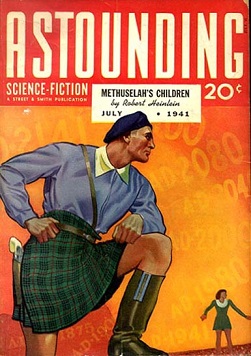 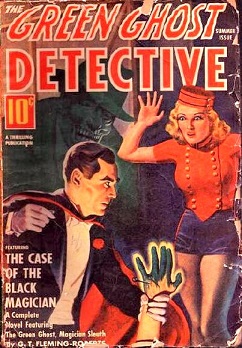 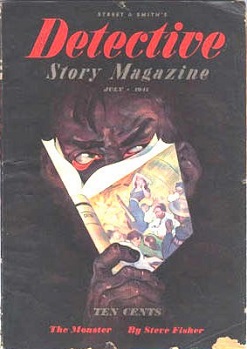