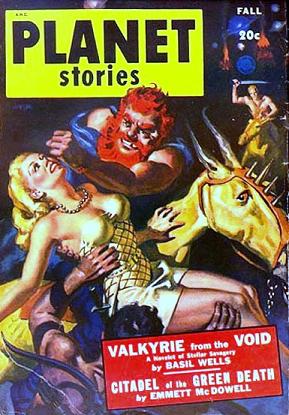 Ray Bradbury’s (1920-    ) “Mars is Heaven!” was first published in the Fall 1948 issue of Planet Stories. Set in the 1960s, it hearkens back to the nostalgia of the rural homelife of the 1920s when it comes to the memories of the Mars explorers shortly after they’ve landed on Mars (which is crucial to the storyline, as you will hear). It was revised slightly (moved ahead 40 years from the 1960s to 2000) for its inclusion in the 1950 Doubleday collection of linked stories we know as The Martian Chronicles, and was retitled “The Third Expedition: April 2000,” though the 1920s aspect was left untouched. This slight revision, therefore, has no meaningful impact whatsoever on the original story.

For those familiar with this classic story I need not recount it here, and for those coming to it for the first time I hesitate even to set the stage, for to experience it for the first time, without preamble, will provide the listener with the greatest reward. And while radio dramatizations are very often superbly rendered, they provide no substitute for the reading of the actual adapted work. I therefore urge those unfamiliar with The Martian Chronicles to purchase a copy (easily available almost anywhere, from used bookstores to Amazon and other online booksellers) and experience Bradbury’s magically seductive (and often poetic and emotionally riveting) prose firsthand. You will not be disappointed.

“Mars is Heaven!” aired on the long-running and superbly produced radio show Escape (1947-1954) on June 2, 1950, which is the version we present here. It was also dramatized on Dimension X (twice), X Minus One, and Future Tense, and for television as an episode of the Ray Bradbury Theater (July 20, 1990).

“Mars is Heaven!” was furthermore accorded the honor of inclusion (of only 26 stories from 1929-1963) in the 1970 Doubleday landmark collection edited by Robert Silverberg, and by vote of the members of the Science Fiction Writers Association (SFWA), as one of the “Greatest Science Fiction Stories of All Time,” as the book’s subtitle proclaims.

For the Bradbury purists among you, let it be known that the first 7 minutes of this adaptation is newly written prelude to the actual Planet Stories and Chronicles version’s opening, both of which begin with the original first line, “The ship came down from space.” That said, do enjoy “Mars is Heaven!,” the fifth radio dramatization of Bradbury’s works we have showcased over the past two and a half years, and which have proved to be (along with our The Shadow episodes), the most popular we have ever run.