Lux Radio Theater (1934-55) aired “Detective Story” on April 26, 1954 as its 878th episode of nearly 1,000. I’ve chosen this radio drama for several reasons: I like detective stories (we’ve run several previously), I like noir detective films, and the subject matter of this one deals with issues most recently in the news with the Ferguson, MO shooting–the role of the police, when does a policeman perform his duties too zealously and overstep the law, and what may drive him to do so. To be clear, I am talking about these issues in a very general way, and by no stretch of the imagination am I making any comment on any specifics of the Ferguson, MO incident. In fact, “Detective Story” has no racial component to it whatsoever. It is the issues raised in both “Detective Story” and the Ferguson incident that I find worthy of taking a look at, for they do overlap to a certain limited but very real degree.

“Detective Story” was originally a play written by Sidney Kingsley in 1949. Renowned film director William Wyler brought the play to film, which saw its debut in late October of 1951. It starred Kirk Douglas and Eleanor Parker, who both reprise their film roles for this lavish radio adaptation. As was the case with all Lux radio productions, the dramatization ran (with commercials) for one hour, featured a full orchestra as well as the original film stars, and was performed before a live studio audience.

“Detective Story” tells the story of a police detective whose early family troubles (concerning his father) have molded his view of life to the point where it has become an obsession in both his professional and personal life and lead to his downfall, for in both there is no room for compromise, everything is black and white. Kirk Douglas turns in a gut-wrenching performance here, as does the beautiful and highly talented actress Eleanor Parker, whose hitherto hidden past Douglas is unable to accept. Though Parker’s love for him is deep and sincere, Douglas cannot reconcile his belief that his once-pristine wife is not the woman he thought she was, and is not perfect. Torn asunder and emotionally crushed by his uncompromising worldview that somehow doesn’t fit the real world, Douglas’s philosophical straitjacket ends up crushing him through a dark but inevitable series of events.

SF fan or not, “Detective Story” tells such a powerfully moving story most will find it nearly impossible not to be drawn in by the high voltage, non-stop intensity of the performances, the timely (and timeless) issues with which it deals, and the cautionary message it carries. Do enjoy. 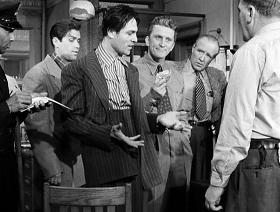 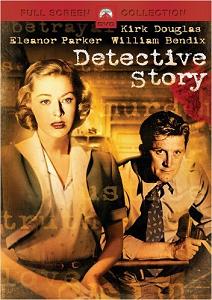 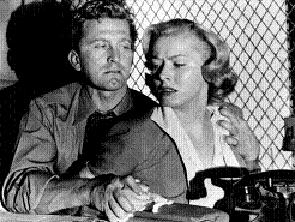