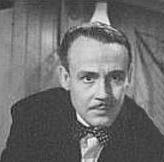 “The Lonely Sleep” first aired on September 25, 1949 on Inner Sanctum, one of Old Time Radio’s most fondly remembered spooky delights. This horror anthology show ran from 1941-1952, and while the scripts and acting were deadly serious, the host always lent a bit of campy levity to the show with horrible puns (much as did the skeletal corpse-host of the television show Tales From the Crypt). The show’s original creepy host until 1945 was Raymond Edward Johnson. Paul McGrath (pictured at right) took over the host duties in 1945, and who is who you will hear in the following episode. Both of these gentlemen were famous for their atrocious puns. The show was sponsored by Lipton Tea, and the female co-host and host played delightfully off each other–and the script–while sliding in the required plugs for Lipton Tea. “The Lonely Sleep” relates the desperate plight of a loner, a quiet and seemingly harmless little man who dresses and arranges mannequins in a department store window…but finds he has a problem dealing with real women. Think a possible episode of the original The Twilight Zone, and you’re there.

While America began to enjoy the prosperity following World War II but still gathered around their radios for much of their indoor news and entertainment, SF fans in 1949 were reading soon to be classic stories by the likes of Theodore Sturgeon and his “The Hurkle is a Happy Beast” (from the premiere {Fall, 1949} issue of The Magazine of Fantasy–the and Science Fiction would be added by the next issue), Ray Bradbury’s “Kaleidoscope” and Henry Kuttner’s “Cold War” (both from Thrilling Wonder Stories, October), and from a few months down the road what would become James H. Schmitz’s hallmark story “The Witches of Karres” (Astounding Science Fiction, December). Notable novels from 1949 include George Orwell’s 1984, What Mad Universe by Frederic Brown, and Edmond Hamilton’s The Star Kings. E. F. Bleiler and Ted Dikty would publish the first of the Best Of anthologies with their groundbreaking The Best Science Fiction Stories, 1949.

Remember that adage about a woman scorned? All we dare offer here is that in “The Lonely Sleep” turnabout is fair play…but for whom?