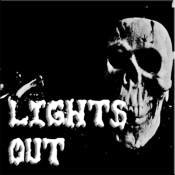 Lights Out! (1934-1947) aired “Until Dead (The Luck of Mark Street)”” on February 2, 1943 as the 18th episode of the 1942-43 season. This is our 19th Lights Out! episode since June of 2009 but only the 2nd since September of 2016, the last coming in July of 2021.  Since that last episode, where much background material was put forth about the series’ history, as well as behind the scenes anecdotes concerning the program’s wild popularity, we felt it was time to repeat the fascinating back story for newcomers, with the usual follow up teaser about the current episode.

The original iteration of Lights Out! ran from 1934-39, producing some 274 original scripts (of which only around 140 are believed to still exist), though it was revived for short periods of time–using many recycled or updated scripts from the 1930s–off and on until 1947. The show was created by Willis (aka Wyllis) Cooper who, the story goes, after a hard day’s work and tired of listening to the same old late night radio dance band programs, decided to write his own supernatural and horror stories for his own amusement (though he frightened himself so much that sometimes he couldn’t finish his own stories until the next morning). A fan of mystery and horror stories (he was especially frightened of ghost stories), he eventually convinced a local Chicago radio station (an NBC affiliate) to produce Lights Out! using his own material, and which would air at midnight, far past the bedtime for impressionable children. After the show had run for maybe a year it was announced without fanfare that the show was at an end, whereupon the radio station was deluged with irate fans from around the country demanding the show continue. Bowing to the pressure, the program was quickly revived and within three weeks Lights Out! once again was scaring the pants off of its ever-growing cult-like audience. It became so popular that fan clubs sprang up all over the country and numbered around 600 by mid-1936. Small to large groups of fans would gather at a host’s house and play cards or listen to the radio for hours ahead of the show’s midnight airing, for it was the early 1930s episodes that made it one of the most talked about horror shows of all time, notably for its gruesome sound effects and grisly scenes of murder (dismembered bodies, bodies dissolved to bones in acid baths, etc.).

Even the cast and crew became so involved in the plays they were reading or producing that as the programs began all lights in the studio were turned off, except for the pin lights needed for the reading of the scripts or those needed by the equipment technicians. Cooper (1899-1955, photo at left) was at the helm from the show’s inception in 1934 through mid-1936, at which point he would venture to Hollywood to work on films (most notably the script for the mediocre 1939 Son of Frankenstein). From 1936 on, the wunderkind Arch Oboler (1909-1987, photo at right) would, with rare exceptions, write all of the show’s scripts through the 1943 season, sometimes borrowing or adapting stories from his other radio shows, a few with a much more social or political message (Oboler was a staunch anti-Nazi)–-though retaining the much-loved supernatural or horror element. Following the 1943 season, others would script the various episodes, including Wyllis Cooper who would pen a handful or two over time. Oboler would remain connected to the show as either producer, host, or both, however, as the money he was paid for his Lights Out! efforts would help finance his own private radio plays for which he would come to be highly regarded, especially during the war years amid the fervor of anti-Nazi sentiment in the United States.

As for this episode, it describes in some agonizing detail a (literally) dirty prison escape, treachery, no honor among thieves, and that there just might be—despite evidence to the contrary at times—a moral compass to the universe. Of course, discovering this moral compass sometimes involves a sweaty visit to a graveyard. Moral compasses are mischievous that way, hiding in the most unlikely places.

{This episode of Lights Out! aired on a cold Tuesday evening in early 1943, which only encouraged the neighborhood gang to head straight for the corner newsstand after school the next day. Astonishing Stories (1940-43) was published by Popular Publications, paid lower rates than its other pulps, and was edited for its first 9 issues by Fred Pohl. Though the magazine lasted but 16 issues it managed to print stories by the likes of Isaac Asimov, Clifford D. Simak, Manly Wade Wellman, Alfred Bester, Fred Pohl himself several times under one of his pseudonyms (James MacCreigh), L. Sprague de Camp, L. Ron Hubbard, and others of note including Henry Kuttner. It managed two issues in 1943, the one pictured below its next to last. Astounding SF (1930–present, now Analog) edited by the legendary editor John W. Campbell, Jr. had been a must buy for years, this issue being no exception with the soon to be classic “The Weapon Makers” by none other than A. E. van Vogt as the cover story. As usual, it held to its monthly schedule in 1943. Thrilling Wonder Stories (1936-55) published colorful adventure fare, with any attempt at accurate science be hanged as unfettered imagination held sway in the service of the page-turning Good Guys vs. Bad Guys (or Aliens) formula that never seemed to grow old. TWS published 5 issues in 1943.} 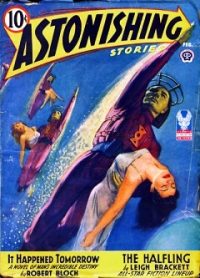 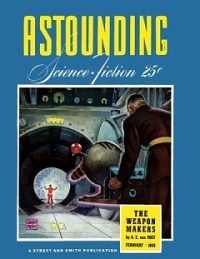 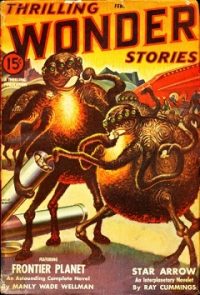