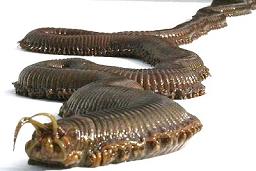 “Revolt of the Worms” aired on Lights Out on October 13, 1942. Written by Arch Oboler, the driving force behind the show soon after its inception in 1934, his strong social conscience (he was a rabid anti-Nazi and keep in mind this episode was written after the United States entered the war in Europe and was now fighting on both the Pacific and European fronts) helps to set the stage for this more or less standard “monster” horror tale.

A chemist/horticulturist is tired of war and now spends his time experimenting with a special hormone to make his roses grow larger, the largest in the world. As you might gather from the title to this episode, guess what grows larger instead when a vial of his secret hormone is tossed away when an unbelieving assistant… well, you get the picture. But Oboler knows drama, and he builds the tension and horror to the breaking point in this little thriller, where, if we didn’t know better, we would swear the screenwriter of the guilty-pleasure Tremors movies might have taken his cue, for Oboler’s worms are big, though Frank Herbert’s sandworms from Dune still hold the monstronormous worm title. The scary looking beast pictured above was found in the Transvaal in 1937 and measured a miniscule 22 feet long.

For the paranoid among you, you might want to check out the “patent pending” ingredients listed on that bag of Super Gro you just bought from that new startup plant fertilizer company you found by googling. Or think twice before trusting the entry in that obscure horticulture encyclopedia named Wikigrow. I’m just sayin’.