Lights Out! (1934-1947) aired “The Dream” on March 23, 1938. To celebrate the show’s fourth anniversary, “The Dream” is the first of four consecutive episodes starring Boris Karloff (1887-1969), the incomparable master of horror. We have previously showcased the second in the Karloff series, “Valse Trieste” (March 30, 1938), and will no doubt get to the others over time.

Our last Lights Out episode came in mid-April where much background material was put forth about the series’ history, as well as behind the scenes anecdotes concerning the program’s wild popularity. We repeat this information below for newcomers, and follow up with comments about this current episode.

The original iteration of Lights Out! ran from 1934-39, producing some 274 original scripts (of which only around 140 are believed to still exist), though it was revived for short periods of time–using many recycled or updated scripts from the 1930s–off and on until 1947. The show was created by Willis Cooper who, the story goes, after a hard day’s work and tired of listening to the same old late night radio dance band programs, decided to write his own supernatural and horror stories for his own amusement (though he frightened himself so much that sometimes he couldn’t finish his own stories until the next morning). A fan of mystery and horror stories (he was especially frightened of ghost stories), he eventually convinced a local Chicago radio station (an NBC affiliate) to produce Lights Out! using his own material, and which would air at midnight, far past the bedtime for impressionable children. After the show had run for maybe a year it was announced without fanfare that the show was at an end, whereupon the radio station was deluged with irate fans from around the country demanding the show continue. Bowing to the pressure, the program was quickly revived and within three weeks Lights Out! once again was scaring the pants off of its ever-growing cult-like audience. It became so popular that fan clubs sprang up all over the country and numbered around 600 by mid-1936. Small to large groups of fans would gather at a host’s house and play cards or listen to the radio for hours ahead of the show’s midnight airing, for it was the early 1930s shows that made it one of the most talked about horror shows of all time, notably for its gruesome sound effects and grisly scenes of murder (dismembered bodies, bodies dissolved to bones in acid baths, etc.).

Even the cast and crew became so involved in the plays they were reading or producing that as the programs began all lights in the studio were turned off, except for the pin lights needed for the reading of the scripts or those needed by the equipment technicians. Cooper (1899-1955, photo at left) was at the helm from the show’s inception in 1934 through mid-1936, at which point he would venture to Hollywood to work on films (most notably the script for the mediocre 1939 Son of Frankenstein). From 1936 on, the wunderkind Arch Oboler (1909-1987, photo at right) would, with rare exceptions, write all of the show’s scripts, sometimes borrowing or adapting stories from his other radio shows, a few with a much more social or political message (Oboler was a staunch anti-Nazi)–though retaining the much-loved supernatural or horror element.

“The Dream” tells the unusual story of a man who has never dreamed, but then one night–quite unexplainably–he experiences not only a dream but a nightmare. A supernatural being (first only one but then more) exhorts him to “Kill! Kill! Kill!,” but who and why he has no clue. Told in flashback from the thoughts of the accused murderer as he awaits the jury’s decision (played by Karloff as only he can), we learn the terrifying details and circumstances leading to his present plight and more and more about the dark entities plaguing him. Is he merely insane, a psychologically unbalanced soul, or are his dreams an intrusion by demons from another universe into ours? You decide, but there is a hint at the very end that might tip your decision toward one point of view over the other, and the only way to be sure is to listen now to Boris Karloff starring in “The Dream.”

Trivia: We think of Boris Karloff as the monster in such classic horror films as 1931’s Frankenstein, or as Imhotep in 1932’s The Mummy, as well as dozens of other horror films. But in real life William Henry Pratt (Karloff’s real name) was a gentle giant. As his wikipedia entry relates: “Beginning in 1940, Karloff dressed as Father Christmas every Christmas to hand out presents to physically disabled children in a Baltimore hospital.”

{Diehard SF magazine lovers though they were, after listening to this harrowing horror tale from Lights Out! several of the neighborhood gang were in the mood for more, and so chose a couple of horror pulps on their regular outing to the local newsstand in March of 1938. A never-miss issue of Astounding remained a solid selection, and as always could be counted on with its solid monthly schedule. Horror Stories’ print run began in 1935 with ten issues, then settled into a bi-monthly sechdule from 1936 through 1939. 1940 saw but five issues, and it stopped its presses with only two issues in 1941, the April issue being its last. Weird Tales (in its first and now classic incarnation) ran from 1923-1954, from 1940 until its demise producing six bi-monthly issues a year.The issue shown below looks like it was a real winner, with stories by Seabury Quinn, H. P. Lovecraft, Henry Kuttner, and Jack Williamson. Notice also one of artist Margaret Brundage’s now iconic (semi- or fully nude) erotic covers, of which she drew many for Weird Tales over the years.} 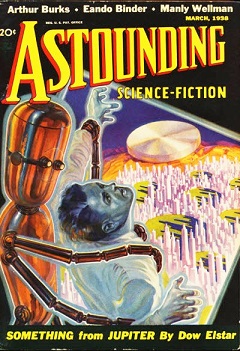 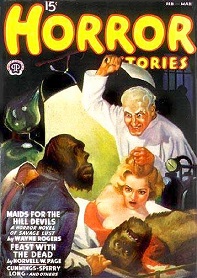 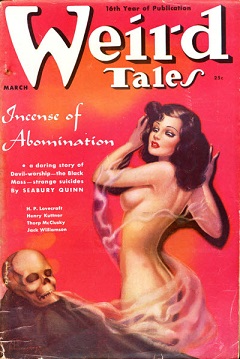 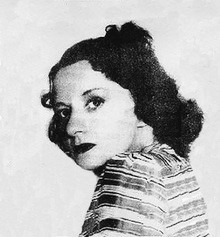