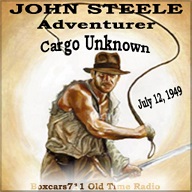 John Steele, Adventurer (1949-1956) aired “Cargo Unknown” on July 12, 1949 as its 12th episode out of approximately 225+. Though old episodes are being found from time to time, currently only about 50 are known to still be in circulation. Of this series, this is only the second episode we’ve showcased here, the first being “The Mission” from late May of this year. Cribbing from those original notes for newcomers, the show debuted just as television was beginning to compete with radio for the attention of the American public, and while it held its own for a respectable number of years, it never quite achieved the recognition that other long-running shows featuring an action and adventure format such as Suspense and Escape were able to garner before the advent ot television.

The show’s premise had roving adventurer John Steele (played by Don Douglas, photo at right) introducing the many adventures of others he had met or run into during his world-spanning travels (some of which involved government work for the State Department), which ranged from the Pacific to the Near/Middle East and beyond. Billed as full of suspense and hard-hitting action, the stories were of the same mold as those in magazines like All-Story and Argosy, two long-running, iconic pulp adventure magazines (All-Story published the first appearance of Edgar Rice Burroughs’s Tarzan with Tarzan of the Apes in its October 1912 issue, for instance).

“Cargo Unknown” takes us to the open seas, where a plane crashes and a trio of passengers is left to drift for many days in a small raft under the burning sun. The story of a former Nazi, his hatred, and the grudge he holds is the focus of this intense story, and how thoughts of supermen can lead a true believer to doom.

{July of 1949 saw the neighborhood gang ecstatic that school was out for the summer, for it made their trips to the corner newsstand even more carefree. Having picked up many of their favorites already, they scored even more with the following titles.  Doc Savage (1933-49) was in keeping with the adventure type story they’d listened to with the John Steele, Adventurer sort of tale. From 1933 through 1946 Doc Savage was a monthly, then reduced its schedule to bi-monthly issues for 1947-48, with its last three issues in 1949 reduced even further to a quarterly schedule. The issue below was the magazine’s final issue. Jungle Stories (1938-54) was another magazine promising adventure and danger, this time with an exotic jungle setting. For all but an issue or two during its long run it was a solid quarterly. Weird Tales (1923-54) was a perennial favorite with its creepy, bizarre tales of monsters, mayhem, the supernatural, and who knew what all else. Pulp magazine lovers prize issues of this “unique magazine” with many issues selling for premium prices at convention dealer rooms. It was bi-monthly in 1949.} 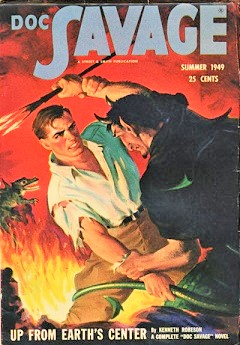 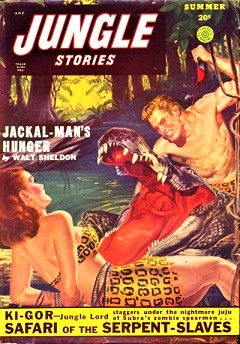 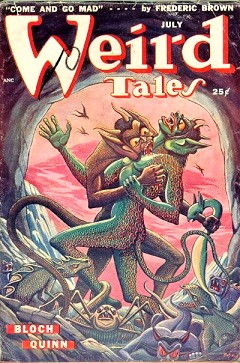