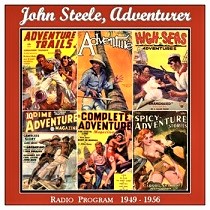 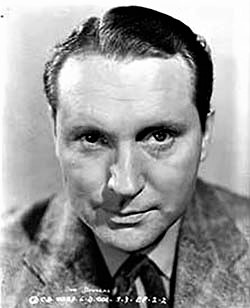 John Steele, Adventurer (1949-1956) aired “King of the Hill” on July 30, 1953 as the program’s 170th show. Though old episodes are being found from time to time, currently only about 50 are known to still be in circulation out of the original estimated 225+. This is only the fourth episode of the show we’ve offered here, the previous trio coming in May and August of 2018 and the last in March of 2019. Cribbing from the original introductory notes for the benefit of newcomers, the show debuted just as television was beginning to compete with radio for the attention of the American public, and while it held its own for a respectable number of years, it never quite achieved the recognition that other long-running shows featuring an action and adventure format such as Suspense and Escape were able to garner before the advent ot television.

The show’s premise had roving adventurer John Steele (played by Don Douglas, photo top right) introducing the many adventures of others he had met or run into during his world-spanning travels (some of which involved government work for the State Department), which ranged from the Pacific to the Middle East to Southeast Asia and many other exotic locales tucked away in dark corners around the globe. Billed as full of suspense and hard-hitting action, the stories were of the same mold as those in magazines like All-Story and Argosy, two long-running, iconic pulp adventure magazines (All-Story published the first appearance of Edgar Rice Burroughs’s Tarzan with Tarzan of the Apes in its October 1912 issue, for instance).

“King of the Hill” stands out because of its theme, it being not in line with the vast majority of other episodes dealing with government espionage, high drama adventure, and other action-oriented subject matter. The theme here addresses an ecological issue, and a specific creature whose niche in the planetary hierarchy has been frequently in the news the past few years. A former supply clerk in the military during World War II has returned home. From his scheming and black market trading he has accumulated enough wealth to finance his dream–to buy an island all his own and retire. He claims he has changed and all his dealings are above board and squeaky clean, but showing off his island to a friend belies his claim when evidence of a dying number of species shows the consequences of his ignorance of how an ecological system works, and why his predilection for cutting corners has unforeseen consequences. A timely tale and warning brought to us almost 70 years ago and worth a listen as a reminder of the delicate balance comprising our planetary ecosphere.

{July of 1953 was a time of beginnings and endings for the neighborhood gang. In a general sense a number of their available magazine selections were of a new generation and signaled a new beginning, the trio below all seeing their first issues in 1950 (with the exception of The Magazine of Fantasy & Science Fiction whose debut and only issue of 1949 appeared late in the year). In a more specific sense it was a time of endings, for their school year ended the previous month and freed them for the carefree days of summer vacation, It was also the end of the Korean War, in which an armistice was signed on July 27, 1953, a mere three days before this episode of John Steele, Adventurer aired. Adult hearts were light, and rejoicing was the order of the day with the war over and parents were all of a sudden freer with their spare nickels and dimes, which the neighborhood gang quickly added to their own grass mowing and empty pop bottle returns earnings. Trips to the local newsstand became more frequent as the variety of magazines increased. The Magazine of Fantasy & Science Fiction (1949-present) was quickly finding its legs, beginning as a quarterly for less than two years, then becoming a bi-monthly, and within another year seeing 1953 as its first full year as a monthly. Future Science Fiction (1950-1954) combined Future and Science Fiction Stories in an effort to maintain at least one viable publication. Though it would last but four short years it managed to attract some quality talent. It was a bi-monthly in 1953. Galaxy (1950-1980) charted new thematic ground for SF, dazzling readers with new takes on traditional themes while also offering stories in areas heretofore unexplored, with many writers flexing their literary muscles to examine social, psychological, and other socio-cultural topics to good effect. Galaxy was a monthly in 1953.} 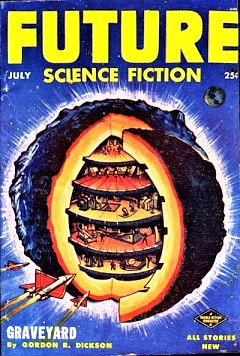 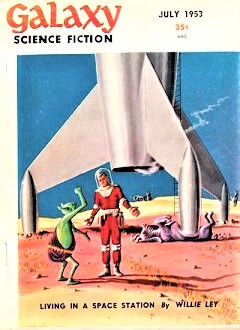