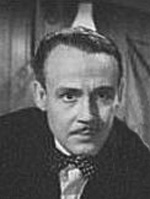 Inner Sanctum (1941-52) aired “Skeleton Bay” on Tuesday, February 5, 1946 as the 257th of its approximately 527 episodes. Unfortunately, most of the shows are lost, with best guesstimates ranging from 140 to “less than 200” still in circulation. However, among these still existing shows, some are only partial episodes, with the majority being AFRS (Armed Forces Radio Service) repeats. While the AFRS is to be commended for having preserved these episodes, it should be noted that it deleted the local, syndicated commercials in order not to play favorites with advertised products. It also removed the original openings and closings, running episodes under the Mystery Playhouse title with Peter Lorre as one of the shows hosts (along with a nameless “Sergeant X” in certain episodes). This is not one of the AFRS episodes thankfully, and is a full, original episode. It features Paul McGrath (1904-1978, photo top right) as the host (he would replace the  original host, Raymond Johnson, after he left the show in May of 1945 to join the armed forces). Lipton Tea would not become a sponsor until the 1945 season, bringing with it the perky co-host and Lipton Tea spokesperson Mary Bennett who became famous for working in Lipton Tea commercials alongside the host’s terrible puns. 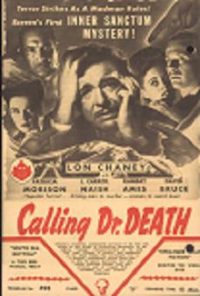 This is the 30th Inner Sanctum episode we’ve run since we began featuring Old Time Radio shows back in 2009. The 29th ran in October of 2019, almost two years ago, so we felt it high time for another. First, however, and of interest to genre fans, we would like to note that between 1943 and 1945 Universal Pictures obtained the rights to, and produced six Inner Sanctum Mystery films. They were Calling Dr. Death (1943), Weird Woman (1944), Dead Man’s Eyes (1944), The Frozen Ghost (1945), Strange Confession (1945) and Pillow of Death (1945). All would star legendary horror actor Lon Chaney, Jr.

As for “Skeleton Bay,” it is a dandy and well thought out murder mystery, with enough unexpected emotional twists and turns to satisfy even the most hard to please fan. It begins innocently enough with a female mystery writer on vacation at Skeleton Bay. She witnesses a murder—but what happens next leads to an escalating series of events that spiral swiftly down to a point of no return. But as in all superior mystery or murder tales, just when you think the story has been resolved and the ending reached, the author tosses in something extra and unforeseen that makes for an even more satisfying denouement. The remarkable Betty Lou Gerson stars as the mystery writer in this dramatic episode, and though “Skeleton Bay” would be produced afresh in 1950 and star Charlotte Holland in the lead role, we obviously prefer this earlier version with Betty Lou Gerson.

{“Skeleton Bay” aired on a Tuesday night. Since there were no holidays from school in the offing (no days off for Valentine’s Day in the near future), the neighborhood gang took their time making it to the nearby newsstand after school the next day to casually peruse the racks for any new issues of their favorite reading material. Astounding SF (1930-present, now Analog) was the first to be grabbed up, especially since a story by A. Bertram Chandler made it an instant sale. Astounding, as always, was a monthly in 1946. The Shadow (1931-49) satisfied the urge for more detective/mystery fare like they’d heard from Inner Sanctum Mysteries the night before, and the bold, dynamic cover didn’t hurt, either. It, too, was a monthly in 1946. Weird Tales (1923-54), the “unique magazine,” also held powerful sway with young imaginations (the creepy dark monster side of their imaginations) and with covers like the one below guaranteed to make them sleep with the night light on, who could resist? WT was a bi-monthly in 1946.} 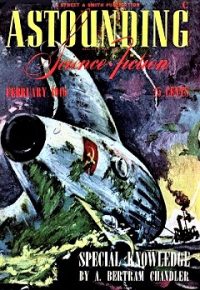 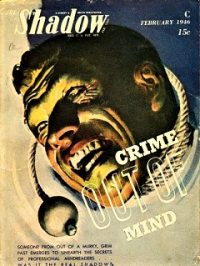 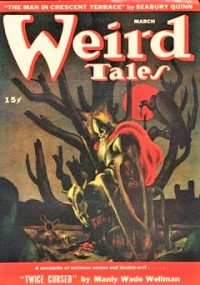