Inner Sanctum (1941-52) aired “The Skull That Walked” (aka “The Walking Skull) on April 15, 1944 as one of its approximately 527 episodes. Unfortunately, most of the shows are lost, with best guesstimates ranging from 140 to “less than 200” still in circulation. However, among these still existing shows, some are only partial episodes, with the majority being AFRS (Armed Forces Radio Service) repeats. While the AFRS is to be commended for having preserved these episodes, it should be noted that it deleted the local, syndicated commercials in order not to play favorites with advertised products. It also removed the original openings and closings, running episodes under the Mystery Playhouse title with Peter Lorre as one of the shows hosts (along with a “Sergeant X” as in this episode). This episode features Raymond Johnson (1911-2001, photo at right) as the original host (he would leave the show in May of 1945 to join the armed forces and was replaced by the more than capable Paul McGrath). Lipton Tea would not become a sponsor until the 1945 season, bringing with it the perky co-host and Lipton Tea spokesperson Mary Bennett who became famous for working in Lipton Tea commercials alongside the host’s terrible puns.

This is the 27th Inner Sanctum episode we’ve run since we began featuring Old Time Radio episodes back in 2009. The 26th came in July of this year and the 25th came an entire year earlier, in July of 2017, so we felt it was high time for another. “The Skull That Walked” starts out in a rather traditional mode–digging in one’s yard after being warned it is a cursed Indian burial ground–but then quickly  takes a couple of bold twists, including an exhumed skull that walks down stairs (which reminds one at this point of Ramsey Campbell’s creepy little horror tale from 1978, “Heading Home.” First published in Stuart David Schiff’s excellent horror/fantasy semi-professional magazine Whispers [World Fantasy Award winner in the non-professional category in 1975, the award’s first year] for its October 1978 issue, it then was brought to a larger audience with its inclusion in The Year’s Best Horror Stories Series VII, edited by Gerald W, Page, DAW, July 1979), and of course in a general sense the 1982 film Poltergeist, which also features events set in motion by disturbing a cemetery. But this strange story decides to go its own way, teasing us as to whether the supernatural explanation for events is the real one or not, and finally ending on a most satisfying note for any horror fan. A rather short script at 20 minutes, the remaining time is well spent in a preview excerpt of Mystery Playhouse‘s next episode, which is a well done teaser. So this week we have an episode and a half, the first one a dandy little cautionary tale explaining the tight-lipped secret of “The Skull That Walked.”

{While the various parents of the neighborhood gang grumbled and even cursed while they sat around the dining room table doing last minute taxes on April 15, 1944, it was a good time for the gang to get out of the house and meet at the corner newsstand. Astounding Science Fiction (1930-present, now Analog) was in its heyday and an author in the middle of perhaps Astounding‘s greatest decade was A. E. van Vogt, whose novella “The Changeling” was the centerpiece of this issue. With “Masters of Time,” another long and previously published Astounding story it would become (in 1950) the “fix-up” novel Masters of Time (Van Vogt is credited with coining the term “fix-up” for this very novel, where two or more stories are stitched together later to form a novel). ASF was a monthly in 1944. Famous Fantastic Mysteries (1939-53) focused on classic mystery reprints and never failed to provide quality work, witness the classic names on this issue’s cover–G. K. Chesterton and William Hope Hodgson. In 1944 it was a quarterly. Also publishing from 1939-53 was fantastic Adventures, where colorful fantasy fare of many varieties enthralled young imaginations, realism of any sort not a major consideration. While ostensibly a bi-monthly in 1944, only 4 issues hit the stands.] 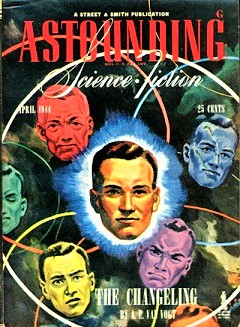 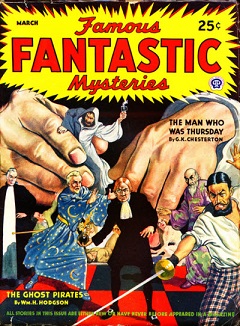 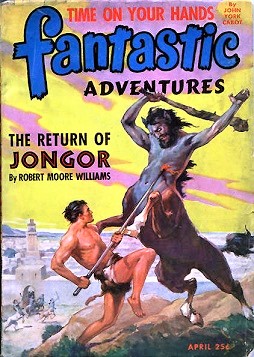