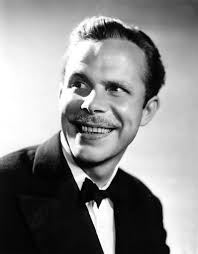 Inner Sanctum (1941-52) aired “Death is a Joker” on June 10, 1944. While Old Time Radio historians have given their best guesses that there were 500+ episodes produced, an exact figure remains elusive, with only 140 believed to be in circulation (i.e. known to exist at this time) due mostly through the efforts of the AFRS broadcasts. Raymond Johnson (1911-2001, photo at right) was the show’s first host and he quickly became known to his late-night listening audience for his atrocious puns. Lipton Tea became the show’s sponsor beginning with the 1945 season (though the show’s ads have been excised from those episodes aired by the AFRS–Armed Forces Radio Services, one of the reasons being they didn’t want to play favorites with specific sponsors.). Host Johnson would leave the show in the middle of its 1945 season to join the military, and was ably replaced by Paul McGrath who continued Johnson’s popular shtick of horrible puns (some lousy, with others darkly droll and quite funny). 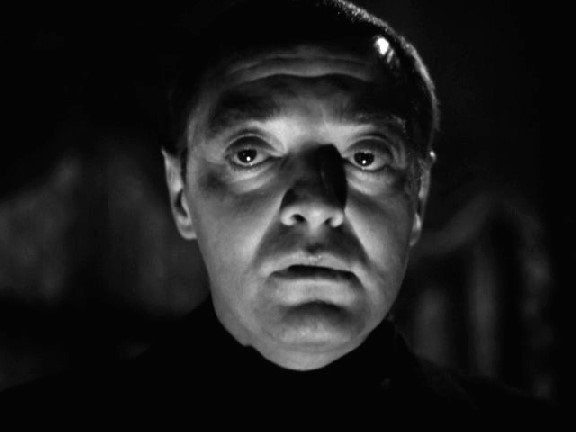 “Death is a Joker” is an odd duck of sorts. While an episode of Inner Sanctum, it aired under the auspices of, and was hosted by Mystery Playhouse, which aired a variety of mystery shows for AFRS for American servicemen abroad. Peter Lorre hosted Mystery Playhouse, and coincidentally stars in this Inner Sanctum episode, so we get a double dose of his memorable voice and acting, both of which are associated with his horror persona. Lorre here plays an unattractive comedian in love from afar with is best friend’s fiance, and through an odd series of circumstances (involving murder, with a twist) finds that she loves him too, a turnabout that leads him to act in a way he would never have otherwise contemplated. And then there’s that other twist at the end that… but never mind, you’ll have to listen for yourself to enjoy the delightful irony and to discover just why “Death is a Joker.” The other reason this episode is an odd duck is that while many of the existing episodes of Inner Sanctum survive today due to the AFRS broadcasts, they took some liberties here and there to fit their format. Such is the case here, for “Death is a Joker” is a rather short episode (especially with the original ads stripped out; see first paragraph above), so the AFRS filled the remaining time with an excerpt from an upcoming episode (a rerun as it turns out) of Creeps By Night, starring none other than Boris Karloff! This particular excerpt is of interest–not only because Karloff is at his creepy, devilish best–but because it is part of an episode of Creeps By Night. Of the entire run of 23 episodes (February 15-August 15, 1944) only 6 or 7 Creeps By Night episodes are known to still exist. We have run 3 of them here, the most recent being last week. The remaining episodes on my disc do not match an approximate date from this Karloff excerpt, so it certainly looks like this may be an excerpt from one of the original lost episodes, but now saved in its Mystery Playhouse rebroadcast for the AFRS. However, research shows a possible answer to the identity of the Karloff excerpt. On April 25, 1944 (about 6 weeks before this Inner Sanctum episode) Creeps By Night ran what is purported to be its 10th show, “Those Who Walk in Darkness,” which fits the narrative of the excerpt. Since Karloff hosted the first 12 episodes before leaving the show, and starred in a number of them, this excerpt is undoubtedly that show, and the excerpt Lorre introduces would have been a forthcoming AFRS rerun–in its entirety–so not technically a lost episode. Be that as it may, lost or not lost, in any case this week we get a double horror treat with both Peter Lorre and Boris Karloff filling the bill. An odd, but fortunate set of circumstances, indeed.

{Not only June 1944, when the neighborhood youngsters were glued to the radio listening to shows like this week’s offering, but the entire summer of 1944 was a great period for the SF pulp magazines as well. The local newsstand was literally overflowing with them, which made the gang’s choices almost impossible. After lengthy consideration and many thumbed pages (and some stern looks from the clerk behind the counter), they came away with the magazines pictured below. Astounding (1930-present, now Analog) was always a must-have and was its usual solid monthly self. Planet Stories (1939-55)–despite the less than superior cover–nevertheless portrayed the elements that made pulp covers so enticing: an otherworldy landscape, a scantily-clad damsel in distress, and a menacing monster, with the handsome hero fearlessly attacking said monster. (Note that our hero is wearing a helmet, ostensibly to breathe, while our heroine needs no such breathing apparatus.) Planet Stories was a quarterly in 1944. Weird Tales (1923-74) was always good for its creepy, macabre stories and magnetic, eye-catching covers, and this one was no exception. In 1944 it was a bi-monthly. As mentioned above, the summer of 1944 was a great time to read what would become, in many instances, classic stories by now legendary authors. Just look at the iconic names on the three covers below:  Murray Leinster, Leigh Brackett, Robert Bloch, August Derleth, Seabury Quinn, and both Ray Bradbury and Manly Wade Wellman twice. It doesn’t get much better than that. But wait, there’s more! A quick look at the contents of the June 1944 Astounding reveals more classic authors: Hal Clement, Fredric Brown, Randall Garrett, and Part 2 of The Winged Man by A. E. van Vogt and E. Mayne Hull (Hull being Mrs. Van Vogt).}

(Below: Cover of the March 1980 DAW pb edition of The Winged Man. Cover art by Douglas Beekman.) 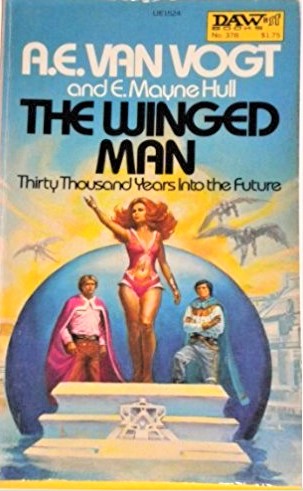 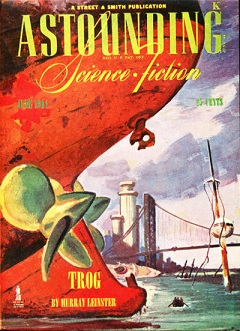 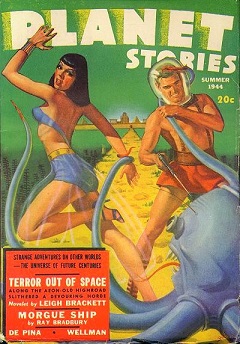 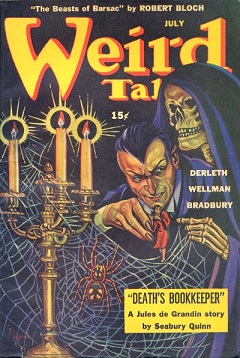