Inner Sanctum (1941-52) aired “Death Bound” on Monday,  February 3, 1947 as the 304th of its approximately 527 episodes. Unfortunately, most of the shows are lost, with best guesstimates ranging from 140 to “less than 200” still in circulation. However, among these still existing shows, some are only partial episodes, with the majority being AFRS (Armed Forces Radio Service) repeats. While the AFRS is to be commended for having preserved these episodes, it should be noted that it deleted the local, syndicated commercials in order not to play favorites with advertised products. It also removed the original openings and closings, running episodes under the Mystery Playhouse title with Peter Lorre as one of the shows hosts (along with a nameless “Sergeant X” in certain episodes). This is not one of the AFRS episodes thankfully, and is a full, original episode. It features Paul McGrath (1904-1978, photo top right) as the host (he would replace the original host, Raymond Johnson, after he left the show in May of 1945 to join the armed forces). Lipton Tea would not become a sponsor until the 1945 season, bringing with it the perky co-host and Lipton Tea spokesperson Mary Bennett who became famous for working in Lipton Tea commercials alongside the host’s terrible puns. Bromo Seltzer became the show’s new sponsor in July of 1946 and remained so until 1950, at which time Mars Candy Bars would assume sponsorship of the show until 1952. This is the 31st Inner Sanctum episode we’ve run since we began featuring Old Time Radio shows back in 2009. The 30th ran in September of 2021 and the one previous ran in October of 2019 almost two and a half years ago, so we felt it high time for another. First, however, and of interest to genre fans, we would like to note that between 1943 and 1945 Universal Pictures obtained the rights to, and produced six Inner Sanctum Mystery films. They were Calling Dr. Death (1943), Weird Woman (1944), Dead Man’s Eyes (1944), The Frozen Ghost (1945), Strange Confession (1945) and Pillow of Death (1945). All would star legendary horror actor Lon Chaney, Jr.

“Death Bound” features a small time hood by the name of Rocky. A tough-talking little creep with big plans and a beautiful girlfriend who is tired of the promises of the good life he never keeps, Rocky is contacted by a mysterious man, but only by voice, a man who claims to be able to tell his future—a future where Rocky will come into a lot of money. When a second prophecy involves his death things get interesting, and a frightened Rocky panics, leading to all sorts of skullduggery and painfully wrong decisions.

“Death Bound” stars the late Hollywood film star Richard Widmark (1914-2008) in a role (that of a two-bit gangster) he would make famous in his film debut six months after this radio episode aired, with the September 1947 release of Kiss of Death. In this noir film Widmark played the sociopathic Tommy Udo (photo at right), for which he was nominated for an Oscar as Best Supporting Actor. In one of the film’s most dramatic scenes, Widmark’s character pushes a wheelchair bound old lady down a flight of stairs to her death, all the while cackling with the maniacal laughter that once heard can never be forgotten. So listen now to Richard Widmark as “Rocky,” a small time gangster in a superb example of gritty radio noir involving murder, a trip to a graveyard to dig up a corpse, and, well…you get the idea.

{“Death Bound” aired on a Monday evening in early February of 1947, which meant that the neighborhood gang had to wait for school to let out the next day before heading to their home away from home, the nearby newsstand. Still stoked from the previous evening’s Inner Sanctum tale, they were in the mood for more in the same vein, so chose from the wide selection of detective pulps the newsstand offered. Black Mask (1920-1950) had long been the premiere detective pulp by 1947 and continued to attract new readers over its long run. It was a bi-monthly in 1947. G-Men Detective (1935-1953) quickly became the most popular of the federal agent crime story magazines following its debut issue in 1935. It also was a bi-monthly in 1947. New Detective (1941-1955) promised the “newest” in crime fiction, with an emphasis on stories of police detectives written by some of the most popular authors in the genre, along with the usual spectrum of crime fare. It too published on a bi-monthly schedule in 1947.} 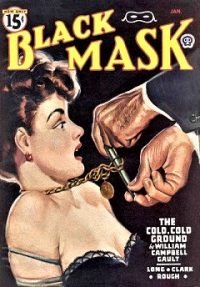 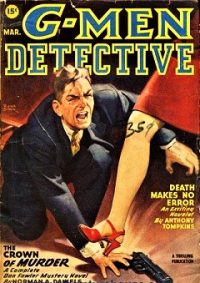 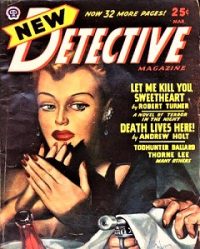