Inner Sanctum (1941-52) aired “Dead Man’s Debt” on Tuesday,  June 26, 1945 as the 233rd of its approximately 527 episodes. Unfortunately, most of the shows are lost, with best guesstimates ranging from 140 to “less than 200” still in circulation. However, among these still existing shows, some are only partial episodes, with the majority being AFRS (Armed Forces Radio Service) repeats. While the AFRS is to be commended for having preserved these episodes, it should be noted that it deleted the local, syndicated commercials in order not to play favorites with advertised products. It also removed the original openings and closings, running episodes under the Mystery Playhouse title with Peter Lorre as one of the shows hosts (along with a nameless “Sergeant X” in certain episodes). This is not one of the AFRS episodes thankfully, and is a full, original episode. It features Paul McGrath (1904-1978, photo top right) as the host (he would replace the original host, Raymond Johnson, after he left the show in May of 1945 to join the armed forces). Lipton Tea would not become a sponsor until the 1945 season, bringing with it the perky co-host and Lipton Tea spokesperson Mary Bennett who became famous for working in Lipton Tea commercials alongside the host’s terrible puns. Bromo Seltzer became the show’s new sponsor in July of 1946 and remained so until 1950, at which time Mars Candy Bars would assume sponsorship of the show until 1952.

This is the 32nd Inner Sanctum episode we’ve run since we began featuring Old Time Radio shows back in 2009. The 31st ran in January of this year (2022) and the one previous ran in September of 2021, with the one previous to that in October of 2019 almost two years ago, so we felt it high time for another. First, however, and of interest to genre fans, we would like to note that between 1943 and 1945 Universal Pictures obtained the rights to, and produced six Inner Sanctum Mystery films. They were Calling Dr. Death (1943), Weird Woman (1944), Dead Man’s Eyes (1944), The Frozen Ghost (1945), Strange Confession (1945) and Pillow of Death (1945). All would star legendary horror actor Lon Chaney, Jr.

“Dead Man’s Debt” begins with a jailed criminal awaiting his judgment from the jury on a murder charge. In today’s America of 2022 there are outcries against lenient district attorneys who ignore the law or interpret it such that those who commit a range of crimes from misdemeanors to capital offenses are set free, or given much reduced sentences. There happens to be yet another tier to the justice system determining whether or not an alleged criminal goes to prison or is set free. This is one of those stories, and in its telling we are witness to several twists and turns in the life of a criminal, a number of murders both past and present, and a love story placing an unexpected bow on this unusual tale concerning a “Dead Man’s Debt.”

{This episode of Inner Sanctum aired on a Tuesday evening. For the neighborhood gang, with summer vacation still new, it meant a trip to the nearby newsstand the next morning to find magazines with more stories of crime, and those who fought against it. Dime Detective (1931-53) was an extremely popular detective pulp, running for some 274 issues. It was a monthly in 1945. Popular Detective (1934-53) published 133 issues in its 19 years, and as one source proclaimed was noted for the “consistent high quality of [its] material.” It was a bi-monthly in 1945. Super-Detective (1940-50), from October 1940 through October 1943 featured a full-length novel with “Jim Anthony, scientist, businessman, and adventurer.” This character, while popular enough to last through 3 years of novels, can’t help but be compared to the similar—and much more popular—Doc Savage. Super-Detective managed 9 issues in 1945, the first 7  being monthly while the remaining two (Sept. & Nov.) closed out the year as bi-monthlies.} 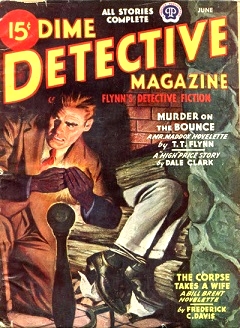 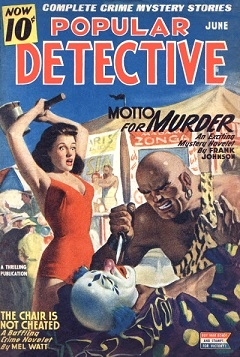 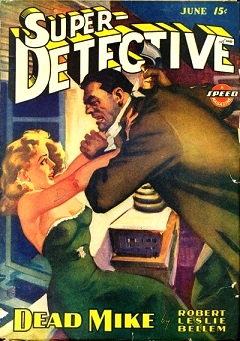