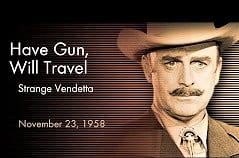 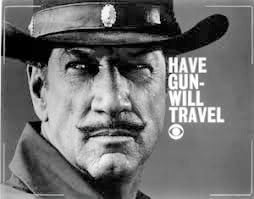 Have Gun–Will Travel (1958-60) aired “Strange Vendetta” on November 23, 1958 as the show’s first episode out of what would be a total of 106 over the next two years. The very existence of the radio show is an odd duck, in that while not unique it was one of the very rare radio shows to be a spinoff of a successful tv show, which is backwards from the usual sequence of events, with the radio show coming first, then the tv show (for examples of the usual order, see Gunsmoke, Dragnet, and The Lone Ranger). In this case, Have Gun–Will Travel on television first aired in 1957 and its radio counterpart aired its first episode (the one we present here) just over a year later in 1958. The original CBS tv series would run from September 1957 through April of 1963 and proved quite popular. Richard Boone (1917-1981) starred as Paladin, a cultured, educated, gun-for-hire living in San Francisco’s swanky Carlton Hotel during the period following the Civil War to approximately 1875 as a well-appointed man of wealth and sophistication, who earned his living by putting ads in local newspapers as a high-priced gunslinger with the simple calling card of “Have Gun–Will Travel.” While expensive to hire ($1,000 per day plus expenses) and ready, willing, and able to use his trademark gun when necessary, he often was a master at settling disputes or resolving issues in a diplomatic and bloodless manner.

Famed radio director of such shows as Suspense, Escape, and later the popular tv westerns such as The Virginian and Gunsmoke, Norman Mcdonnell championed the idea of spinning off a successful tv show to radio, and Have Gun–Will Travel on radio was born. One of my favorite radio and tv actors, John Dehner (1915-1992), was cast as radio’s Paladin, his resonating baritone voice perfect for the role. Dehner himself was in many ways like the character he played, for his father traveled a lot and Dehner went to school and was educated mostly in Europe (though he was born in New York). Along the way, he learned to speak four languages fluently and others to a lesser degree (including Norwegian, French, Spanish, Italian, Swedish, and even some Hopi Indian). In the early 1940s Dehner worked for Walt Disney Studios as an animator and did work for such iconic animated features as Fantasia (1940), Bambi (1942) and some Pluto, Donald Duck, and Mickey Mouse cartoons. After a stint in the Army during World War II he held jobs as a radio news editor and disc jockey, then graduated to numerous acting roles of various sizes, including, but not limited to shows such as The Hermit’s Cave (as host), and supporting roles in The Whistler, Gunsmoke, Suspense, Escape, Philip Marlowe, Frontier Gentleman (star), and the week following the demise of Frontier Gentleman, the star of Have Gun–Will Travel. 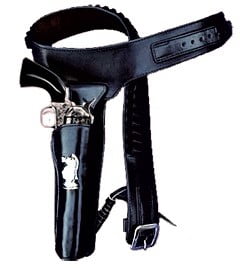 As to “Strange Vendetta,” it has already been noted that it was the debut show for the radio program, but also of note is that Norm Macdonnell was not only the champion of spinning off a radio prorgram from its parent television show, but his idea to rewrite as closely as possible for radio the original tv scripts, thus, the initial 30 episodes of Have Gun were lifted from the already aired tv shows. [After that, Macdonnell would leave the show and go on to direct and write for television’s Gunsmoke, tv’s longest running (1955-75) continuous prime time show in history.] “Strange Vendetta” originally aired on the televisoon show on October 26, 1957 as the show’s 7th episode, and then was selected as the radio show’s first episode. It opens as Paladin (Dehner) is attending the opera in his beloved San Francisco. He is befriended by a beautiful young woman and her older, distinguished husband who are unable to procure seats for the performance. One thing leads to another and this wealthy older man is attacked during the opera and severely wounded, then later dies. His last wish, after hiring Paladin, is to have his body shipped home to his young wife, who he has sent packing ahead of his demise. But then things get tricky and Paladin discovers all is not as it seems and he is but a pawn in a larger scheme. It’s a fine introductory example of one of the most popular westerns on both radio and television and I recommend it to you.

Much more of interest can be written about both the radio and tv versions of Have Gun–Will Travel and their respective actors, but I hope these brief notes have given you a fair idea of what to expect from this fine western. 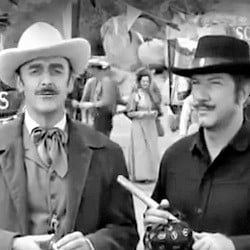 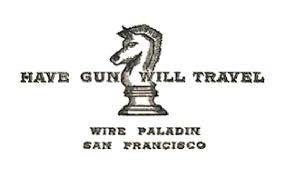 {The date this episode aired, November 23, 1958, was a Sunday, and the neighborhood gang was not looking forward to Monday, and school, though Thursday of the coming week was Thanksgiving and they would enjoy a two day holiday. Fortunately, they had met at the corner drugstore the day before and stocked up on all the reading material they would need to tide them over until the short Thanksgiving holiday. Astounding SF (1930-present, now Analog) was a sure buy, especially with that eye-catching cover by H. R. Van Dongen illustrating the cover story by Poul Anderson. Astounding was, as always, a monthly in 1958. The Magazine of Fantasy & Science Fiction (1949-present) though a relative newcomer to the ranks of SF magazines, had caught fire by this time and its stable of authors read like a Who’s Who of the field’s most popular and prolific talent. Notice that Poul Anderson enjoyed the cover story for this issue of F&SF as well as that of the November Astounding, a nice month for the future SFWA Grand Master. This issue’s cover artist was John Pederson, Jr.. F&SF had become a monthly in late 1952 and would retain that schedule for many decades. Galaxy (1950-1980) published its first issue almost a year to the month (October 1950) after F&SF debuted (Fall 1949) and was drawing its fair share of top talent in 1958 as well. Making the cover with their stories were two future SFWA Grand Masters, Clifford D. Simak and Robert Silverberg. This issue’s cover artist was Paul E. Wenzel. A monthly since its inception, the magazine would draw down to a bi-monthly schedule in 1959, 1958 being its last year of monthly publication.} 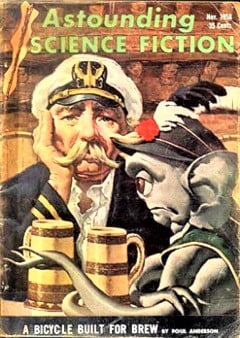 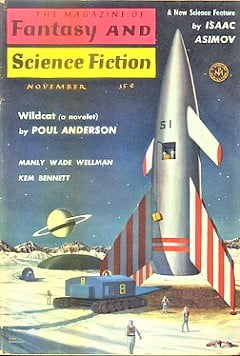 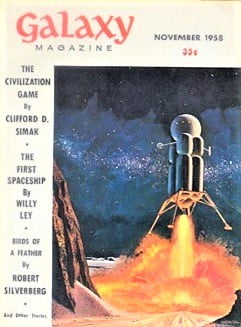