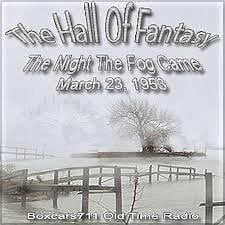 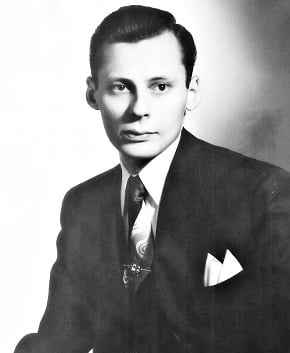 Hall of Fantasy aired “The Night the Fog Came” on March 23, 1953. Hall of Fantasy (1946-47 from station KALL in Utah, and 1949-53 from station WGN in Chicago) aired an estimated 200+ scripts or (combined) broadcasts, yet only between 40-45 are thought to still exist (though estimates vary), which is a shame, for creator, writer, director, and sometimes Hall of Fantasy actor Richard Thorne (1925-2007*, photo at right) was an extremely talented individual, and those episodes still surviving are held in high regard by OTR fans. The first two years airing in Utah (on those stations on the Intermountain Network) the show concentrated on straight mysteries or murder plots, but when the show ended up in Chicago and was subsequently revived due to a fortunate turn of fate, it shifted focus to the supernatural or straight horror story format for which it became famous, all but adaptations of the classics being written by Thorne. The show went national on the syndicated Mutual Network in 1952.

[*I would like to express my thanks to Old Time Radio historian Karl Schadow for supplying the birth and death dates for Richard Thorne after my own search came up empty.]

The network would run rebroadcasts from late 1953 into 1954, though because of the shoddiness of research and/or outright collusion on the part of a few commercial sellers attempting to fob off a number of rebroadcasts as originals to aid their sales, it is quite possible that many of their shows are broadcasts from years earlier, with no foreseeable hope of pinning down their first airings due to the incomplete and/or unverifiable historical record.

“The Night the Fog Came” is the 13th episode of Hall of Fantasy we have run since the first in 2011. It is only the 2nd since September of 2017, with the last coming in October of 2019. It is also one of the scariest and frightening episodes we can remember, due primarily to its similarities to the current COVID-19 pandemic. It features an aquatic microscopic lifeform that can also spread on land via tiny water droplets carried by a fog and is highly deadly to those with whom in comes in contact. It appears seemingly out of nowhere and begins spreading quickly from the wetlands of Lake Superior, and if not destroyed will soon threaten all life on Earth. The great puzzle is how first one person, then several more, are found dead by apparent drowning–yet their bodies are found far from water. The scientists attempting to find the cause of this unknown plague and what to do about it in as short a time as possible mirror some of the same challenges scientists face today with the COVID-19 virus. The writing and acting are top notch as are the dramatic sound effects, making this an episode you won’t easily forget. I hesitate to do so but feel I must caution those who may have lost a loved one, or are otherwise personally affected by the COVID-19 virus, that this episode might be a bit much to take, so use your best judgment.

{March of 1953 was a time of flux, of beginnings and near endings for the magazines below, but this knowledge was not privy to the neighborhood gang on this particular trip to their nearby newsstand, they not being able to parse the future quite yet, though they had been reading about different fictional futures for quite some time. Famous Fantastic Mysteries (1939-53) spotlighted classic stories from the 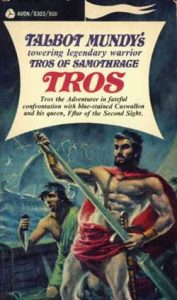 earlier pulps before there were distinct SF or F genres, and this issue the featured tale came from veteran pulpster Talbot Mundy, whose Tros of Samothrace and other stories featuring Tros are still beloved and sought by fans of dark historical fantasy, where pre-Roman Britons fought against the armies of Julius Caesar. The Tros stories would probably be called Sword & Sandal historical fiction today, for they are bloody, fraught with intrigue, and with hints here and there of the supernatural as when druids gather in the black of night with only the light from a circle of torches revealing their dark secrets. FFM was a bi-monthly in 1953 and the issue below was the third to its final issue, that coming with the June 1953 issue. IF (1952-74) was just beginning its long run in March of 1953 as a sister magazine to Galaxy. When times got rough several decades later only Galaxy would survive, it being the senior of the two magazines. IF was a bi-monthly in 1953. Thrilling Wonder Stories (1936-55) was still hanging in there as a bi-monthly but would only publish 5 of its 6 issues in 1953. It would manage but 4 issues in 1954, and its final and only issue of 1955 was its Winter issue early in the year. That said, note that from the cover stories on the issue below it was still able to draw top talent, with fiction by Damon Knight and Katherine MacLean.} 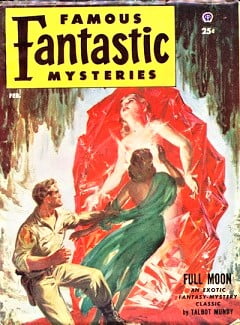 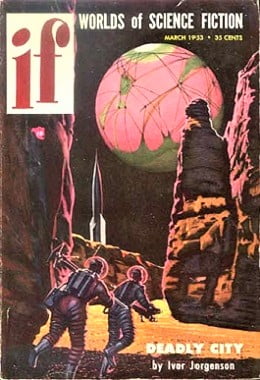 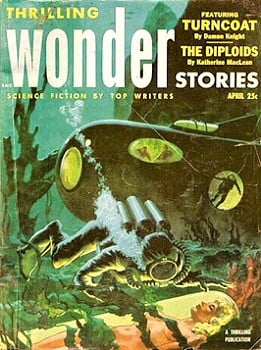