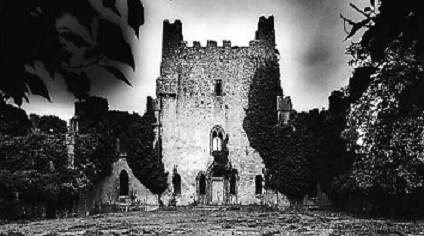 Hall of Fantasy aired “The Castle of La Voca” on August 22, 1952. The show had its origins in Salt Lake City, UT where it ran off and on (1946-47 and 1949-52) until it was picked up and went national through the Mutual Network in Chicago with its August 22, 1952 broadcast–“The Castle of La Voca.” This particular show proved one of the most popular and was broadcast several more times through 1954, the year of the show’s eventual demise. Of the estimated 200 shows, collectors have found (to this date) only 47 to have survived.

“The Castle of La Voca” takes us to eastern Europe and a couple traveling the countryside. They’ve heard the legends about the presumed haunted Castle of La Voca and the evil Baron Drago–dead now hundreds of years–and his never-ending desire for war. One evening they arrive near the castle, but as night approaches decide to hold up in a nearby inn before visiting the abandoned castle. The innkeeper delights in recounting the legend of the Baron Drago, and how he still sleeps deep in the cold depths of his castle, waiting for a pre-ordained date from which to emerge and once again seek the nearest war. Enthralled, the couple are taken by the innkeeper the next day to the castle where they find…. But enough, no spoilers. Suffice it to say that while “The Castle of La Voca” shares traits with many haunted castle tales handed down over the centuries, this one is uniquely its own, with an ending that holds more meaning for contemporary listeners than is usually expected. The acting is well done, and the sound effects are particularly effective and atmospheric.

{August of 1952 found our young neighborhood SF fans lingering inside the cool interior of the local drugstore to avoid the sweltering heat, which gave them the opportunity to flip through their beloved magazines even longer than usual. The new magazine on the block, Galaxy was a monthly from its very first issue in October of 1950. It would remain a monthly through 1958 when it would switch to a bi-monthly schedule for almost 10 years, then publish on no discernible set  schedule until it folded in 1980. 1952 saw Startling Stories switch from its long-running bi-monthly schedule to a monthly schedule, but it lasted only through 1952. 1953 saw Startling print 8 issues, and for 1954 and 1955 it went quarterly before folding with its Fall 1955 issue. With a few exceptions, Weird Tales had been a monthly since its debut in March of 1923. 1940 saw it go to a bi-monthly schedule which it would maintain until its demise with the September 1954 issue. Note that this issue of Startling Stories featured Philip Jose Farmer’s landmark, controversial story “The Lovers,” which broke a long-standing taboo in SF, that of addressing any sort of sexual theme seriously (aliens can only reproduce by mating with humans in “The Lovers”). The genre would never look back.} 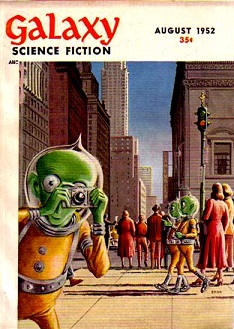 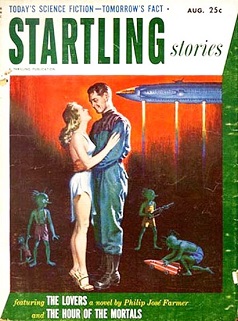 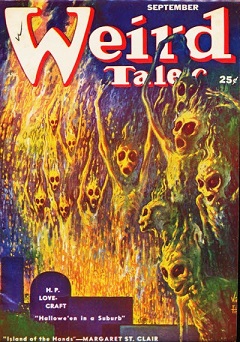