Gunsmoke (April 26, 1952-June 18, 1961) aired “Westbound” on January 3, 1953 as the 37th of its 480 original episodes. The show took place during the post-Civil War era (circa 1870) in Dodge City, Kansas during the expansion and settling of the Old West. On radio William Conrad (1920-1994, photo lower left) played Marshal Matt Dillon. On television Marshal Dillon was played by James Arness. On radio Parley Baer (1914-2002) played Dillon’s “assistant” Chester Wesley Proudfoot. On television Chester was played for the first couple of years by Dennis Weaver. On television, Chester’s last name was changed from Proudfoot to Goode. On radio Howard McNear (1905-1969) played Dr. Charles Adams. On television Doc was played by Milburn Stone. On radio Miss Kitty was played by Georgia Ellis (1917-1988, photo lower right). On television Miss Kitty was played by Amanda Blake. While the radio program ran for a solid 10 years (1952-61), the television program ran for 20 years (1955-75) and overlapped with its still airing counterpart on radio, and until programs airing after the television show’s demise, television’s Gunsmoke ranked as the longest running original live action (as opposed to animated) show of all time. 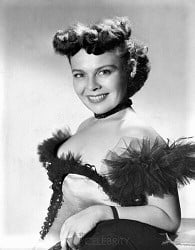 Those familiar with the original The Andy Griffith Show (1960-68) on television will recognize the names of Parley Baer (photo at left) and Howard McNear (photo at right). They would find themselves teamed up again as they were on radio’s Gunsmoke, with Baer playing the character of Mayberry Mayor Roy Stoner, and with McNear playing Floyd the Barber. Sometime shortly after he was cast as this recurring character McNear had a stroke, almost completely paralyzing the left side of his body. He took more than a year off, but when asked by Andy Griffith to return he rejoned the cast in 1964, though camera angles and his poses had to be adjusted for. His condition deteriorated so much that after time he could no longer remember his lines. Frustrated, McNear left the show in 1967. Coincidentally, to the date of the original airing of the episode presented here–January 3rd–Howard McNear passed away from complications of pneumonia following another stroke on January 3, 1969. Parley Baer, his longtime friend from both Gunsmoke on radio and The Andy Griffith Show on television, read his eulogy.

In “Westbound” we find Marshal Dillon and Chester traveling from Dodge to Abilene, KS (a trip of around 186 miles to the northeast of Dodge, Abilene being just south of Manhattan and about 93 miles due north of Wichita) to secure a prisoner wanted for murder, but meeting stiff resistance from the local deputy sheriff and the prisoner’s kinfolk. We’ve seen this scenario (or slight variations of it) countless times in many early Western films, or as an episode of a tv Western, but in 1952 TV was still quite new and almost all of its programming seemed fresh to viewers’ eyes. So enjoy this relatively early episode of radio’s Gunsmoke, which aired almost 66 years ago to the day of this presentation. {Rip-roaring and ready to go in the early days of 1953, the neighborhood gang could hardly wait to visit the nearby newsstand and call dibs on several issues of their favorite reading. Astounding (1930-present, now Analog) rang in the new year with an issue featuring a story by none other than Poul Anderson, with its eye-catching conver. It soon found itself in more than one pair of sweaty little hands. It was a monthly in 1953. The Magazine of Fantasy & Science Fiction (1949-present), now on a monthly schedule from its initial quarterly schedule, was still running some reprints along with its original material and was attracting a whole new audience for its fiction, while hoping to retain the field’s traditional core readership. No easy task. Galaxy (1950-80) entered the fray a scant year after F&SF‘s debut, but ran material that explored different themes heretofore relatively ignored by decades of traditional SF–and it too was hoping to tap into new audiences. Like Astounding and F&SF, Galaxy was a monthly in 1953.]