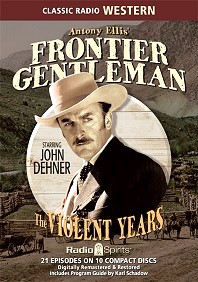 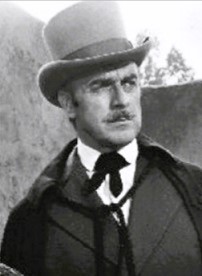 Frontier Gentleman (February 2, 1958–November 16, 1958) aired “Madame Belle Siddons, Confederate Spy” on June 29, 1958 as the 21st of the short-lived series’ 41 episodes. The length of this quality western had more to do with the fact that by 1958 television had become the dominant entertainment venue in America, and this new medium was already into reruns of any number of TV westerns. Frontier Gentleman, while not groundbreaking as was Gunsmoke (on radio and TV, for instance), and while exhibiting a novel approach of its own when it came to character over action in most cases, still could not break through the glass ceiling—or glass television screen—and last longer than it did.

Speaking of the novel approach the series took in portraying the western, its protagonist was of a different stripe altogether. This so-called frontier gentleman was an Englishman. His name was J. B. Kendall and he had spent most of his career as a British Cavalry officer in the Punjab region of Northwest India/Eastern Pakistan. He accepts a position as a correspondent for The London Times to travel to the Wyoming and Montana territories of the still-forming United States in the post-Civil War 1870s. His mandate is to report first-hand what he sees and learns of this still untamed land, with its warring Indian tribes, sometimes successful, often-times failing bouts of exploration, colonization, and pretty much still lawless time in the young country.

The inestimable TV, film, and radio actor John Dehner (1915-1992, photo top right) would win the role of J. B. Kendall and he played it to perfection, even answering the question as to why his British accent seemed almost unnoticeable. Dehner’s distinctive voice was one of his recognizable calling cards across his numerous radio appearances, placing him in the top rank of favorite radio voices along with those of Orson Welles, William Conrad, and Frank Lovejoy. Non-plussed when this top-notch western series was cancelled, Dehner was hard at work on another western series within a week, none other than Have Gun—Will Travel, as the well-educated but tough gun-for-hire, Paladin. For more on Dehner’s background, of which I found numerous items of interest, click on the Have Gun—Will Travel link above. John Dehner died in 1992 of complications from emphysema and diabetes. 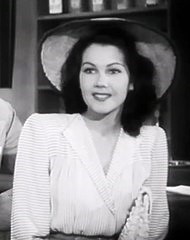 Noted radio scripter Antony Ellis (1920-1967) was born English but became a naturalized American citizen. He capped his unbridled fascination for the American Old West by writing each episode of Frontier Gentleman. They were noted for their historical accuracy and depth of character development within the half-hour time restriction. He and series star John Dehner were good friends in real life. Antony was married to Georgia Ellis (1917-1988), who starred as Kitty in radio’s Gunsmoke.

Future award-winning film composer Jerry Goldsmith (1929-2004) would be responsible for the show’s musical theme. Of his many film scores, a few of the more recognizable would include Alien (1970), L. A. Confidential (1997), Patton (1970), The Sand Pebbles (1966), The Wind and the Lion (1975), Chinatown (1974), Planet of the Apes (1968), Logan’s Run (1976), Star Trek: The Motion Picture (1979), and The Lost World: Jurassic Park (1997). From his wiki page, “Over the course of his career, Goldsmith received 18 total Academy Award nominations, making him one of the most nominated composers in the history of the Awards. Despite this, Goldsmith won only one Oscar, his score for The Omen (1976). This makes Goldsmith the most nominated composer to have won an Oscar only on one occasion.” Jerry Goldsmith died of colon cancer in 2004.

In this episode, a beautiful woman comes to town and sets up a complete gambling operation, all legally, and is the talk of the town, some good and some definitely not, for there are claims she is cheating some of the town’s men folk out of their hard-earned money. Denying the accusations, she is befriended by Kendall through whom we learn her story—or most of it. When one of the men who has patronized her gambling establishment remembers who she really was during the Civil War the drama intensifies, but not after Kendall is able to tell her whole story in perspective and the listening audience is implicitly charged with deciding for themselves how they would view such a person if they were in the same situation in real life. Such is the emphasis on this different kind of western, told with insight, drama, and yes, a measure of violence, as we are told the story of “Madame Belle Siddons, Confederate Spy.” Give Frontier Gentleman a try and see what you think.

(The linked CD at the top includes this episode, aka “The Gambling Lady.”)

{Frontier Gentleman was broadcast at 12:30 PM on Sunday afternoons, so after church and lunch the neighborhood gang met at the nearby newsstand in search of more western fare. Unfortunately, most western pulps died quicker than the extinction of the dinosaurs. In 1953 there were a few westerns scattered about on newsstands here and there, but by 1958 they were almost non-existent, and those that were had not long to live. Famous Western (1937-60) switched from a quarterly to a bi-monthly schedule in 1948 and was able to maintain it through 1958 (with the exception of 1957). Alas, though it still held a small but devoted core readership, it was not enough and  with only 2 issues into 1960 it folded, the May issue signaling its final roundup. Western Action (1936-60) loosely followed the same problems as Famous Western, in that it, too, maintained a fairly regular bi-monthly schedule for a goodly number of years after experiencing a hit and miss schedule from 1936-1944. In 1958 it was on a reliable bi-monthly schedule but would breathe its last in April of 1960, one month before Famous Western saw its end. Infinity Science Fiction (1955-58), edited by Larry Shaw, saw only 20 issues during its brief lifespan but nevertheless managed to prove itself as a magazine worthy of a measure of respect. It’s debut issue saw the publication of Arthur C. Clarke’s now famous short story “The Star,” which would win a Hugo Award for Best Short Story. In issue #2 we would see Harlan Ellison’s first published story “Glowworm,” and during the course of its remaining 18 issues it would showcase fiction by prominent names (or those who were in the process of making names for themselves) such as Robert Silverberg, William Tenn, Robert Bloch, James Blish, Isaac Asimov, Damon Knight, Lester del Rey, Robert F. Young, A. Bertram Chandler, Clifford D. Simak and a number of others. Quite a stellar selection of top-notch tale spinners to say the least. Infinity SF offered 7 issues in 1958.} 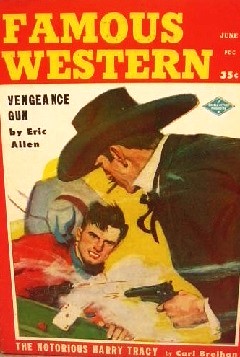 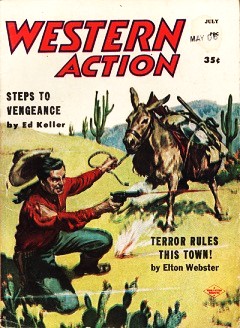 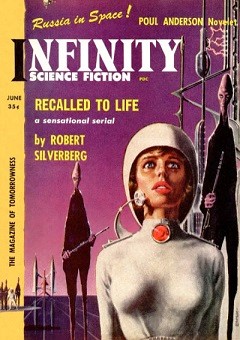