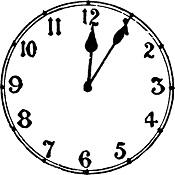 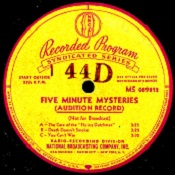 [Editor’s Note: Suffering from a bout of the flu, I asked Golden Age of Radio buff and Asimov’s author Pete Wood if he would fill in this week. Pete graciously agreed, selecting and doing the write-ups on the show itself and the trio of episodes below, and from a program we had not previously showcased. I wish to thank Pete for his willingness to step in at the last minute, and for the quick turnaround when time was of the essence. His forthcoming story, “Never the Twain Shall Meet,” will appear in the May/June issue of Asimov’s.]

NBC syndicated Five Minute Mysteries in the late 1940s.* Exact air dates are not known, because air times depended on local stations. Air dates can only be loosely estimated by the dates stamped on the original records. NBC sold the stations vinyl recordings containing multiple episodes which could be used as filler programming, often after sporting events.

The episodes had a simple format. Organ music for about half a minute. Announcer introduces the show. A brief radio play, lasting about two minutes. A detective is introduced to a crime scene. The villain seems to have gotten away with the perfect crime. Then, the radio sleuth announces that he has figured things out. Cue more organ music as the radio listener is given a minute to figure things out.

Cut back to the radio sleuth who announces the solution. The program was not unlike Donald Sobol’s Encyclopedia Brown books or Sobol’s series for adults—Two Minute Mysteries which had the same puzzles with no framing device.

Some local stations played commercials instead of organ music during the two organ breaks. This made the syndicated program especially appealing. At times these local advertisers offered prizes to the first caller to solve the mystery.

In total NBC produced 296 episodes. Alas, most of the information about the episodes has been lost, such as the names of the actors and writers. However, several scripts–including those for today’s three episodes–still exist and are available online. And, well over a hundred episodes can be accessed on YouTube and other sites.

Five Minute Mysteries was one of a series of short mystery programs that included Ellery Queen’s Minute Mystery and Word Detective with Basil Rathbone.

The three episodes below have “air dates” of April 20, 1948. Again, this is only an estimate based on the date the episodes were transcribed to disc, and then distributed to radio stations across the country for syndication, and then final airing at the station’s discretion. It will have to suffice for an air date.

“My Pal Patsy” opens in “Green’s Gap, a small town in the Southern cavern district” Doctor Melville answers his phone. A voice tells him “Doctor, doctor, there’s been an accident out at Echo Cavern.” Doctor Melville rushes to the scene and discovers that a man has died tragically in the caves where many men have perished over the years. But, Doctor Melville wasn’t born yesterday.

“Death Calls at Dinner” opens with “an anniversary party is going on at the Brown household around the corner.” During dessert, Sam Brown, the host, dies of an apparent heart attack. His wife had prepared all of the food. Sergeant Barker of the Homicide Division arrives and after interviewing the various players proclaims that he’s found the one flaw in the almost “perfect murder.” Can you deduce what happened?

In “Murder of Mrs. Brooks” Jim and Alice discover that Mrs. Brooks, Jim’s wife, has been murdered. Before she died she wrote the initials DOC on the floor in nail polish. Jim’s nickname is Doc. The police arrive on the scene and soon proclaim, “Well, you both will be happy to know our little murder is solved.” What did the police observe?

The great thing about Five Minute Mysteries is that if one tanks, you haven’t wasted much time. It’s perfect for someone with a short attention span and can easily be binge listened.

*An interesting historical relationshp exists between General Electric, RCA, and NBC. GE created RCA in 1919 as a fully owned subsidiary. In 1926 RCA created NBC, the first national radio network in the early twenties. RCA divided its radio networks into NBC red (sponsored entertainment) and NBC blue (non-sponsored news and cultural programming) in 1927. In 1932 GE had to divest itself of RCA due to anti-trust laws. In 1945 RCA had to sell off the blue network due, again, to anti-trust laws. It became ABC.

{Ordered by his mother to stay home until he was over his cold, one of the neighborhood gang passed his magazine list–through his mother–to one of his buddies for their weekly trip to the corner newsstand. Astounding SF (1930-present, now Analog) topped almost everyne’s list and it was fortunate that enough copies remained for everyone. It was a monthly in 1948. Famous Fantastic Mysteries (1939-53) focused on classic reprints and helped many a young reader fill in genre gaps from a time before there were “official” genre magazines at all. In 1948 it was a bi-monthly. Weird Tales (1923-54) was always a sure bet, and this issue’s spooky cover art coupled with Ray Bradbury’s name at the very top ensured a quick sale. It too was a bi-monthly in 1948.} 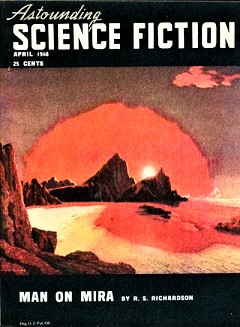 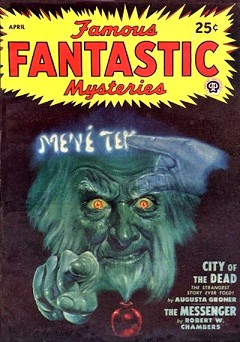 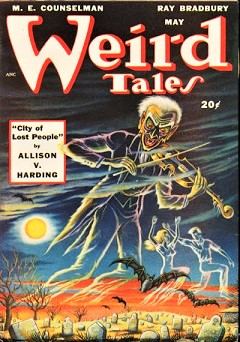