Favorite Story (1946-49) aired “The Man Who Made Gold” (aka “The Golden Ingot”) on November 18, 1947. The idea behind this popular show was to invite personalities of the time–authors, musicians, movie stars, sports celebrities, and others with a high profile–to offer their favorite stories to be dramatized on radio. We’ve run more than a dozen to date, though the last one was in December of 2016. Thus, for newcomers to the program or to refresh the memories of those familiar with the show, a reprise of the background of the show is in order. 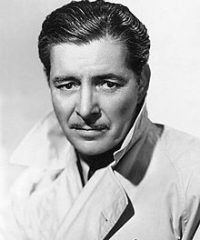 Favorite Story was hosted by the suave, debonair, early film star Ronald Colman (1891-1958), who on occasion would star in these well-produced adaptations of classic stories. Of interest to genre fans is Colman’s starring role in the 1937 film adaptation of James Hilton’s 1933 novel Lost Horizon. He was signed to play the lead in MGM’s forthcoming SF film Village of the Damned (1960), but died before production began. The film was picked up by a British company and starred George Sanders in the lead role. (Coincidentally, Sanders would marry Colman’s widow, Benita Hume.) Colman was nominated for three Best Actor Oscars and would win the Oscar for 1947’s A Double Life. He was honored with not one, but two stars on the Hollywood Walk of Fame, one for motion pictures and one for television.

“The Man Who Made Gold” was a retitling of “The Golden Ingot,” a short story by Fitz-James O’Brien (1826-1862, sketch top right). O’Brien was an early SF/supernatural/horror writer who, among other genre stories, is perhaps most well known in SF circles as the author of the 1858 Atlantic Monthly story “The Diamond Lens.” Horror writer H. P. Lovecraft is known to have been an admirer of the story. Among a few of O’Brien’s other notable stories, his wikipedia entry says that “”The Wonder Smith” is an early predecessor of robot rebellion, where toys possessed by evil spirits are transformed into living automata who turn against their creators.” Also, the late SF historian Sam Moskowitz notes that “His [O’Brien’s] 1858 short story “From Hand to Mouth” has been referred to as “the single most striking example of surrealistic fiction to pre-date Alice in Wonderland.” And finally, “What Was It? A Mystery” (1859) is one of the earliest known examples of invisibility in fiction.”

“The Man Who Made Gold” is the story of an alchemist, his daughter, and a doctor. The story asks not only how far one should go in support of the dreams of a loved one, but when to let go and at what price if allowed to continue. Even with the best of intentions, outcomes and consequences sometimes do not end up for the best and can prove to inflict more cruelty than love. Listen to this sad story to the end, if you can. It was the favorite story of, and was selected by the Danish-American opera tenor popular in the 1940s, Lauritz Melchior (1890-1973). The story touched a chord in enough people that on May 9, 1952 it aired as an episode of the early TV program Tales of Tomorrow starring Gene Lockhart (father of June Lockhart {1925-    }, familiar to fans of TV’s Lassie, Lost in Space, and many others).

During the Civil War the practice of paying someone to take one’s place if called to war was allowed. Since O’Brien expressed his desire to see the war up close he asked to be sent to the front after accepting another writer’s payment, thus becoming his legal replacement in 1861. Alas, O’Brien got his wish. Ere long, in February of 1862 he was badly wounded, succumbing to his injury and dying of tetanus in April.

Please forgive the less than perfect audio quality of this presentation, but unless digitally remastered (at some expense) this is sometimes all we Golden Age of Radio fans have to remind us of the good old days of radio, when the medium was indeed the theater of the mind.

{It was a Tuesday on November 18th in 1947 when this episode aired. It was the run up to the Thanksgiving school holiday and while a weekday did not deter the neighborhood gang from hitting the corner newsstand after school the next day. Black Mask (1920-51) would come to be regarded as the best of the detective pulps, and with good reason, for it would publish some of the greatest crime/mystery authors, both stories and (serialized) novels in the history of the genre (including Dashiell Hammett’s The Maltese Falcon). It was a bi-monthly in 1947. Doc Savage (1933-49) and his motley crew of crime fighters (each with a different specialty), were still confronting local crime as well as global evil and sinister villains, both with their minds and with necessary force in 1947. Doc’s magazine was created in 1933 to capitalize on another Street & Smith pulp, The Shadow. Doc was characterized as “a doctor, scientist, adventurer, detective, and polymath,” and the late, great Marvel Comics editor Stan Lee credited Doc as “the forerunner of modern superheroes.” Doc Savage published 7 issues in 1947, beginning its bi-monthly run with the March/April issue. Famous Fantastic Mysteries (1939-53) filled a much-needed gap by publishing fantasy and scientific classics. Not only was it noted for the quality of the stories, but for the fact that it was edited by a woman (Mary Gnaedinger) and its leading illustrator was the legendary Virgil Finlay. It was a bi-monthly in 1947.} 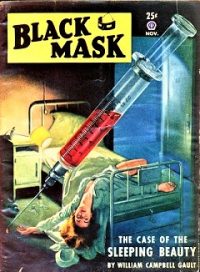 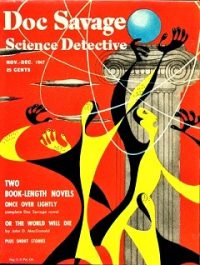 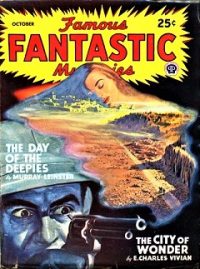