Favorite Story (1947-49) aired H. G. Wells’s “The Time Machine” on May 28, 1949 as its 89th episode. Wells (1866-1946) saw The Time Machine published first in 1895 (1st ed. cover at left). We all know the story of the inventor–named by the narrator of the story as the “time traveler,” and his voyage into the far future, ending his journey forward through time in the year 802,701 A. D. and witnessing the final throes of the planet. It is adventures along the way–his various stops into the future–that form the bulk of the story, most famously his far future stop in the time of the childlike Eloi and the monstrous, flesh-eating Morlocks.

Rod Taylor (1930-2015) starred in the classic 1960 George Pal film, and while there have been numerous others made since then, none have quite captured the ambience and flavor of the 1960 version. This radio version, airing some eleven years before the iconic film does the best it can for the half hour it was given. We have the usual introductory scenes, time is spent with the Eloi (and Weena) and the Morlocks, and we are given the scene near the end of time on Earth. Highly condensed, it does capture the spirit and moralizing of Wells’s orignal text and much of the sentiment of the 1960 film. It is definitely worth a listen, as the debonair screen actor and host of Favorite Story, Ronald Colman (photo at right), does another superb job.

The concept behind Favorite Story is that a famous celebrity of the time in any field whatsoever would choose a story as their favorite and see it produced. “The Time Machine’ was the favorite story of famous bandleader and radio personality of the 1930s and ’40s, Kay Kyser (1905-1985) who, unfortunately, died on his 85th birthday.

Enjoy this fine half hour adaptation of H.G. Wells’s classic tale of a scientist and inventor who believed in the fourth dimension and decides to prove his theories by building “The Time Machine.”

{After being thrilled at listening to “The Time Machine,” our inspired neighborhood gang couldn’t wait until the weekend and the trip to the corner drugstore and the pulp magazine section, where they would eagerly snap up some of their favorite reading, examples of which are shown below.} 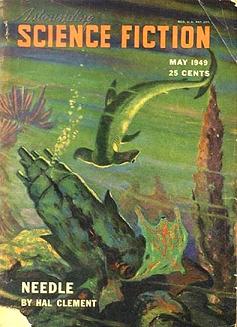 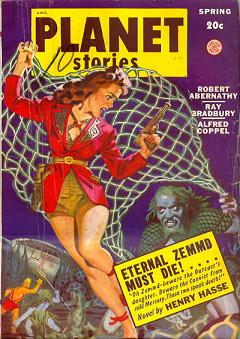 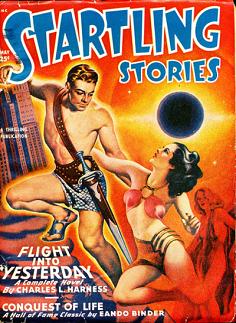