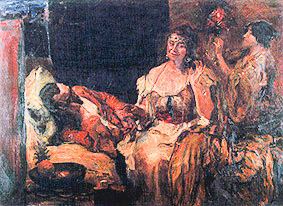 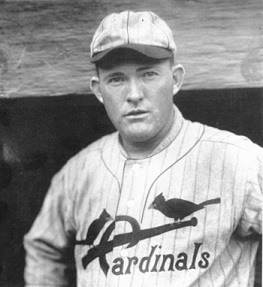 Favorite Story (1946-49) aired “Aladdin and the Wonderful Lamp” on October 30, 1948. The idea behind this popular show was to invite personalities of the time–authors, musicians, movie stars, sports celebrities, and others with a high profile–to offer their favorite stories to be dramatized on radio. We’ve run more than a dozen to date, but this one comes from an unlikely sports figure, none other than baseball legend Rogers Hornsby (1896-1963) whose lifteime batting average of .358 is second only to that of Ty Cobb’s at .367. Neither man was particularly well liked by teammates, yet Hornsby’s career as both player and manager would last well over 20 years. Hornsby wasn’t well educated or well read, yet chose for his favorite story one of the most famous tales from One Thousand and One Nights, the classic work featuring Queen Consort Scheherazade as she tells nightly stories to her King, Shahryrar, who had found his first wife to be unfaithful. To insure that no future wife would be unfaithful, he married a new virgin each day to be his queen, then beheaded them each night. By the time the grand vizier’s daughter, Scheherazade, became the king’s new bride, he had beheaded 1,000 wives. To forestall her impending death, Scheherazade began telling the king a most fascinating tale, but near dawn told the king she would not be able to finish the tale because of his edict to slay each new bride after but a single night. So enthralled with the yet unfinished story, the king allowed Scheherazade to live one more night so he could learn the end of the story. Finishing her tale the next night, she began a new one and like the first tale it was unfinished come dawn. The king let her live one more day, and so on, until she had told 1,000 tales in 1,001 nights. By then the king had fallen in love with Scheherazade and made her his queen. Several of her tales have proved timeless, including that of “Ali Baba and the Forty Thieves,” “The Seven Voyages of Sinbad the Sailor,” and of course “Aladdin and the Wonderful Lamp” (aka “Aladdin’s Wonderful Lamp”). It must be noted, however, that while these stories have come to be associated with the original Arabic version of the stories compiled as One Thousand and One Nights, they were added much later by European translators.

Favorite Story was hosted by the suave, debonair, early film star Ronald Colman (1891-1958), who on occasion would star in these well-produced adaptations of classic stories. Of interest to genre fans is Colman’s starring role in the 1937 film adaptation of James Hilton’s 1933 novel Lost Horizon. He was signed to play the lead in MGM’s forthcoming SF film Village of the Damned (1960), but died before production began. The film was picked up by a British company and starred George Sanders in the lead role. (Coincidentally, Sanders would marry Colman’s widow, Benita Hume.) Colman was nominated for three Best Actor Oscars and would win the Oscar for 1947’s A Double Life. He was honored with not one, but two stars on the Hollywood Walk of Fame, one for motion pictures and one for television.

Enjoy now this 1948 radio adaptation of “Aladdin and the Wonderful Lamp” enhanced by the wonderful Rimsky-Korsakov score which he composed in the 1880s specifically for Scheherazade.

{Listening to this story of Aladdin’s Lamp the night before Halloween served to excite the imaginations of the neighborhood gang, spurring them to the corner newsstand the next day for pre-Halloween treats of their own choosing. Astounding held to its usual monthly schedule, and this issue promised some great rewards, for it featured the first of four installments of The Players of Null-A, one of the novels in what would become the classic Null-A series by A. E. van Vogt. fantastic Adventures had just gone monthly in 1948 from its former erratic schedule, and Startling Stories was a bi-monthly, with this issue showcasing what would become one of Fredric Brown’s most popular and critically acclaimed stories “What Mad Universe” (novel version published a year later in October 1949). A good month for SF magazine lovers.} 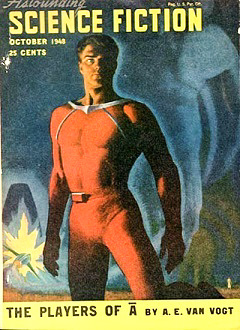 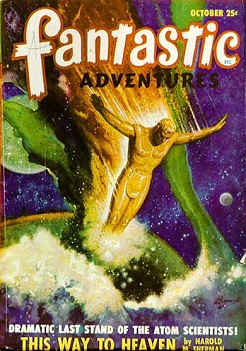 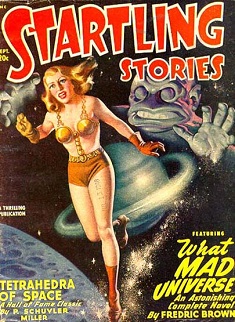