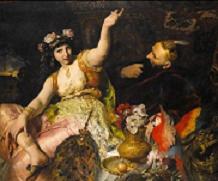 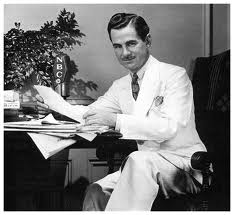 Favorite Story (1946-49) aired “The Arabian Nights” on November 15, 1947. The collected stories are from the seductive raconteur Sheherazade’s One Thousand and One Nights (aka in various English versions as The Arabian Nights, from its first translation in 1706), and come to us in the West primarily through Sir Richard Burton’s now accepted 1885 translation.

This particular dramatization relates one of the opening tales, of how King Shahryar of Samarkand issued an edict due to the infidelity of his wife, that each future wife would be put to death on the stroke of midnight of their wedding day, insuring no further infidelity. But then comes a clever new wife who so enthralls the King with her intriguing tales that he allows her to live…as long as her nightly stories keep him wanting more. Thus the title of One Thousand and One Nights and the singular story that follows.

The concept for Favorite Story is a simple one; well known personalities of the time, whether they come from the arts, sciences, sports, literature, or any other field, choose one of their “favorite stories” for dramatization. The series is hosted by the debonair English actor Ronald Colman. “The Arabian Nights” was chosen by Lowell Thomas (1892-1981, photo top right), a writer, documentarian, popular radio and tv news personality, and world traveler. During World War I Thomas met T. E. Lawrence, a captain in the British Army in Jerusalem and followed his exploits, taking notes and film footage of the people and military campaign. Returning to America, Thomas went on tour with his film-slide documentary and lectures on Lawrence of Arabia, and is credited with inspiring the famous 1962 David Lien film. In 1976, President Gerald Ford awarded Thomas the Presidential Medal of Freedom. He has two stars on the Hollywood Walk of Fame and was inducted into the National Radio Hall of Fame in 1989. Thomas was a longtime member of the Explorer’s Club, and from 1980 forward the club has bestowed the Lowell Thomas Award to “honor men and women who have distinguished themselves in the field of exploration.” Among the recipients are Isaac Asimov and Buzz Aldrin.