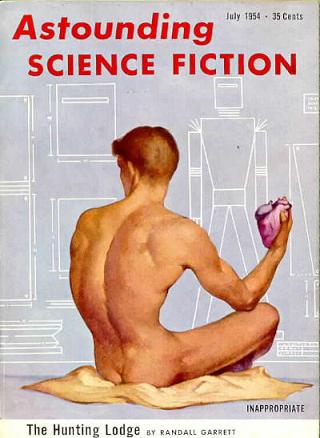 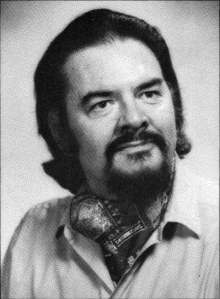 “The Trouble with Robots” is based on a novelette by Randall Garrett (1927-1987). It appeared originally as “The Hunting Lodge” in the July 1954 issue of John W. Campbell’s Astounding Science Fiction (now Analog). “The Trouble with Robots” aired on the short-lived radio program Exploring Tomorrow in 1958, which ran on a twice-a-week basis from late 1957 through mid-1958. Most of Exploring Tomorrow‘s 100+ episodes are considered “lost,” and those several dozen that do exist are for the most part in poor condition. Aside from the stories themselves, the primary attraction of these radio plays is due to the fact that the legendary John W. Compbell, Jr. hosts each episode, and comments on them during breaks. It is a wonderfully historic footnote to be able to hear Campbell himself, such was his influence on the science fiction world for over 30 years.

The original “The Hunting Lodge” has a U.N. assassin visiting the eponymous lodge of the title to visit a Senator, whose crooked ambitions are aimed at securing his own longevity treatments. The focus falls on his computerized lodge, which is controlled and defended by one large robot brain. Of course, amidst the adventure and intrigue of the assassination and the attempted getaway, the “Trouble with Robots” is made abundantly clear.

The radio play changes the basic setup to that of a representative of the U.N. (not an assassin) off to Transylvania to conduct a rare interview with the reclusive Transylvanian prime minister upon the new country’s admittance to the U.N. Rather than a lodge, it is a large castle being guarded and maintained by a robot brain, but with much the same progression of action as the original story from then on out.

While I much prefer the original story, it is Campbell’s warnings about a robot controlled government (defense, power grids, cameras everywhere, and the inability of a robot to understand human nuance) rather than a government controlled by men that make this thematic emphasis interesting.

Randall Garrett was one of John W. Campbell’s favorite, and most prolific, writers for Astounding (especially from around 1945-1955), but now is pretty much an unknown name to newer generations of SF readers. Close friends with Robert Silverberg, he tutored Silverberg as he was starting to write and they later became collaborators on several novels. “The Hunting Lodge” was reprinted in Isaac Asimov Presents the Great SF Stories: 16 (1954) [DAW, May 1987]. In his introduction to the story, co-editor of the series (the late) Martin H. Greenberg ends with: “The Hunting Lodge” shows Garrett at his intricate, fascinating best.” And in his own remarks, Asimov concludes with: “I last saw him in December 1978, in San Jose, California, where I had traveled by train (!) to give a talk. It was not long after that that he was struck by a bad case of meningitis. He is still alive but he is no longer Randall, alas.” The “no longer Randall, alas” refers to the fact that in 1979, due to his contracting meningitis, Garrett fell into a coma from which he never recovered. He lay comatose for eight years until his death on December 31, 1987 at the age of 60.

(For trivia buffs, note that not only did Garrett’s “The Hunting Lodge” get the cover for the July 1951 Astounding, but if you look closely at the lower right corner you will find the word “inappropriate.” No doubt the censors at the time felt a naked man on the cover–even viewed from behind–might be a bit much for younger readers. The photo of Randall Garrett is by Will Hart and was taken at the 1978 World Science Fiction convention in Phoenix, Arizona.)

Listen now to this radio adaptation of “The Trouble with Robots,” though for an even greater experience of the talent of Randall Garrett read “The Hunting Lodge.”