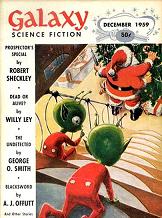 Exploring Tomorrow (1957-58) aired “Made in Avak” on March 12, 1958. Also known as “Fair Fight,” this Philip K. Dick story appeared in print form almost two years later in the December 1959 issue of Galaxy with the title “War Game,” thus this radio appearance predates the print version by almost two years and is not identical in certain non-critical areas (i.e. the basic storyline is the same). A number of Exploring Tomorrow‘s episodes were written specifically for the show, so while perhaps unusual it is not surprising that “Made in Avak” was slightly rewritten and retitled for its print debut in Galaxy.

At its core, “Made in Avak” is the story of a planet, defeated in war in the past, that now desires only to turn itself into a peaceful world, one devoting its talent and resources into commercial enterprises, marketing its wares throughout the galaxy. One such product is a children’s game with the name of Enterprise (much like Monopoly, and given the name of Syndrome in the print version). It appears harmless and quite the educational tool at first, but what mindset, what economic philosophy is it really inculcating in the minds of Earth children and with what long-term consequences? Are there more subtle ways of waging war than with a physcial armory of destructive weapons? As always, legendary Astounding/Analog editor John W. Campbell, Jr. narrates this chilling episode with its all-too-real implications. From the Food for Thought Dept.: What country following its utter defeat after World War II became a peaceful, economic powerhouse, when, as part of its terms of surrender, it was prohibited from re-forming its own armed forces?