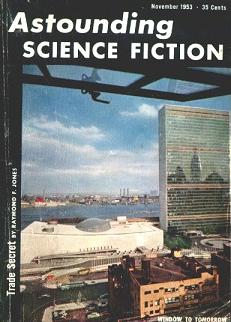 Our most recent Exploring Tomorrow episode (Poul Anderson’s “Genius”) proved so popular (no doubt due to being able to hear the actual voice of John W. Campbell) we thought we’d showcase another this week. John W. Campbell, Jr. hosts and offers commentary as usual, and the story is Raymond E. Banks’ “The Happiness Effect” from the November 1953 issue of Astounding Science Fiction (ASF), now known solely as Analog since the July 1960 issue (both titles were used for several months prior to the complete name switch in July). It aired on February 5, 1958 as ET‘s 9th episode.

When doing research on these weekly OTR episodes I consult a number of sources if an author is unknown to me, or just to nail down the original publication dates, the author’s birth and death dates, and any other interesting information I run across. In the case of Raymond E. Banks (I couldn’t locate a photo), it seems that Wikipedia lists his dates as 1918-1974. But the Encyclopedia of Science Fiction has them as 1918-1996. Recalling Banks’ name from Isaac Asimov Presents the Great SF Stories series, a quick search found one of his stories included in volume 17, showcasing stories from 1955. Volume 17 appeared in January of 1988. Before the story’s introductory notes by co-editors Martin H. Greenberg and Isaac Asimov we see that Banks is still alive, for his dates are given as (1918–     ). And on the copyrights page we see that he renewed the copyright to his story, “The Short Ones,” in 1983. So it would appear that the Wikipedia listing is grossly in error, and rather than passing on in 1974, Banks lived another 22 years and passed away in 1996.

Raymond E. Banks began publishing SF in the magazines in 1953, and would go on to sell about 33 or so through 1964, and only three from 1966-70. “The Happiness Effect” was his third story to see print. As you will hear from Campbell’s introduction and commentary between scenes, it is the nature of happiness that is the concern here. What makes a man truly happy, and can happiness be forced upon him by law–and in this case by surgery via “brain-writing”? And what if one doesn’t care to have his brain altered by the government and rebels–finding his own individual happiness in “unapproved” ways, perhaps as a painter? Interesting also is the fact that Campbell, in his closing statement, brings up the Declaration of Independence to emphasize an important distinction in one of its statements. Which one? Listen now to Raymond E. Banks’ “The Happiness Effect” to discover the answer.

(A note about the cover–enlarged below:  Sam Andre’s photo explains John W. Campbell’s editorial “Window to Tomorrow.” Of note is that the view is from the offices of Astounding Science Fiction as it looks out over New York.) 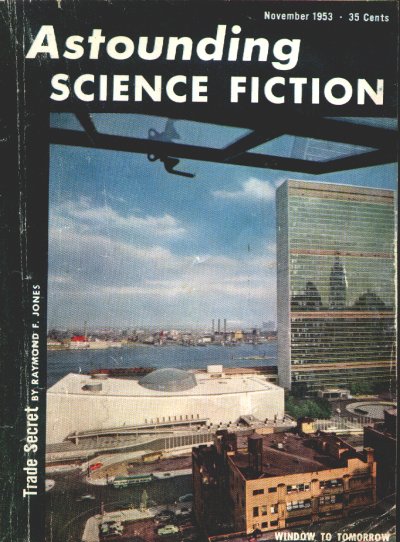