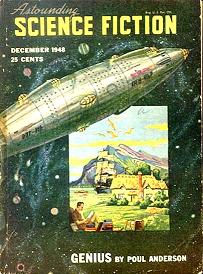 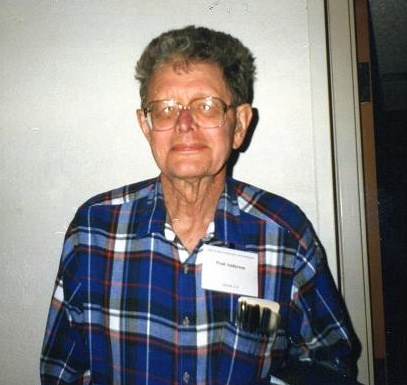 Exploring Tomorrow (1957-58)  aired Poul Anderson’s novelette “Genius” (retitled for radio as “Planet of Geniuses”) in 1958. Exploring Tomorrow, much to the delight of science fiction fans, was introduced and narrated by none other than the legendary editor of Astounding Science Fiction himself, John W. Campbell, Jr., which makes each episode a rare treat today, 41 years after his death and more than half a century since these shows originally aired. Note that both Exploring Tomorrow and X Minus One (1955-58) were cancelled in 1958, signaling the end of an era for SF on radio.

Poul Anderson (1926-2001) saw his first stand alone piece of short fiction published in the December 1948 issue of Campbell’s Astounding Science Fiction (ASF). “Genius” is that story and was awarded pride of place as the featured cover story. The premise of “Genius” begins when scientists decide to perform a sociological experiment on an uninhabited colony world. They seed the planet (in this far future) with “genius” stock, wiping the memories of the colonists of their origins and of all technological knowledge, in order to see how they might develop. Thousands of years later, an investigator from the Galactic Imperial Armed Forces is sent to check on them. Have they died out? Are they struggling just to survive? Have they perhaps created a technological society in a mere few thousand years–something it took humans on Earth an inestimably longer amount of time to do? Along the way, Anderson explores the meaning of the word genius and what its positive and negative aspects really are. And never fear, Anderson tosses in a few insightful twists and turns (which Campbell amplifies upon in his between-scenes narrations) making “Genius” a thought-provoking story.

“Genius” was immediately snapped up for The Best Science Fiction Stories: 1949, edited by the pioneers of all Best Of collections, E. F. Bleiler and Ted Dikty. 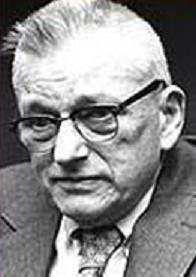