Escape (1947-1954) aired “Serenade for a Cobra” on June 16, 1950 as the show’s 115th episode. Not surprisingly, we have aired many episodes (30+) of this top-shelf program over the past 12 years, the last two being in February of this year and August of 2020. A spinoff and sister show of the highly popular radio program Suspense (1942-62), Escape produced (according to one source) 251 episodes of which 241 were unique stories, plots, or scripts. Escape concentrated on adventure tales, some with an SF/F theme, though the straight adventure tale set in exotic locales was its meat and potatoes. Escape soon established itself with an even more focused approach to action and exotic adventure, dramatizing literary classics (from such as Rudyard Kipling, Sir Arthur Conan Doyle, Edgar Allan Poe, Ambrose Bierce, Nelson Bond, Ray Bradbury, Eric Ambler, Jack London and others) while at the same time treating its audience to many brand new tales, a fair number of which have become radio classics. In fact, some of Escape‘s original shows were so well written, acted, and produced they were later reincarnated for episodes of Suspense.

This episode of Escape takes us to Southeast Asia, namely India, following WWII. An ex-Army pilot is bemoaning his fate while looking desperately for work, hoping a nice “deal” will come his way requiring his services, a deal that will make him a lot of money. Something does come his way, but not the usual flying furs out of Mongolia to the more civilized world. He agrees to a scheme that is not 100% legal,  but he has no idea of the adventure upon which he is about to embark. Listen now and journey along with our anything-for-a-buck pilot as he takes the plane ride of his life—an exotic adventure which he finds all too soon he cannot escape!

{This episode of Escape aired on a Friday evening in the middle of June, 1950. Summer vacation was in full swing for the neighborhood gang and where else to find them on a Saturday morning but at their nearby newsstand, looking for stories of adventure wherever they could find them. Action Stories (1921-50) was one of the rare multi-genre pulps though it did seem to publish more western content than other genres. That it lasted 30 years was testament to its broad approach. A quarterly in 1950, the issue below happened to be its last. Jungle Stories (1938-54) was a favorite when any one of the gang was in the mood for a good Ki-Gor page-turner. Like Action Stories it was a quarterly in 1950. Other Worlds (1949-53) was yet another of editor Raymond Palmer’s ubiquitous publishing endeavors, this one lasting longer than most. It was the fictional counterpart to Palmer’s non-fiction magazine Fate, which specialized in UFOs and paranormal phenomena. It was a bi-monthly in 1950.} 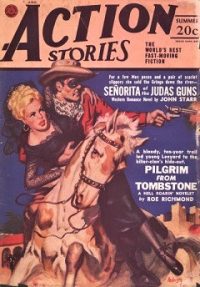 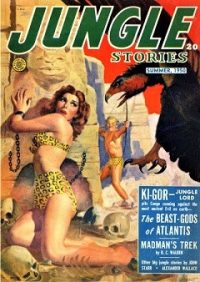 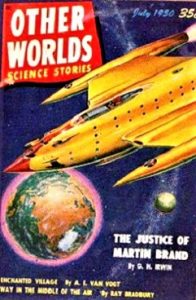