Escape (1947-54) aired “Wild Jack Rhett” on December 17, 1950 as the 150th of its approximately (depending on how historians count) 235 unique broadcasts. A spinoff and sister show of the highly popular radio program Suspense (1942-62), Escape produced (according to one source) 251 episodes of which 241 were unique stories, plots, or scripts (the remaining 10 being rebroadcasts of earlier shows and not different versions of previous episodes). Escape concentrated on adventure tales, some with an SF/F theme, though the straight adventure tale set in exotic locales was its meat and potatoes. While strangely not consistently supported by its host network CBS, who rarely gave advance notice of upcoming program titles and moved the show to different times and days willy-nilly over its 7-year run, the show found a faithful audience, and continued to produce well-written scripts with many of the finest actors in radio. 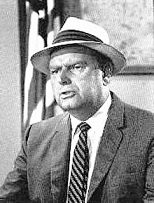 John Dehner (1915-1992, photo top right) stars in this episode, and Parley Baer (1914-2002, photo at right) narrates. Baer is best known to tv audiences as Mayberry Mayor Stoner on The Andy Griffith Show, but began his career in radio, on one of which shows, radio’s Gunsmoke, he played the role of Matt Dillon’s unofficial deputy Chester. That said, one of his earliest and most notable roles was as this episode’s narrator.

John Dehner is one of my favorite radio and TV actors. He began as an illustrator for Walt Disney Studios, where he worked on such iconic animated features as Bambi and Fantasia in the early 1940s. Among his other talents (he spoke four languages), he worked as a DJ, as part of his military service in WWII was a publicist for George Patton, and for a time was as a professional pianist. His radio, film, and tv work spanned almost 50 years during which he appeared in over 260 roles among the three media (including episodes of The Twilight Zone). Though appearing in many radio shows (Escape–where he wrote some 50+ episodes, Gunsmoke, The Whistler, and Philip Marlowe just to name a few), including as the star of the western Frontier Gentleman (1958), he has the distinction of playing Paladin, the star of radio’s Have Gun–Will Travel (debut date 1958), the only radio show to appear after its television show had aired (the tv version starring Richard Boone ran from 1957-1963). John Dehner was one of a kind, and thankfully he left a grand legacy for those listening to radio or watching any number of his dozens and dozens of tv and film appearances.

In “Wild Jack Rhett” Dehner plays a famous and feared hired gun who has been called in to save a small western town where violence reigns–and sheriff’s don’t last long. Not the most original theme for an Old West drama, but this script attempts to get inside the head of the hired gun, what makes him do what he does, and what personal code of ethics or honor he may embrace–and the consequences. So it goes beyond the fireworks, though they are here. But it will be up to you to learn the fate of “Wild Jack Rhett” by listening as Parley Baer narrates the story of the eponymous character, played admirably by John Dehner.

As an end note, and for those who might wonder why I chose a western for this week’s Old Time Radio episode, I offer that while the vast majority showcased here over the past 8 years (some 400+ shows) have been in the SF/F/H genres, there are only so many (especially of the pure SF stripe) available, and well over 100 have been made available for your listening pleasure. I have also dipped into the detective/PI genre from time to time because many SF/F/H stories over the years have used plot devices, situations, and settings from the detective/PI milieu and have adapted them to the SF/F/H genres. So it is with the western genre, which has seen a more pronounced resurgence over the past decade or so as SF/F/H writers seek new territory and settings in which to tell their tales. Western settings and themes have been blended and mixed in clever, entertaining stories as the SF, Fantasy, and Horror fields all have borrowed from the Western, for many of its themes are universal and are merely retold, modified or rejiggered in inspired formats to fit the time and place of the storyteller’s choosing. Alfred Bester famously melded the detective story with SF for his classic 1952 novel The Demolished Man, breaking new ground and winning the first ever Hugo Award in 1953 for his mix of genres. And how many times have we heard it said that Battlestar Galactica or Star Wars is naught but SF iterations of the western? Below are four fairly recent examples of how SF, Fantasy, and Horror have all looked back to the American Old West for their inspiration in order to tell entertaining stories for readers always looking for something different. 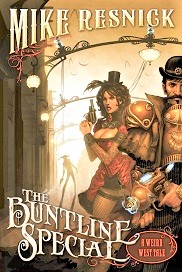 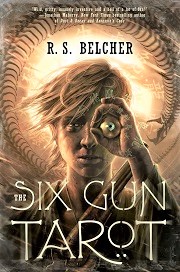 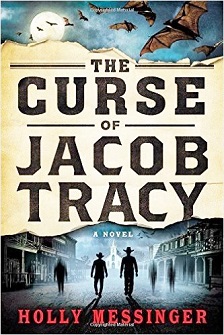 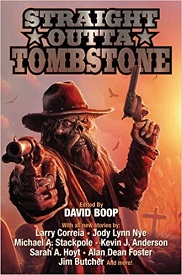 {The week before Christmas of 1950 saw the neighborhood gang giving themelves early presents after a cold walk to the corner newsstand where they could choose some of their favorite reading, gift-wrapped in colorful pulp covers. As always, Astounding SF (1930-present, now Analog) was a no-brainer, its monthly schedule reminding the faithful on a regular basis that they dare not miss an issue. And this issue was no exception, for it featured one of the four stories that would go on to make up James Blish’s 1955 novel Earthman, Come Home. The story here, “Bindlestiff,” was the second to be published in Astounding, following “Okie” in the April 1950 issue. The remaining pair of stories would appear in 1952 and 1953, the latter also in Astounding. Earthman, Come Home was one of four novels making up one of Blish’s most renowned achievements, the Cities in Flight tetralogy.  Not in published order but internal order, this famous space opera series was comprised of They Shall Have Stars (1957), A Life for the Stars (1962), Earthman, Come Home (1955), and The Triumph of Time (1958). It was in these novels that Blish introduced the concept of entire cities (via anti-gravity generators called “spindizzies”), that set Man free to wander the universe. The Cities in Flight series is truly one of the not-to-be-missed grand space opera works in SF, and the second published story of them all, chronologically, was found in the December 1950 issue of Astounding SF. Galaxy (1950-80) began as a monthly in October of 1950, the issue below being but its third, though it was attracting quality talent from its inception, witness the story by James H. Schmitz in the December issue. And could it get any better for our stalwart young pulpsters than a new Leigh Brackett novelette in the December issue of Thrilling Wonder Stories (1936-55)? TWS was a bi-monthly in 1950, and for those desirous of reading “The Citadel of Lost Ages,” it can be found in Brackett’s 1973 Avon collection The Halfling and Other Stories. What a welcome early Christmas for young (and old) SF fans to be able to spend the week before Christmas with classic issues of these great pulps!} 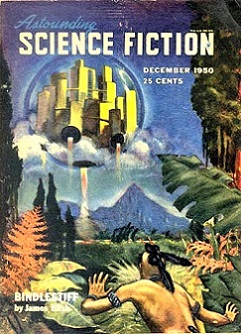 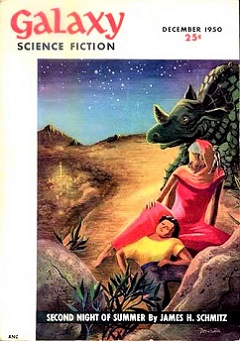 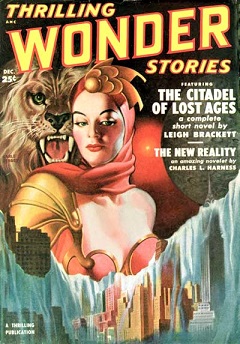